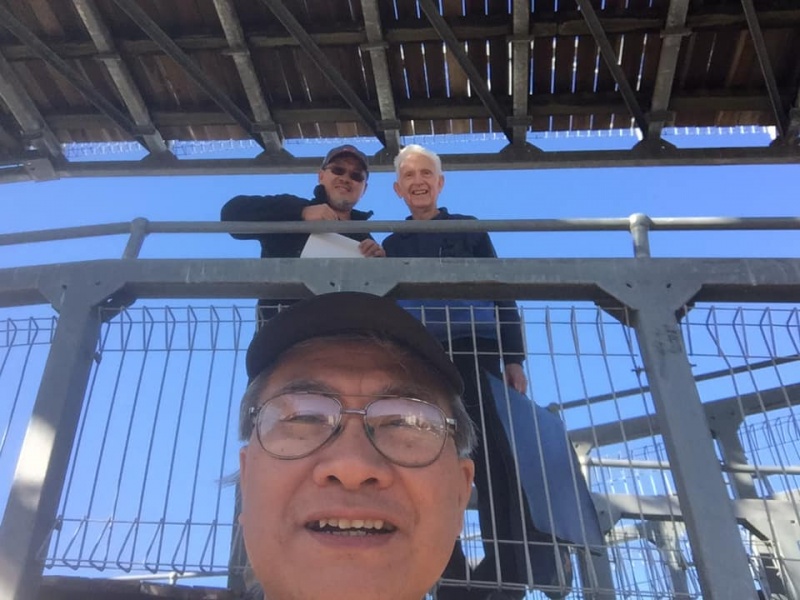 Praise and thanks God that Allen rejoined Johnny and Hung after a long absent today. He took position on the West side with his Intelligent Test flip chart attracting many long and meaningful Chats. Johnny and Hung took position on the East side and were also blessed with many divine appointments. Many showed positive desire to humble themselves to receive Christ with of course many showed indifferent attitude or even rejection. God is sovereign and will save all who are elected even before they are born.
For me, I had 12 divine appointments as recap below: -

1) Daniel a Taiwanese who was willing to chat but cut short by the arrival of the bus. At least nutshell of Gospel was presented.
2) A couple of Cantonese elderly , took the tract but declined for a chat even though I did manage to share them the key issue of sin that no other religion have addressed except Christianity. (老人家,廣東人)
3) A middle aged lady from mainland China let me to chat along and walk with her across the bridge for a nutshell of the Gospel.(大陸女人,邊走邊聊)
4) Kimberly and Kim are two Filipinos young ladies of Catholic background who have no assurance of salvation despite they believed in Jesus. I found it took me a hard time to straighten their misconception that they have to earn eternal life by doing just good deeds after they have received Christ. Can only let go to let the Spirit to do the unfinished work on them.
5) Mr Ng from Quang zhou claimed he had listened to the gospel before but of course showed no real understanding of the gospel. Anyhow, just repeat the gospel sharing while we walked across the bridge. (吳,廣州,聽過，再澄清)
6) Another Cantonese speaking couples with the husband accepting the tract and started reading it. Yet the wife appeared very unfriendly and impatient to stop for a chat. (另一廣東夫婦，夫接單張馬上看，妻婉拒)
7) A young man by the name Chan from Tsun Man , HKG. He is a non-believer but appeared open to the Gospel. He let me walk with him across the bridge as he was in a hurry to report duty for his part time work though he is a student. He was convinced that no human are good enough for heaven and everyone need redemption by Jesus. I testified that this might be the best moment in his life to receive Christ when he found the helplessness of human as a sinner. He promised he will ponder deeply to see what is in store for him by God. (陳屯門，非信徒，認受學生，party time)
8) Monique is an Aussie with a Vietnamese foster daughter. She has no firm religious faith background and believes in being a good person is good enough and all that we human can do. But after my gospel sharing, she was rejoiced to come to the sense that actually there is a way for her to have firm assurance of salvation through Jesus paying a price for our sins in the past and in the future once and for all. She can now answer my checking questions clearly and confidently.
9) Sam a student from Kenya with a friend but only he stopped for a chat. His friend went ahead but called to urge him to go. I nevertheless still managed to touch base on sin and salvation by grace through faith. Sam was soft in heart and willing to stay longer if not otherwise urged by his impatient friend. God has his sovereignty of election of some such as Sam.
10) Some one rejected Johnny but took a tract from me and read it in his car. Pray that it serves the purpose of God.
11) Sean an Uni student and a big fellow from PNG but with a humble heart. He had to rush for an appointment with a friend near by, but still let me share the full gospel while walking across the bridge and appeared very receptive to the gospel and all agreeable to accept Jesus as the only way to be saved for heaven. He was happy to take a selfie with me at the end.
12) A Chinese guy took a tract but declined my invitation to talk.
13) Vanessa a Taiwanese lady with a delightful character and open mind willing to chat but it was cut short by the bus.
14) A young man by the name of Xiao Chang from Jiangso China found common ideology against he communist regime. It helped me to gain creditability to share Gospel to him and he was convinced by me that only God can fix the evil and crooked world and cast out all evil power manifested by the anti human criminal gang of CCP. I am sure God will have His follow up work on Chang (小張江蘇，反共, 欣賞基督教信徒的普世價值) 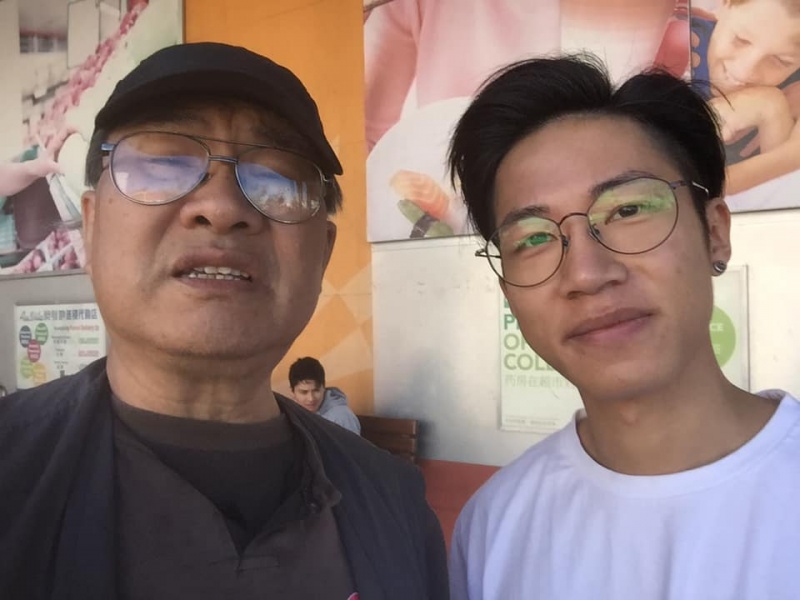 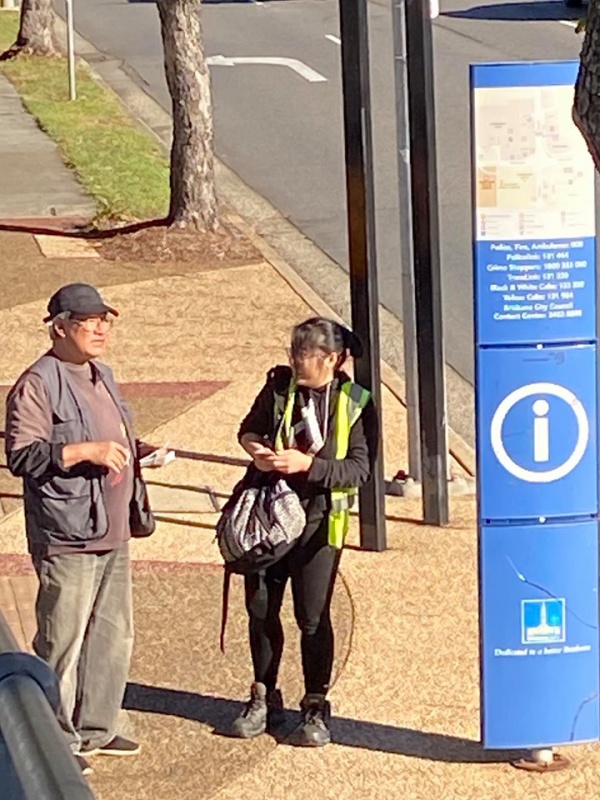 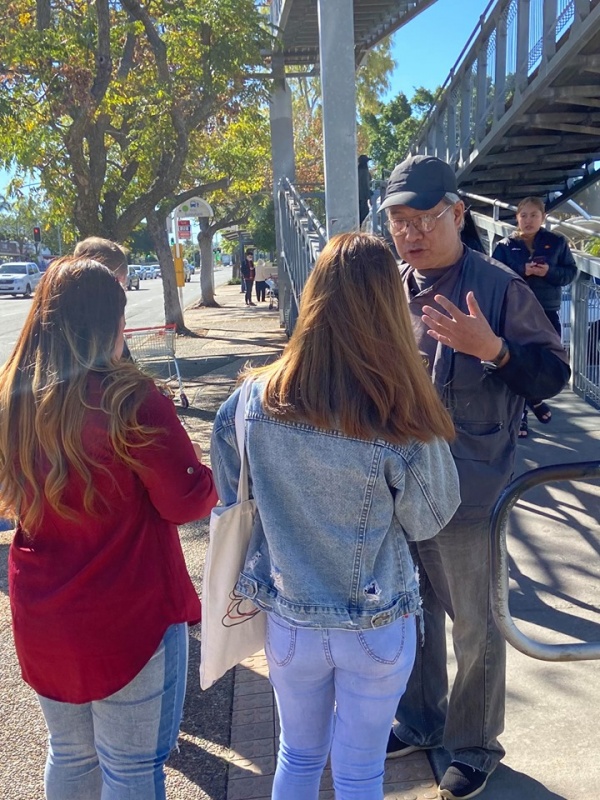 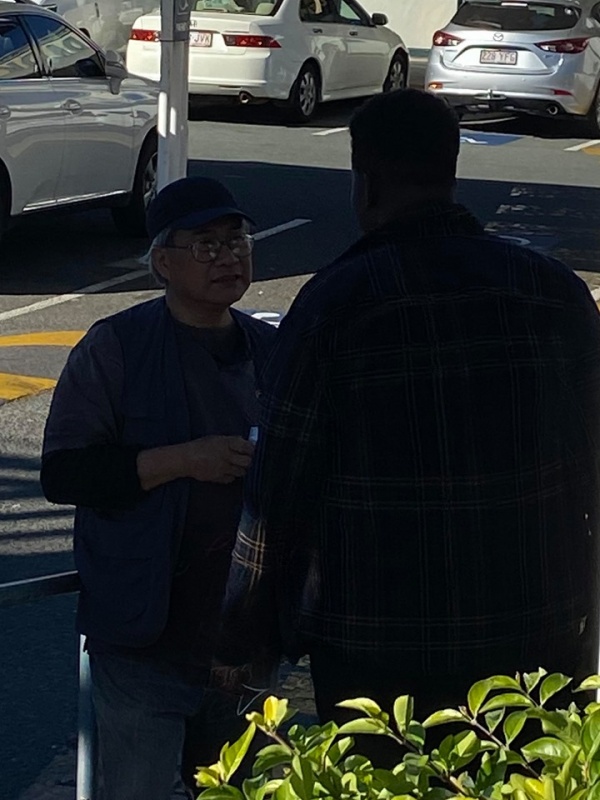 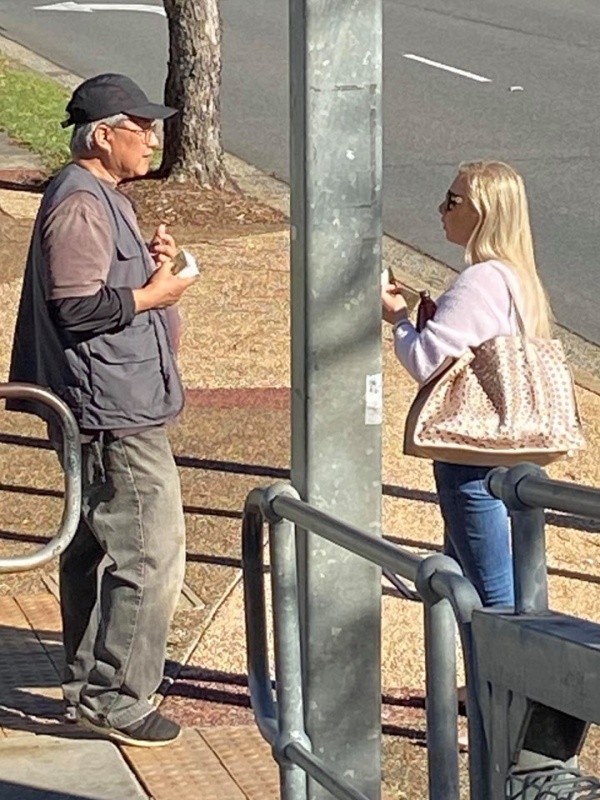 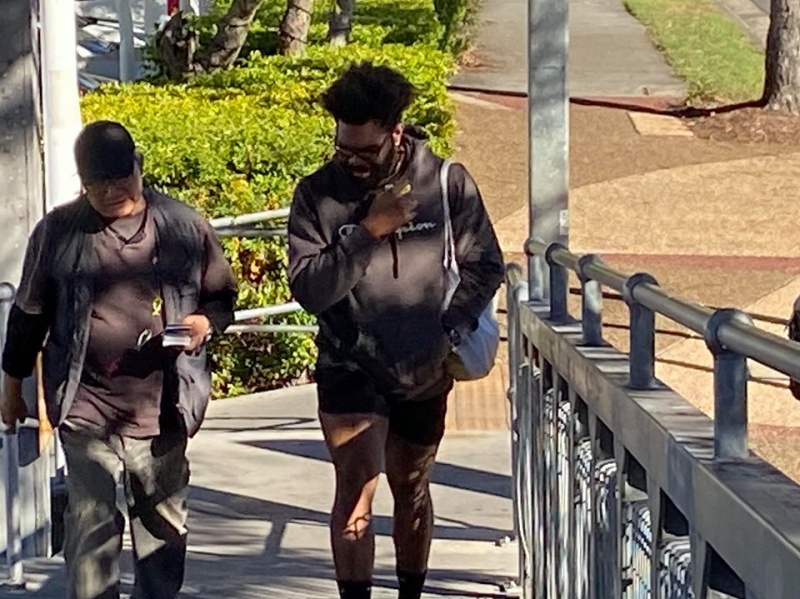 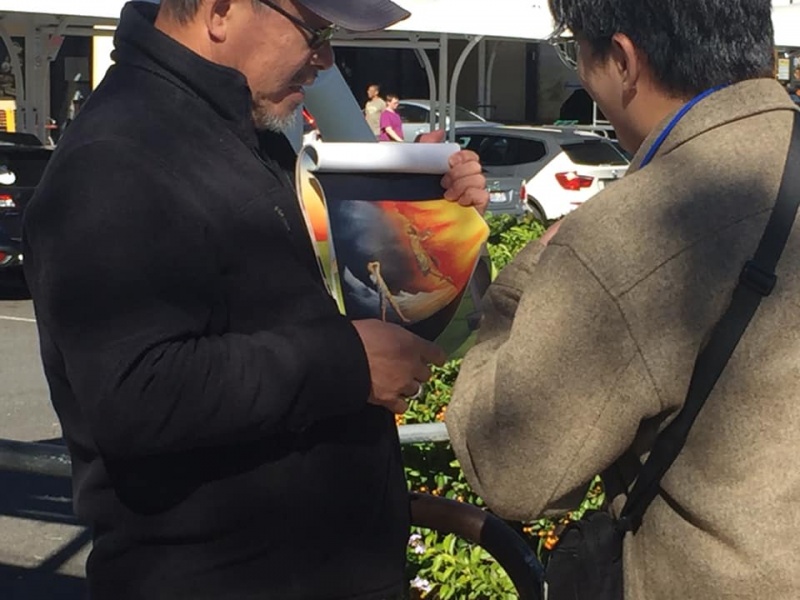 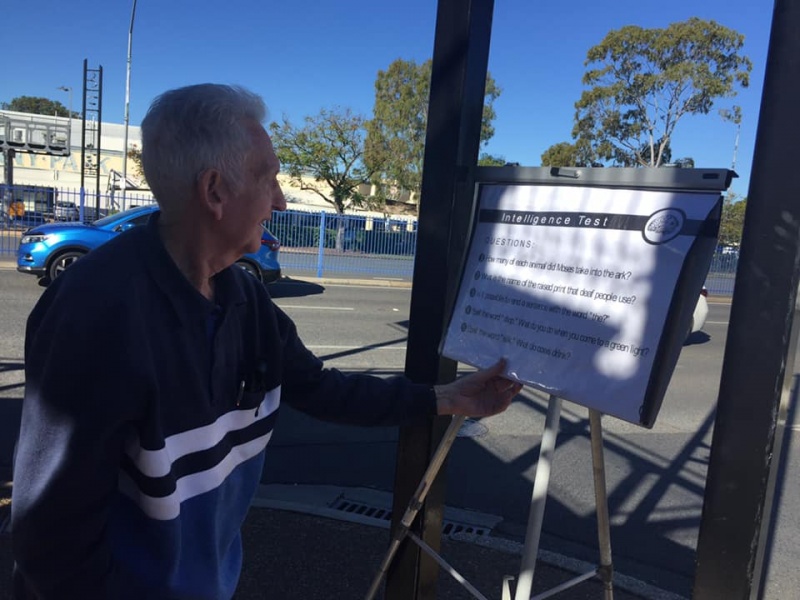 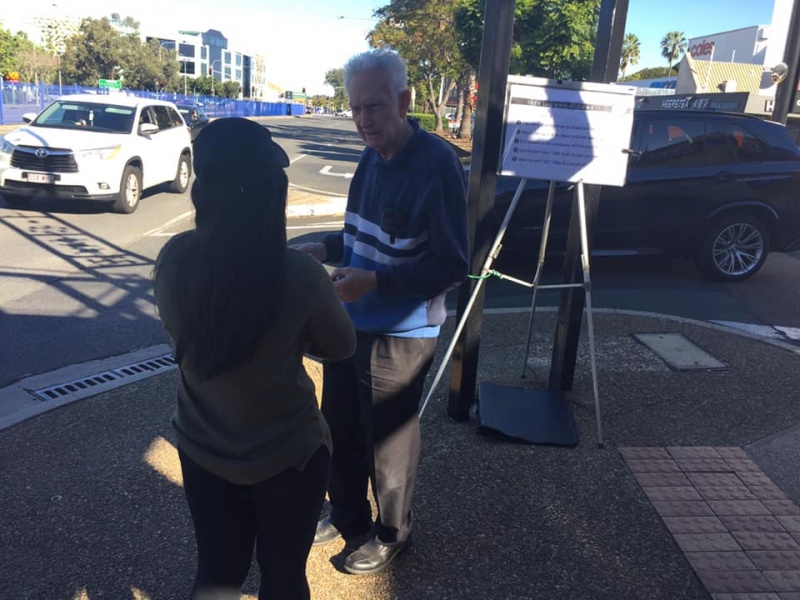 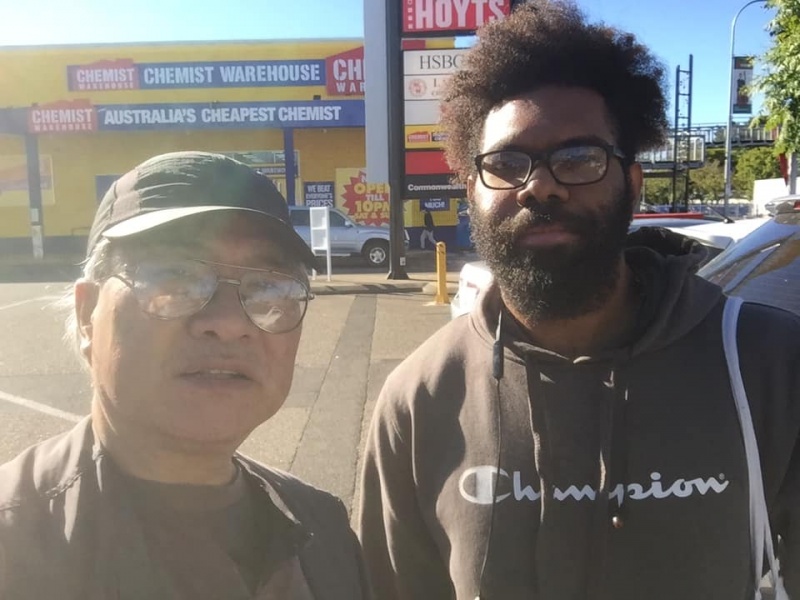