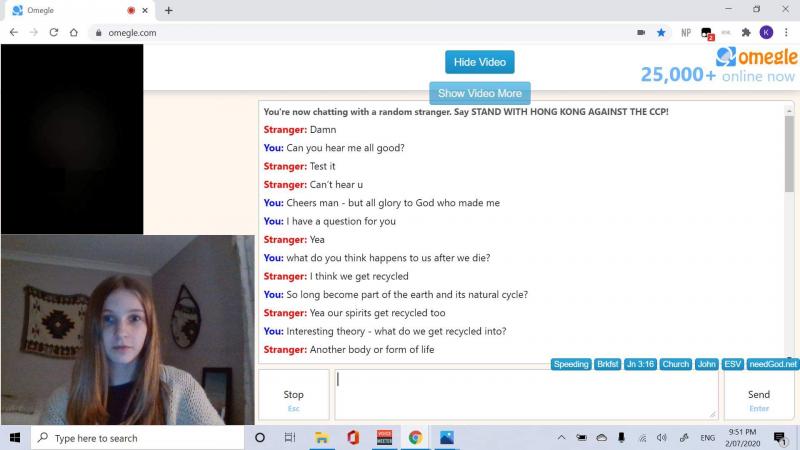 Thursday was another exciting day of outreach, topped off at the end of it all with an answer to two prayers (so stick around)! Usually I write battle logs in third person but occasionally when it is so exciting I will write in first person. It is hard to encompass in words how exciting today was! Over the past few weeks, instead of just sending up a quick prayer, a more lengthy and specific prayer has been put before the God of the universe between each gospel conversation and it has been so worth it!

The reason, each prayer prayed is another opportunity for God to display His glory and He has been doing just that. Each prayer answered is also and opportunity to rejoice in God for His kindness!

The prayer at the beginning of today's outreach, included a request to bring someone across the screen who would not only grasp the gospel but would believe it as well! The first conversation of the day was just that. A guy who initially was being silly, was challenged to be serious about this and the result was a conversation with a man who thought he'd left Christianity behind and today (based on his profession of faith) became his day of salvation! He saw the impact this would make upon how he lived and as a result said that he would start reading his Bible so that he could find out further who God is and see how he should live.

At the end of this conversation, I was able to rejoice, praising God as the sovereign Lord of Heaven and Earth who answers prayers that are for His glory and the good of those who love Him! And then prayed a similar prayer and sure enough God answered it again in the positive. Conversation after conversation!

The final conversation of the afternoon slot was much the same! An Australian who'd had a past with the law and with Christianity and had the right information regarding the good news but was sadly unclear on it being faith alone that made someone right before God. Over the conversation at one point when it was stressed how deseperately I didn't want him to go to Hell he was actually moved to tears! At the end of it all, he knew the gospel well, he understood the impact it would make on his life and this change would be a result of the gospel, not a cause of his salvation, and he too was thankful for the conversation!

The day was glorious already. Nine conversations so far where God had been very kind in answering these requests for someone to comprehend the gospel and believe it, time after time. Cut then to the end of the outreach, the final conversation! I prayed once more, asking God to bring me whomever He pleases, knowing that I can't choose the person I pair with. I also requested that it would be someone open to the gospel, understanding their sinfulness and desperate to hear the good news! Moments later across my screen came an image showing a camera that wasn't working. Intially I was about to skip but the person on the other end hadn't. I said a few things, with no answer but I could hear noises.

Then I typed, "What do you think happens to us after we die?" and seconds went by. I was about to skip but just as I went to press the button, His response came though, "We go to Heaven or Hell". I agreed and then he turned his camera on and started talking. He shared that he was worried, he knew he deserved Hell because of his sin and that he had been trying to overcome some specific sins with very little success. This was noted and I mentioned that it was important but we would come back to that as I thought the gospel would be more important to clarify first.

When asked what he was trusting in to get him into Heaven he shared that he was trying to clean up his life so that God could accept him. With some simple analogies and explanations he grasped the gospel and was surprised and overjoyed. It made sense, the implications made sense and he acknowledged that he could be 100% certain that he was going to Heaven because of what Christ has done and him recieving it by faith! On the basis of this we then were able to talk about how life will look as a result, seeing that Christ is beautiful beyond description. He now understood that the primary desire of his life will be to serve and savour Christ! This was emphasised with a comparison of two stories from Greek Mythology.

There is an island that must be sailed past in order to arrive home but on the island are Sirens (half monster, half woman). They sing enchanting and tempting songs, trying to lure those who would sail past to come to them. These Sirens are surrounded by dead men's bones and rotting flesh from their many victims. As they sing, those who hear their song, get drawn in by the sweetness, lost for the death that awaits them. Having been warned of this upon approaching the island, Odessyus prepared his sailors, by taking a large block of beeswax, breaking it into small pieces and giving it to each of his men, telling them to put it in their ears so they will not hear the song of the Sirens and to row on no matter what he says until they are far away from the island.

He then orders them to tie him to the mast and once prepared they sail by the island. Odessyus as he hears the song, longs to plunge into the waters and swim to the island. He wants to embrace the Sirens. He strains against his bonds so violently that he tears the flesh on his arms and his back. To Odessyus the Sirens look as beautiful as "Helen of Troy", to the sailors they can see them for what they are, hungry and ugly monsters, seeking whom they can devour. But with the wax in their ears the crew are able to sail past, despite the great temptation to their captain. This is how Christians often try to defeat their temptations to sin, in their best efforts and their own strength they try to block out the song.

But there is another captain who sucessfully made it past the island with his crew. Orpheus, known for his great music, as his vessel was nearing the island, he walked to the front of the ship and played a song so much more beautiful than that of the Siren's the crew was so enthralled with his song, they didn't even notice the call of the Siren's.

The point, as Christians we can restrain ourselves and tie ourselves down thinking that in itself will be a solution but a far more powerful tool to overcome the calls of sin upon our life, is to sing the sweeter song. The more beautiful you see Christ to be, the more you savour His holiness, goodness, kindness, patience, love, mercy and justice... the more firmly your gaze is fixed upon Christ, the more the temptations of this world will grow dim, in the light of his glory and grace.

Upon hearing this story Cornelis was greatly encouraged and took the challenge to get into his Bible daily, to see the beauty of his Saviour and the commands and promises He has for him! Upon this he mentioned though that this conversation wasn't an accident! He said, "Five hours ago, in a moment of desperation I called out to God saying, "God, I am far from you, I need you to send someone to talk to me". So in that single conversation God bought together two men from opposite sides of the globe, to answer two prayers, prayed in secret, for the salvation of one soul and the encouragement of another, all resounding to His glory!

There are things that won't happen if we don't pray. There are opportunities missed to praise God if we don't pray and there are priviledges in this life that we will never have in the next. In Heaven, you will never be able to tell someone who does not know Christ of the glories of the gospel. Your only hope to share Christ with an unbeliever is this side of Heaven! Why not start today?