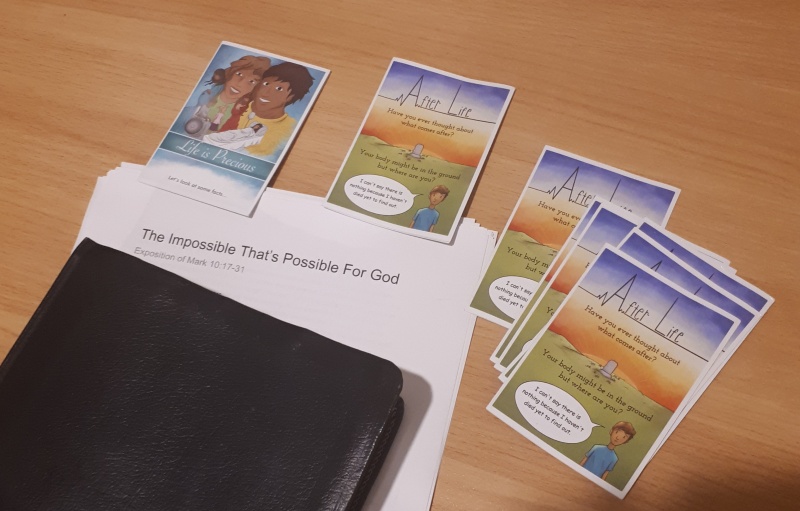 It’s been a long, but very good week.  Writing this report is my last task before a day of rest!

It was raining in Christchurch on Saturday, so I decided to livestream some online gospel conversations instead of heading into the city (although I’m really looking forward to doing a Saturday city outreach again soon).

The conversation that stands out the most from Saturday was the last one.  It was with a young man from Georgia, which is on the east coast of the Black Sea, above Turkey.  It doesn’t cease to amaze me how easy it is to reach people with the gospel through technology!  His parents are Orthodox, but he had clearly rejected it.  Yet he was a sharp thinker, and up for a discussion.

The highlight moment was when he said, “if that’s true, then I can trust in Jesus and then do anything I want”.  I was overjoyed, he was grasping the grace of God!  And yet I was able to explain why we wouldn’t want to “do anything” if we understand what Jesus did for us, and we trust in Him.

On Sunday I had the honour and privilege of being able to preach at the meeting of Grace Baptist Church where I taught on Mark 10:17-31.  Funnily, like the last time I preached, an alarm went off half way through!  Luckily this time it was a security alarm instead of a fire alarm, so I didn’t have to finish off in the open air!

I headed into the city afterwards for a couple of hours of outreach.  I was surprised at how much the preaching in the morning had taken out of me.  So I set up my flip chart, and just concentrated on smiling and handing out tracts.

My first conversation was a hard one.  An older gentleman, a Dawkins devotee, decided to take me on.  He didn’t want to talk, just ram his religion down my throat.  I tried to reason with him, but he was so arrogant and pride filled, that I decided to just listen to him go.  And he really loved the sound of his voice.  I just listened and prayed for him.  I took an opportunity to interrupt him and ask his name and shake his hand.  And then let him continue to lecture me and tell me I need to read everything Dawkins wrote.  Finally he came to a stop, and declared he had won the argument.  I smiled, and he turned to depart, when I asked, “Brian, can I ask you a question?  Have you ever told a lie?”  He admitted he had, and agreed it was wrong.  He admitted to stealing as well.  He hadn’t murdered anyone, but when I said, “Well, Jesus said…”, he started railing again.  I let him say his piece before he finally got bored and moved on.  I said “God bless” as he did.  May the Spirit use the few words of the law that he heard to soften that hard soil.  God willing, he will have other opportunities to hear the gospel.

Soon after that conversation, I had another elderly man walk past, point his stick at me and say, “Protestant Bigotry”.  I said, “God bless you sir.”

I then had a follow up with a regular.  He now knows how to say, “I need to trust that Jesus died on the cross to pay my hell fine”.  Yet it’s clear that he doesn’t fully understand what that means, and so I had the opportunity to continue explaining.  I continue to pray for him regularly.

I had a brief conversation with another elderly man, a Catholic - who heard some of the law, but sadly not any of the gospel.

And I finished the outreach with a brief conversation with two Sikhs.  Sadly, they heard the law, and then shut down the conversation too.

I headed to my car, exhausted.  But not discouraged, because my focus is on the glory of God, and not visible fruit.  God granted me much success today in allowing the opportunities He did.  The results are in His hands.

Thank you, Lord, for saving a wretch like me!

PS, I forgot to take photo's for this report, I hope you enjoy the stagged one! :)