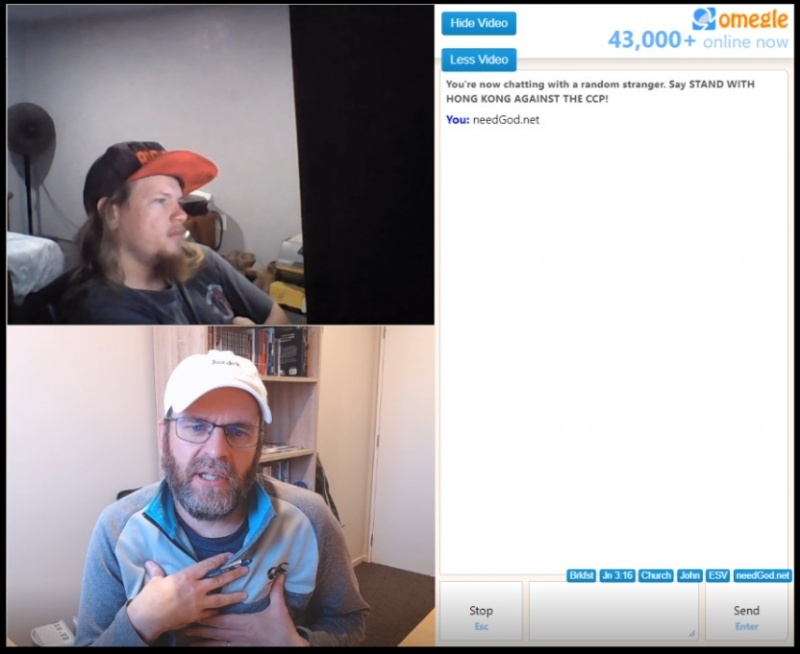 On Tuesday and Wednesday, I spent all my outreach time online.

For Wednesday I tried to keep track of all the gospel conversations for this report.

I started the outreach connecting to three guys from Canada.  I sparred with two of them for a while over how they know God exists - one understood, the other was more resistant.  The third guy claimed to be a Christian.  They were happy to stay for me to take them through the law and the gospel.

Next up I was connected with a guy from Mumbai in India.  His English wasn’t good, but I persisted.  At one point he offered to show me something, I was concerned about what he meant and was ready to turn on my video shield!  But then I realised that he wanted to show me his god.  Which he did, it was an idol.  I was able to communicate some of the law, and start touching on the gospel, before he finally disconnected.

I was then beamed into the office of three Philippine government workers.  They all had masks on.  I struggled to get a conversation going, as only one of them would respond, and that was via typing.  I was able to drop a link to needGod.net before they disconnected.

Someone with no video also responded via text.  They believed in God, heaven and hell.  I started on the law.  They denied stealing, and then went silent but didn’t disconnect.  I continued through the law but they disconnected before I could share the gospel.

An American kid with filthy language was up next.  In response to my standard opening question he responded with “I’m a kid, how am I supposed to know the answer to that?”.  He started to engage when he suddenly had to go.

A very rude and disturbing young man was up next.  He heard the law, but it just made him go nastier!  I disconnected.

Another person with no video and responding via text.  They wanted to go to heaven to see their first horse.  They were very “good” - had never lied, and had never talked back to their parents.  When I explained that anger is the root of murder, they disconnected.

I then was connected with a guy who had a physics degree who was making synth music.  Science was king for him and he was deeply resistant to the God who made him.  Unsurprisingly he denied a universal conscience and was resistant to the law.  I didn’t have the energy to fight him, so we parted ways.

My final conversation before a break started with the guy I saying “Welcome to hell, can I take your order please?”.  It made for a fascinating conversation where he heard the law, and the gospel.  He had “heard it before”, and was resistant.
That was the first two hours, the second two hours went better!

It started with an odd conversation with a “Christian”.  He couldn’t articulate the gospel, so I started working through the law when he opened up about a desire to hurt himself and a struggle with anxiety.  I tried to engage with hope, but we lost our connection.  I was able to leave a link to needGod.net before that happened.

I then started getting into really good conversations.  I had a long chat with a fireman / mechanic.  He engaged and started talking about how the conversation is an “eye opener”.  I was very encouraged.

Next a kid for the USA with a big Canadian flag on his wall.  He was a deep thinker, and there would be long periods of silence as he processed what I was saying and tried to come up with objections.  He grasped the gospel quickly, and after talking about counting the cost, I pleaded with him not to shelve what he had heard, but to respond!

A kid, who first up said he was on cocaine (later he said he was joking)!  He came to understand the gospel, but he kept laughing.  I asked why, and he said he was connected to a group of people who were listening to our conversation.  I asked what they thought about the gospel - he said one of them wanted me as their Dad!  I told them there is a better Dad than me: God.

Next up a guy in deep denial of God - even in the face of proof.  I decided not to engage.

A person with no video you responded via text.  They went silent on me but stuck around.  I shared the gospel before they disconnected.

Second to last conversation was with a guy who heard the gospel.  I said, “So, what’s the reason you go to heaven then?”.  He responded with “Haha, nice one buddy.”  And disconnected.

My last conversation was with some kids who came to grasp the gospel!

So.  That is how my four hour stint of outreach went.  Lots of opportunity for plowing and gospel sowing.  Only God can bring the increase!