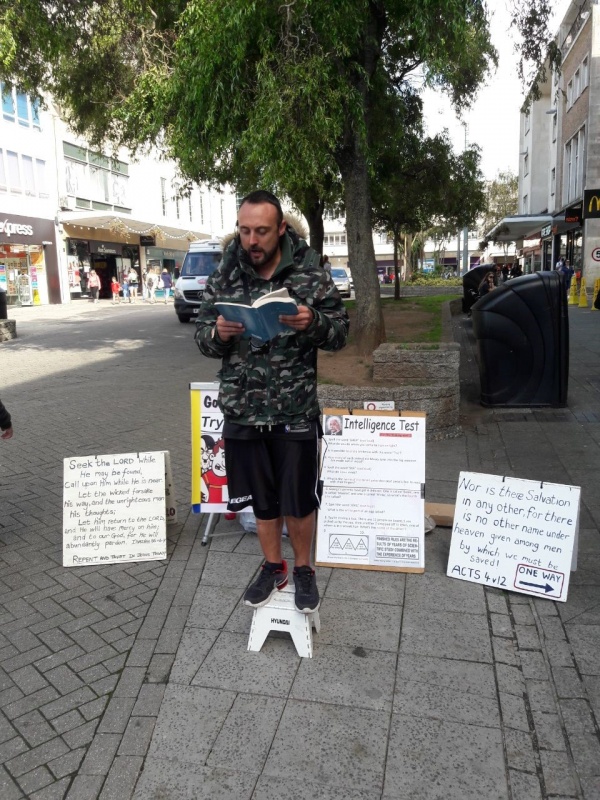 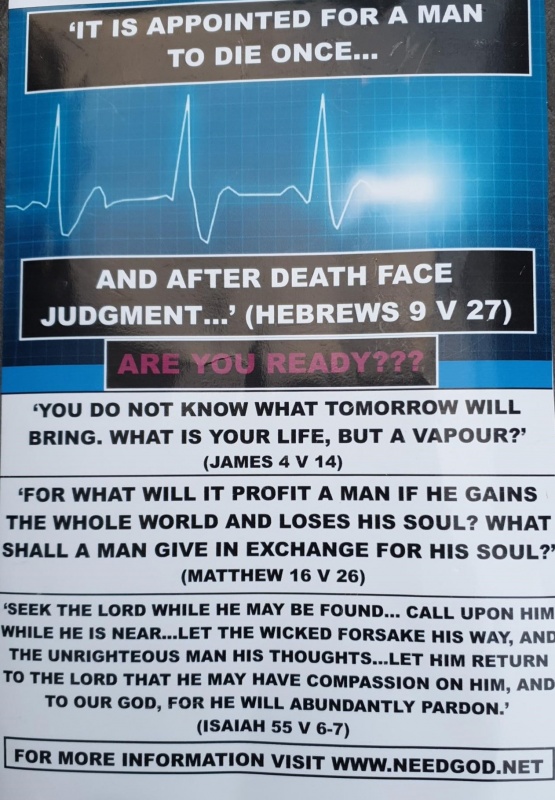 On Saturday Ed, Laurie and myself planned to meet in Plymouth City Centre for a couple of hours of outreach, and didn't expect to have such a packed time and were so thankful for God already preparing peoples hearts and minds that day. After dropping off the outreach stuff and then trying to find a parking space, I asked two passers by if they could watch the back of my car whilst reversing into a tight spot. I said 'than ks a million' afterwards and gave him a million pound note tract, and he was totally shocked. He said he had seen them before somewhere and wanted to use the idea in his advertising business and had been wondering where he could get one! I showed him the tract on the website and gave him an evangelism card and he was very grateful- I explained this was no coincidence but a God-incidence, of all the people walking past at that time and for him to be the one to be there was amazing.

As I was setting up the flip charts etc in town, 6 lads in their early twenties were sitting on a wall opposite eating their lunch, and looking across inquisitively at what I was doing. I told them it was an intelligence test if they fancied it, and they came across to have a go and then onto the good person test. They really listened and were engaged and for around 20 min listened to the gospel message and why they needed a Saviour. They all listened and at the end one of them asked about purgatory and people spending time there to pay off sins. I tried to explain that this was not in the Bible but made up by the Roman Catholic church a few hundred years ago as a way of scaring people into giving money to the Church to try and get dead relatives to spend less time in Hell, but that it was not in scripture and really a scam. They agreed and all took some tracts and a gave a firm handshake which was really encouraging.

Whilst this conversation had been going on, Laurie had been speaking to 2 Catholic guys from Portugal and Poland that were part of a larger group of Missionaries here from different countries. The conversation was about the role of good works and faith and salvation and knowing we are saved as supposed to hoping we will be. The guys did seem to understand what we were saying and mostly agreed, and took some gospel tracts to look at.

Laurie felt led to read a chapter of John 1 for first time and stood up to share this which was a prompting from her Dad, and she was encouraged and hops to continue to do this again. Ed was handing out gospel tracts to people and stopped to talk to a young guy that was interested in taking a Bible and some tracts which was good, as well as a DVD about Dinosaurs in the Bible and the age of the earth.

That day I had read in my J.C.Ryle devotions book Luke 17 v 26-37, where Jesus talked about Noah and the judgment of the worldwide flood, Sodom and Gomorrah and Lot and his wife, and future judgment to come before Jesus returns. I tried to show people that in these really challenging times we needed security and hope to know where we would go when we died, and the judgment that fll on people before would one day fall again finally.

I was holding a Bible in my hand, and a man stopped to listen and then started to engage with me saying we cant trust the Bible as it was written by men and had been changed lots of times and was written before he was born. He said it couldn't be trusted and was full of contradictions. I asked him to tell me when the Bible had been changed and what the contradictions were. Funnily enough he had never actually read the Bible, but attended a Catholic Church with his daughter, but didn't believe in God. This was a perfect preaching opportunity, and so I tried to show the man the foolishness of his position, how we can trust the Bible, how there are no contradictions, that its the most read and studied book ever and many people who have started off as atheists anting to discredit it, have actually ben saved from reading it and know it to be 100% accurate.

I spoke about the Dead sea scrolls, and how without God and believing in evolution and the Big Bang, people have no idea where we came from, why we are here and where we are going when we die. The gentleman continued to shout and argue, which drew a crowd of about 20 people, and a man who had stopped to listen asked the man about Shakespeare etc and if he believe he existed before he was born. The mans very strange stance was exposed and people could see his argument was non existent, and the man listened while I tried to show him he didn't want to read the Bible because of sin, and that any excuse not to believe it was being used. He put on his sunglasses and actually became quiet and listened, I offered him a Bible which he didn't accept, but he did take some tracts and the two DVDs and he shook hands before leaving.

A few of the people that had been listening stayed while I finished preaching, which led to some conversations to different people listening; a young lad took a bible and tracts, two women took bibles and tracts that Laurie said were listening intently and looked concerned. She told them it's true and its important to think about and take action on, to turn to Jesus. A man had been sat listing listening and took some tracts, and we managed to speak to the man that was a Christian that had engaged the heckler. We all had a great chat with Steven and his family that were previously from London but now pastored a Church in Exeter. He said he had come away from the Anglican Church and was now part of the Free Anglican Church, and he had been praying to meet others to go out onto streets with, he is reformed, likes Living Waters ministries and we exchanged numbers to meet in Exeter one Saturday to preach which was really encouraging for both of us.

Laurie also had a chat with older gentleman called Edward who had asked questions about channeling spirit guides. She said that the Devil masquerades as an Angel of light, and he said that made sense. She told him the gospel and he said he believed that Jesus is the only way of salvation. Laurie gave him a bible and he said he would read Matthews gospel and digest it well! .

It was a truly amazing day and we prayed afterwards for the people we had spoken with and handed out tracts too, and were particularly encouraged to meet Steven and his family and hopefully team up together soon. 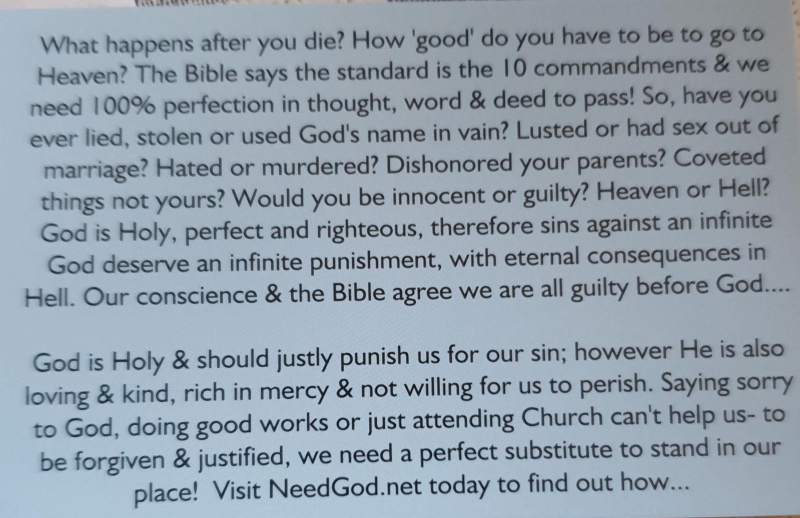 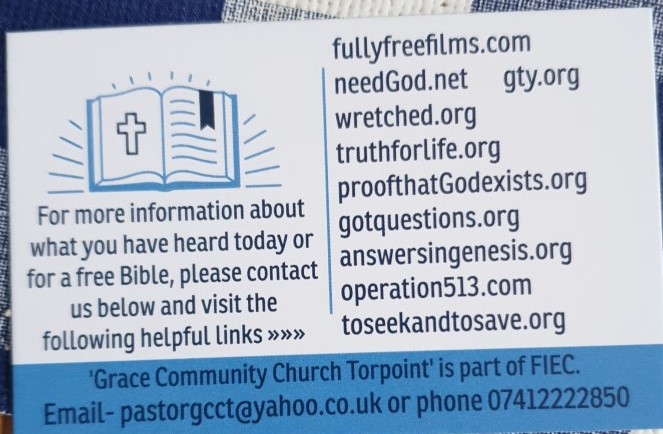