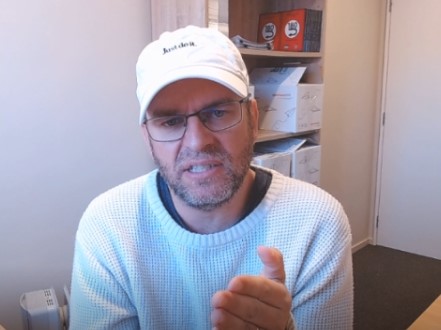 On Tuesday, to get myself going, I started with an online text chat, and it didn’t start well:

You: In the same way, we know there is a universe maker, that had no maker that made this universe
Stranger: <bleep> and stop spreading that <bleep>
You: It is hope
You: Because God is so rich in mercy
Stranger: no it is <bleep>
You: Why the anger and hate?
Stranger: because you are trying to force me to believe in something i don't
You: Impossible
You: I can't force anything on you.

I ignored the toys being thrown out of the cot and persisted, and surprisingly the person calmed down a bit:

Stranger: wait time out can i ask a question

Amazingly, I was able to share the gospel!  Yet they were still very resistant.  Eventually they opened up about suicide - and I was able to speak words of hope before they disconnected on me.

I then switched to video chat and had a number of conversations.  The final one went long.  I was talking to a guy from India early in the conversation he asked me about “batting”.  I instantly knew he liked cricket - something I enjoy myself!  Instantly the conversation became very warm.  We talked about cricket players from New Zealand and India for a while.  But I brought the conversation back to spiritual matters.  He heard the gospel.  But the concept of justification by faith alone was so foreign to this guy, that I would explain it to him, and then ask him to explain it back, and he would instantly revert to his goodness as why he would be justified!  He was open, and so I took the time to labour with him.

Later, there was a team of four in Riccarton - Roger had two friends with him.  We had a good time sharing the gospel with a number of people.

The highlight conversation for me was with an older guy who had been with the Jehovah’s Witnesses for three years - but he “couldn’t hack the pace”.  He was very aware of the fact that he wasn’t a good person, so I was able to focus on the good news of the gospel, and labour with him on it.  He came to understand (checking questions confirming) and really appreciated the chat.  I gave him follow up contact details - oh Lord, change his heart!

Wednesday was sunny, but there was a strong wind.  I’m glad I didn’t have my flip chart!

I started in Cathedral Square.  I approached all the construction workers.  A lot of them said they had already received tracts and weren’t interested in talking.  But I persisted and one of the Phillipino guys opened up to a chat.  I didn’t have long with him, as he had to go to work, but I was able to share the gospel.

I started to move towards Cashel Mall when I encountered a fellow evangelist, and we ended up sitting down for a brief chat of encouragement.  In the middle of the conversation three people walked past, and I suddenly decided to engage them.  One was not interested, another so so, but the third decided to take me on.  It was quite a fiery conversation - he was very resistant to the logic I was presenting.  I soon discovered why.  He had been a Christian for ten years, and it hadn’t worked out for him.  I instantly asked him what Christianity was about - specifically, what you have to do to go to heaven.  Unsurprisingly he explained how you need to go to church, and be a good person, and maybe you would go to heaven.  I told him he had never understood what Christianity was.  His comeback was, “I was taught by good Southern Baptists”.  Inwardly I sighed.  He’d had enough and decided to disengage.  We parted on good terms and with hand shakes.  To my surprise, he accepted a gospel tract!

From there I started walking towards Ara.  At the basketball court on Manchester street, I saw a guy with a camera and decided to approach.  We fell into an easy conversation.  It turns out he was American and worked with the Antarctic program.  He heard the gospel, but he wasn’t interested.

To finish the day, I was back online with the Aussie team.  I had two highlight conversations:

The first was with a guy from South America.  Using Google Translate, he came to understand the gospel.  But then he asked: And what if I am bisexual?  A very good question, I was honest yet loving in how I answered.  Sadly he disconnected.

The other one was with someone who didn’t show their video and only typed in reply to what I was saying.  He heard the gospel, and then I started working through the checking questions, explaining repentance, and the cost of trusting Jesus died for our sin.

I started talking as though Jesus had died for his sin.  I asked him when he had done that, his response: 5 mins ago.  So I pointed him to a Bible and to a local church: 9marks.org/church-search/  He is from Toronto in Canada.

He then started asking questions, e.g.:
Stranger: i don't wanna be rude but are u from new zealand or australia?
Stranger: does it cost money to go to church?
Stranger: are u at a church right now?

So a wonderful couple of days filled with gospel conversations.  The gospel is so wonderful, and I’m blessed to listen to it time and again as I try to explain it to people.  Thank you for your support of this work in Christchurch (NZ).