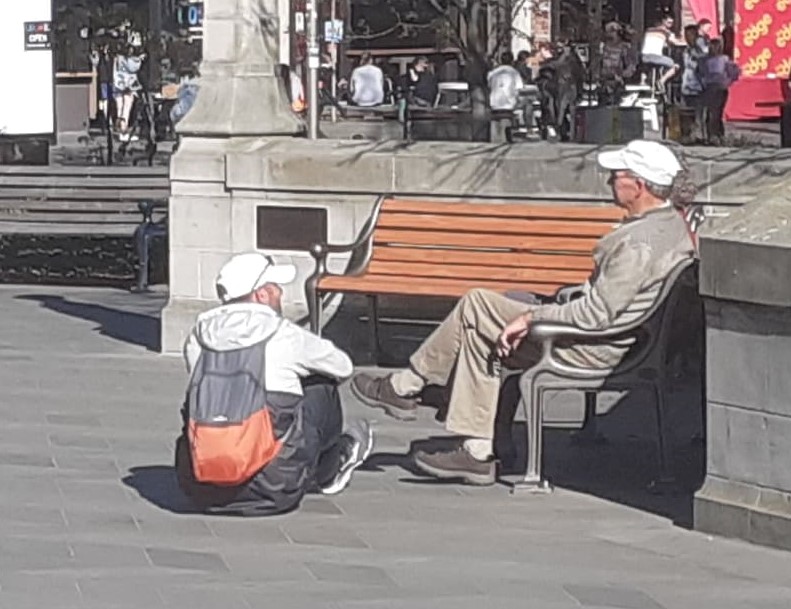 I have a lot to write about the outreaches over Thursday and Friday.

I started with online outreach Thursday morning.  My first conversation was with a young lady who didn’t know who Adolf Hitler was! :(  She heard about the serious nature of sin as I explained the law of God to her.  But she wasn’t taking the conversation seriously.  I didn’t share the gospel with her.

For the afternoon, Andy and I were at Northlands and then Eastgate bus stops.

At Northlands I had a guy walk past who responded to my opening question by staring at me for a while.  I couldn’t read him.  He finally said something very intellectual.  He was very resistant, but he wanted to talk - so we had a long conversation.  Early on, one of his friends joined the conversation.  I persisted with the conversation because the friend was not as resistant - he even helped his friend understand the logic he was so resistant to.  When the conversation finally wound down, after I’d been able to take them through the law and the gospel - they accepted tracts as we parted ways.

Friday started with the gospel + abortion outreach which you can read about here.

After that, as we were walking past the Bridge of Remembrance on the way to Cathedral Square, a guy biked past who suddenly slammed on his brakes!  It turns out it was a guy I had talked to at the Northlands bus stops a month or so earlier.  He had been thinking deeply about the gospel conversation we had had - which was very encouraging.  The conversation became quite pastoral, as we talked about why we can have an assurance of salvation, and why we should take drastic measures to flee from sin!  He said our meeting again had been an answer to prayer, and he said he would see me again in heaven!  I certainly hope I see him again before then!  I encouraged him to join an outreach team.  He knows how to get in touch.

There was the unusual gathering of preachers and hecklers in Cathedral Square.  The lone ranger preacher was preaching when we turned up.  At one point, he had two hecklers getting stuck into him.  To the shock of everyone, a third guy walked past and pulled the preacher off the statue he was standing on!  He crashed to the ground on his back!  He was very startled, but he quickly jumped back up and continued preaching.  He wasn’t himself initially - he became very defensive.  After a few minutes, our eyes met - I mouthed: “are you ok?”  He smiled back - thank God he was okay!  Sadly, one of the hecklers continued heckling him in a nasty way.  The guy who committed the assault left the scene so fast, everyone was trying to work out what had happened.  We will be extra careful in the future.

Marty and Andy preached.  I spent my time in one to one conversations.  Last week I wrote about a man who completely lost it when I told him: “the root of change is in Jesus”.  Well, he turned up again today, and he came over to me to apologise.  It was very good to see him in a more sound state.

Later in the afternoon a team of five were at the Bridge of Remembrance for one to one gospel conversations.  Roger seemed to have a busy time on his flip chart (pictured).  I went roaming and managed to have a number of wonderful conversations.

Firstly, I approached a group of kids on the grass and managed to get a good conversation going (pictured).  Many of them were “Christian”, sadly, none of them knew the gospel which I attempted to remedy before they had to go.

But the stand out conversation was with an elderly couple (pictured).  I approached them in my usual manner completely expecting them to reject me.  But to my surprise, the gentleman was open enough to allow me to continue, and continued to open up as the conversation progressed.  Just before I was going to share the gospel, he switched the conversation from spiritual matters to natural matters (where are you from, what do you do, etc).  I followed his lead, but gently kept trying to get the conversation back to the gospel.  Eventually I was direct, and asked if he wanted to hear the good news.  He did!  He accepted a follow up gospel tract too.  I was overjoyed.

Mike and I headed out for the Friday night outreach in the central city.  One of Mike’s conversations is pictured.

But before Mike arrived, I had a number of opportunities to talk to people (3 in fact) - all of whom heard the bad news, but didn’t want the good news!  One of the guys, just suddenly turned and ran off!  He ran straight into a pole, which he dodged at the last minute, and then ran down the street!  Welcome to my life!  I gave a tract to his mate (who had a bemused smile on his face), and asked him to give it to him.

The evening finished with conversations with some of the “punks” (for want of a better word) who were getting drunk.  I was able to finish a gospel conversation with one of them that I had started two weeks earlier!  Glory to God. 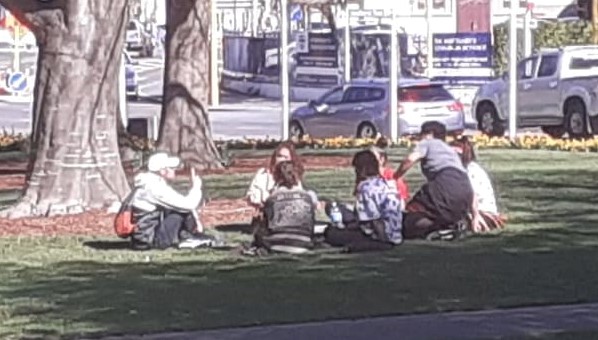 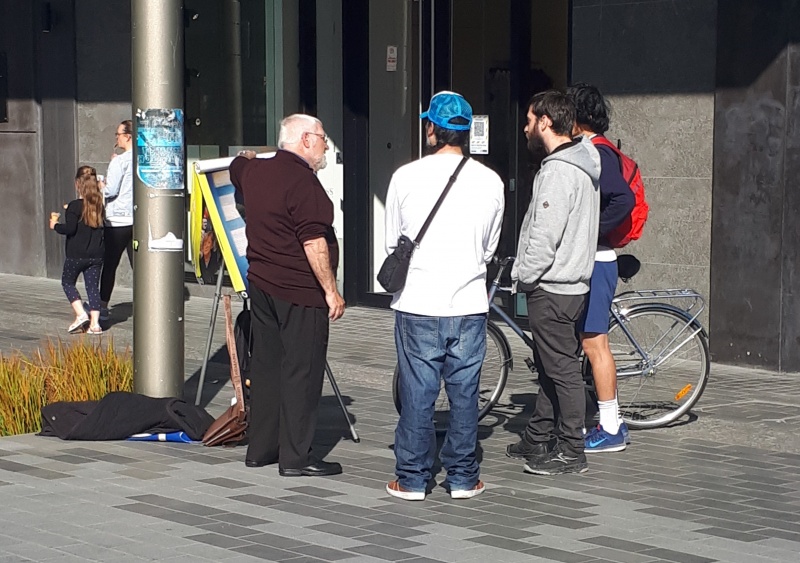 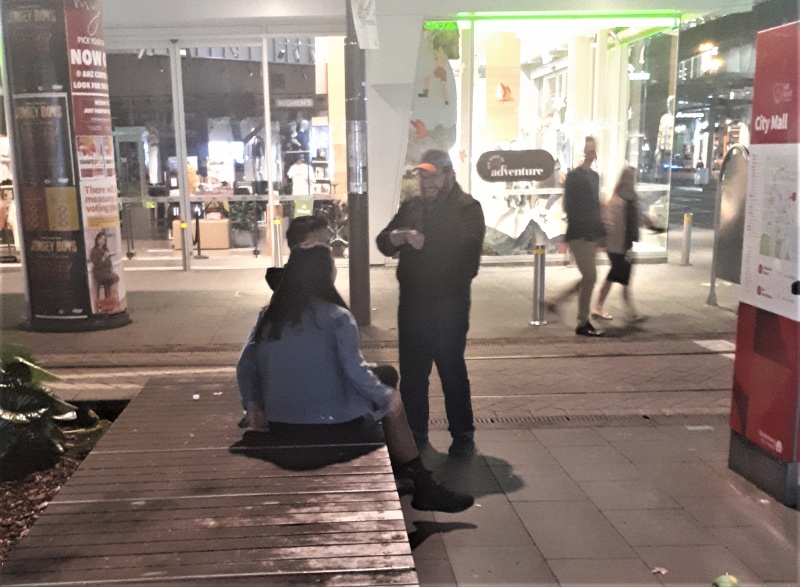 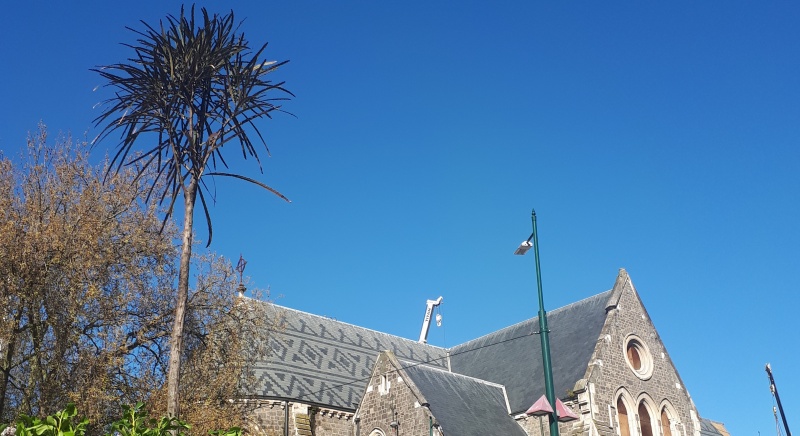