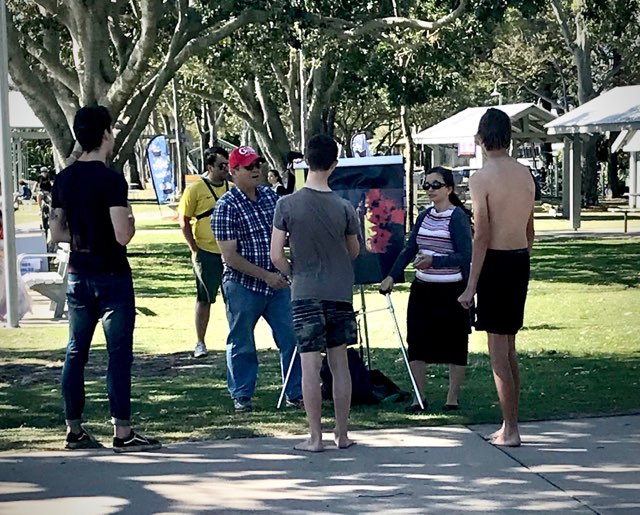 On Saturday, the outreach at Bribie Island was a huge encouragement.  After our team of 11 gathered, we prayed, and then split up.  Some put Gospel tracts on the cars parked up and down the streets, while others took a walk down towards the bridge, up the jetty, or towards the carpark to distribute tracts and talk to anyone who would engage.  Our literature table and the Good Person flipchart were also set up.

Before we had finished setting up, a young man from East Timor wanted to know what we were doing.  He spent over an hour talking to several of the team members.  This young man was a new Christian, and he had a lot of questions about his faith.  Having come from a Catholic family, he had always thought God existed, but it had never been a personal relationship.  Contradictions he had seen and heard in his family and school caused him to start searching for the truth.  He had then traced a well-known apologist’s journey to faith.  He said that over the last year he had been studying his Bible and had renounced any hope of his works being able to save him.  Now his hope was in Christ alone.  It was wonderful to be able to hear his story and to encourage him in his walk.

Two young boys approached the flipchart with their dad, who was friendly and open to us talking with his boys.  As we went through the law, they had some thoughtful questions, which showed they were paying attention to what was being said.  One asked, “If God judges people, doesn’t that make Him a bad person?”  Another question was, “Is it fair for someone else to pay my fine?”  Their questions were answered, and they realised their need to trust in Christ.  They took Gospel tracts, and then came to the literature table with their little sister for a Bible and some other literature.  Please pray that the truth would sink into their hearts to challenge and change them.

Three young men also went through the Good Person test.  They were urged to think seriously about this question of where they would spend eternity, as it would be the greatest question they would ever face.  Two of them seemed to find it a bit amusing, but they both took a Gospel of John.  The third of the group, however, stayed to go through the flipchart again with another team member.  After talking for some time there, Kierran came and took a Bible.  He wanted to know how much it cost, but was told that it was 100% free, because someone had already paid for it on his behalf.  He said he’ll definitely read it.  He was also able to have a long conversation with a local pastor, and they exchanged phone numbers.  Please pray that God would do a work in the life of this twenty-five year old.

A pastor who was with us did some preaching and gave a wonderful Gospel message.  It was a blessing to notice that some nearby people were listening.

Pray too for Ben, a young man who listened to the Gospel message.  A number of others also had the Gospel shared with them, but some left before they could reach the explanation of the way to heaven.  Pray that their consciences would prick them and drive them to Christ.  Please pray for fruit from the tracts that went out.  We ask that you would give thanks for answered prayers.  We are grateful that God has once again prepared the way for an encouraging outreach as the Gospel went out.  May souls be saved and God glorified here at Bribie Island. 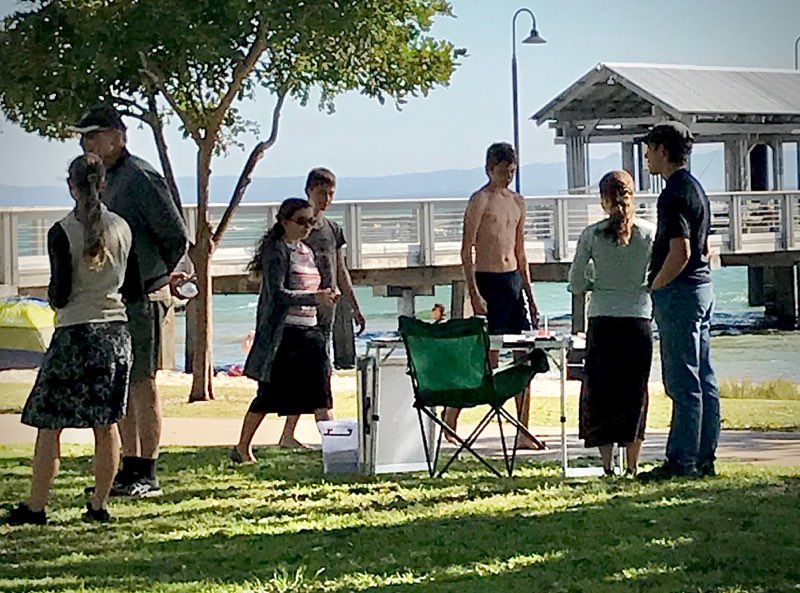 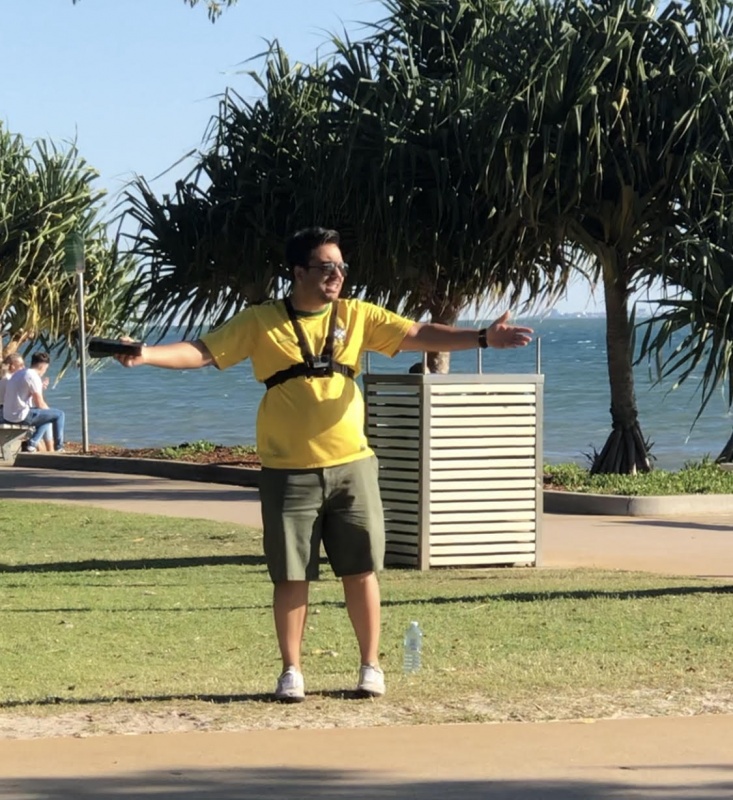