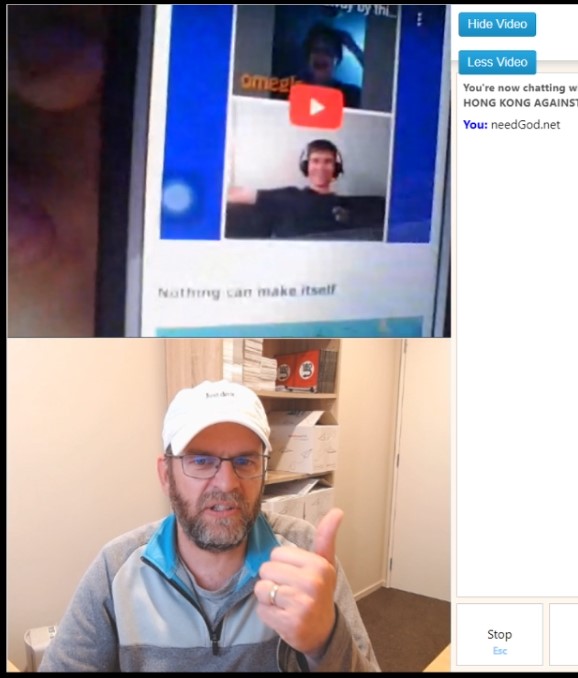 Saturday I decided to go online instead of head into the city.  A couple of hours in the morning, and a couple in the afternoon (with the Brissie team).

In the morning I had two highlight conversations.

The first was with a guy who looked suspiciously naked from what I could tell at the edges of my video shield.  Normally people like that take one look at me and disconnect.  But strangely he didn’t.  I expected him to leave at any second, so I just started trying to share as much as I could about God before he left.  To my surprise, he started responding via text.  He said: “I’m practicing my posing for a bodybuilding competition”.  So I asked him if he believed there was a God.  He responded with “yes of course”.  And we were into a discussion!  Safe to say, I kept my video shield up!  I was able to take him through the law and the gospel.  It turns out he had a Muslim background.  He gently resisted initially, but to my surprise he softened.  At the end he said: “Yes I see ur point”.  And then when I asked if he could see how this is good news, he said, “yea def”.  He received a link to needGod.net.

The second was with a man from Dubai.  Initially he was being a bit silly, taking the serious things I was talking about lightly.  I decided to verbally jolt him - expecting him to bail.  But he didn’t, he sobered up.  I was able to share the gospel, and he seemed to really appreciate the conversation.

In the afternoon I had four conversations before getting into a long chat (nearly 50 minutes) with a young guy and his friend.  This guy seemed genuinely impressed that I was online sharing the gospel.  It seems he is a recent convert and so I was able to give him lots of encouragement, and clear up some confusion he had in regards to Catholicism (which his friend was).  I shared a link to needGod.net, and he checked it out on his phone - he was instantly excited because he recognised Ryan!  He had been watching the gospel video clips on Tik Tok!  He was genuinely excited to know that he was talking to someone on the same team as Ryan.  And it was so encouraging to me to hear of the impact the gospel videos on Tik Tok were having.  Thank you Lord, all glory to you!

A couple of conversations later, and I got into a chat with a young guy who melted when I gave him the building / builder - universe / universe maker analogy.  It really clicked for him, and he became very open to the law and the gospel, which he was familiar with, but didn’t really understand.  It was a wonderful chat.  Lord, save him.

Sunday afternoon saw two outreaches for me.  The first was in the city with Andy.  Andy was in fine form getting people to stop and chat - walk up style.  He was in conversation after conversation.  At one point he was in a conversation with a guy who started throwing coins at him!  He was mocking Andy somehow.  The guy left, but the Hara Kirstina’s were out evengelising in the same spot and one of them asked me if he could take the coins!

The Hara Kirsina’s were busy, getting into conversations, and selling books.  But Andy & I kept pace.  I’m starting to get to know one of them, he even shook my hand today.  They don’t want to waste time with us - but I’d love to get to know them, I’d love to be able to share the gospel with them.

I had some great chats.  I’ll mention two.

The first was with a guy who I didn’t expect to stop.  We had quite a long conversation.  Initially I thought he was a Christian, but little warning signs were showing.  He then started talking about baptism being required for salvation.  That was a loud warning!  So I took him to the flip chart to start confirming what he understood.  He ended up saying, “I need to trust that Jesus is the son of God”.  I corrected him by saying, “You need to trust that Jesus died on the cross for your sins”.  Finally I said, yes, Jesus must be God.  And then he said, “oh, you believe in the trinity”!  He denied Jesus is God.  I should have known, but it was the fact that he said he went to a Baptist church that threw me.  I explained why Jesus must be 100% man and 100% God.  He left with a tract.

The other chat was unexpected.  I was rushing home to be ontime for the online outreach with the Aussies when I noticed an elderly man trying to wheel his wheelchair without much success.  I hurried past, but then I caught myself.  I went back and asked if he needed any help.  He said he needed to get to the bus exchange.  It would make me late, but I knew I had to help.  As I was pushing him, I introduced myself, and then I realised I had a gospel opportunity on my hands!  As I wheeled him to the bus exchange, I was able to share with him.  He seemed resistant initially, but he didn’t fight.  He took a tract.

I finished the day online.  I had two outstanding conversations: 30 mins, and 1 hour 30 mins!

The 30 min chat was with two girls from the States.  One of them said that she was going to skip me initially, but that she was glad that she didn’t.  The both seemed to really appreciate the conversation.

The 1 hour 30 min chat was with four guys.  They were up to no good - so God sent me their way.  There was a real mix of beliefs among them.  One of them was genuinely stoked to realise I was online to share the gospel, and he positively influenced two others.  The fourth guy was Atheist - but he was keen to chat.  They all heard the gospel multiple times, and then they started taking turns to ask questions - good questions.  I ended up with the Atheist and we talked for a while.  He eventually opened up about why he was suppressing the truth about God - he is bisexual.  “Am I damned?”, he asked.  Without compromising the serious nature of the sin of homosexuality, I was able to explain (again) the amazing good news of Jesus - even for homosexuals.  What a privilege!

Oh Lord, please save people through our feeble efforts to share your amazing gospel.