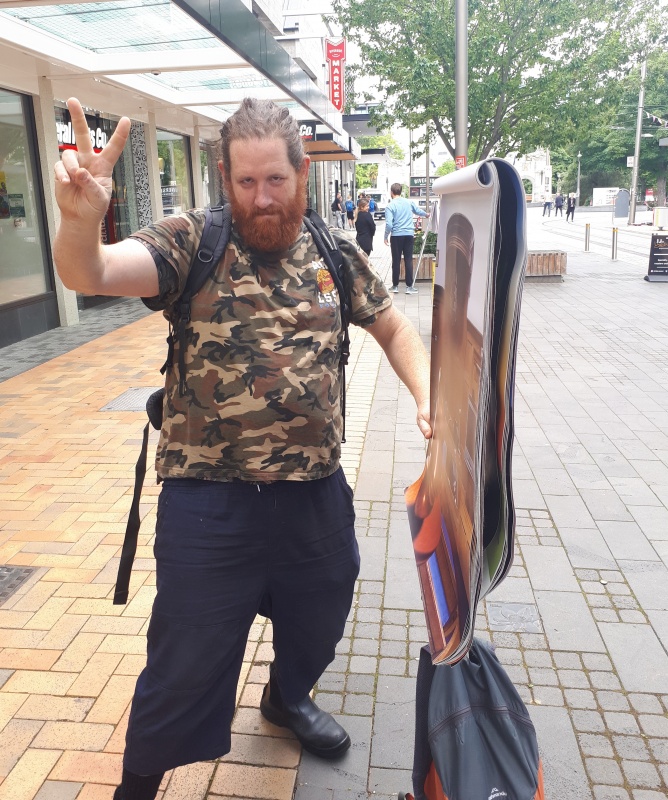 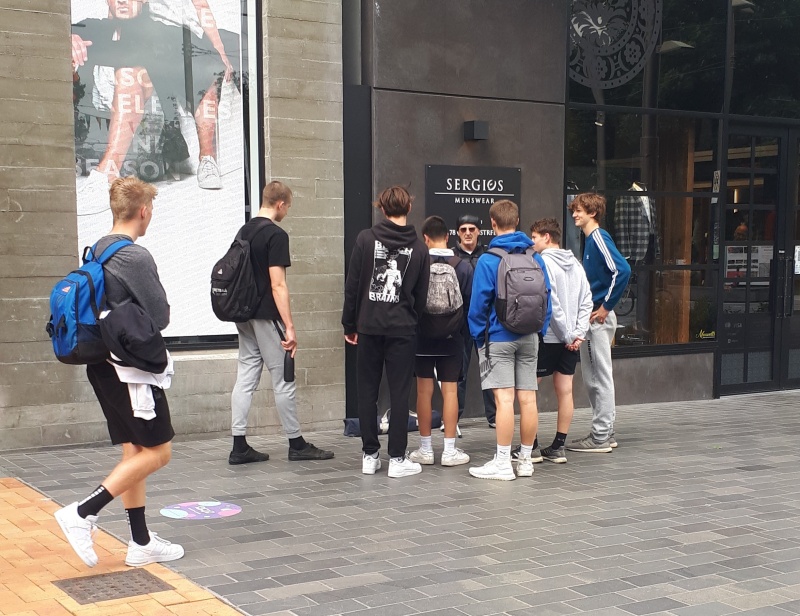 A very interesting two days of outreach.  More street outreach then usual.  The Canterbury A&P show would have been on this week - if not for cancellation due to Covid-19.  A couple of evangelists from the top of the South Island came to join me in outreach anyway.  So good to be able to work with them today!

On Tuesday I spent some time online before heading to Riccarton.

I had a wonderful chat with a Muslim man from Algeria in North Africa.  He was open enough for me to be able to share the grace of Jesus through faith alone - but he was deeply resistant to it, the idea was so foreign to his thinking.  But he was nice about it, and I was able to gently labour with him.  He would talk for a while, and then I would bring him back to the serious reality of our sin and the only hope for forgiveness.  Slowly it started to dawn on him.  I think he started to grasp what I was saying, but he was still resistant.  He started gently attacking the concept of the Trinity as illogical.  We parted on good terms - him with a link to needGod.net.

I also had a long chat with a guy who was quite self focused.  He’d had Christian instruction in his life, but didn’t understand the gospel.  So I was able to share it.  He also left with a link to needGod.net and encouragement to start reading his Bible again.

Roger joined me in Riccarton.

I was into gospel conversations pretty much straight away.  I had three highlights, with: a Christian, an Atheistic Philosopher, and a Hindu.

Two teen girls went past, one wanted a tract and so approached, the other decided to take one too.  When asked: “what do you think happens after life?”, the second girl said, “heaven, of course, I’m a Christian”.  Amused, I asked her what she had to do to go to heaven, and she said, “be a good person”.  So I explained God’s law to show them that we weren’t good.  And then explained the gospel.  It clicked very quickly for her.  She seemed a bit sheepish.  She said she would discuss this with her youth group.  I encouraged her to do so!

The philosopher (studying at the university) had a religious background, but had moved away from it.  We talked about knowledge, how we know God exists, theodicy, and how we know right from wrong.  Amazingly, I was even able to touch on the gospel.  But he really wasn’t open. I could see him gently digging in and I could see it just being a mental battle.  He was blind to how he used himself as the judge of things over and over, and he didn’t even realise it till I gently pointed it out.  It was a good conversation, but I decided to end it with a handshake that he accepted.

The last conversation, with the Hindu, was fascinating.  He was extremely open to the conversation, but he was the most resistant to the idea of salvation as a gift of anyone I’ve ever talked to.  Over and over I would explain, and then ask a question to see if he was starting to grasp - and over and over he would revert straight back to the idea that his goodness would get him to heaven!  At one point I put my hands on his shoulders and looked him directly in the eyes as I pointed out that he’d done it again!  But it was a pleasant conversation, and I didn’t mind labouring with him till he finally seemed to grasp and hold the gospel in his mind.  But still, he just wanted to add it to his patheon.  The final page on the chart challenged him on the cost of accepting the gift, and when he realised he would have to let go of Hinduism to trust that Jesus had died on the cross for his sins - he admitted it would be difficult.  I was able to explain why it was worth it!

John and Matty were with me on Wednesday.  With a change to my schedule, we were in the city in the morning, and I took them to Riccarton in the afternoon.

We all had some great opportunities to share Christ.

In the morning I had two great walk up opportunities.  And I had a great chat with a lady who was intrigued with the flip chart and wanted to go through it.  No real resistance, she tracked with me through to the end.  After explaining the cost, she said she wanted to accept the gift.  So I pointed her to the Bible and left the ball in her court to get in touch.

In the afternoon, I left John and Matty with their flip charts and walked down to the bus stops to see who would be open for a chat.  I stopped at a road crossing, and waited to cross.  Two girls came and stood behind me.  We crossed, once we got to the other side, I knew it would be a bit awkward, but I turned to offer them tracts.  One of them was so glad I did!  She had talked to me a year ago and wanted to talk again.  She remembered that I’d shared the law, and then I’d shared some good news.  I asked her what the good news was, and she couldn’t remember.  So I took the fresh opportunity to go over the law and the gospel again.  They even skipped a bus so the conversation could continue.

Meanwhile on his flip chart, Matty had a very long chat with a lesbian couple.  I then set up my flip chart and I had a great chat with a couple of guys who were Bhudist.  They came to grasp the gospel and were challenged to count the cost of accepting it. 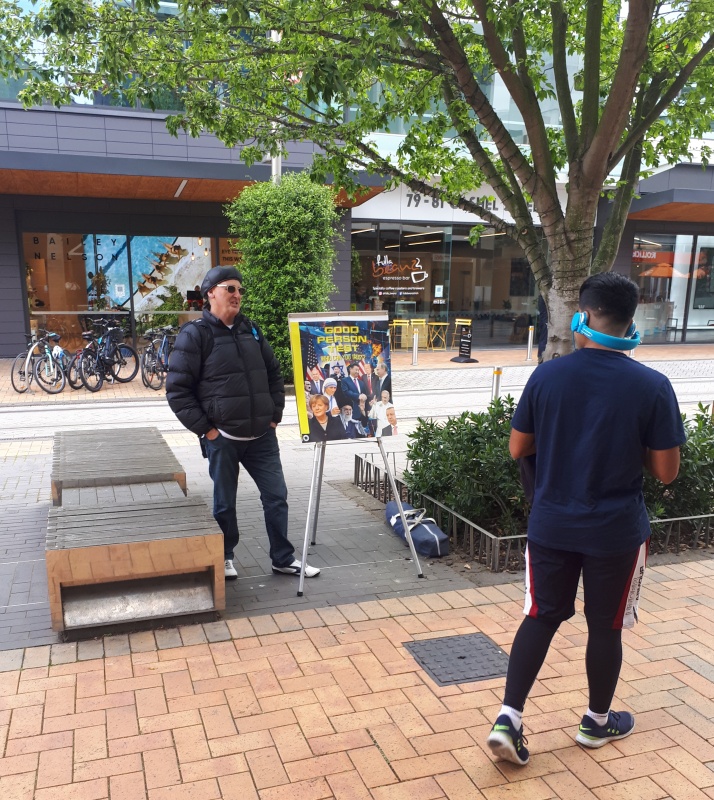 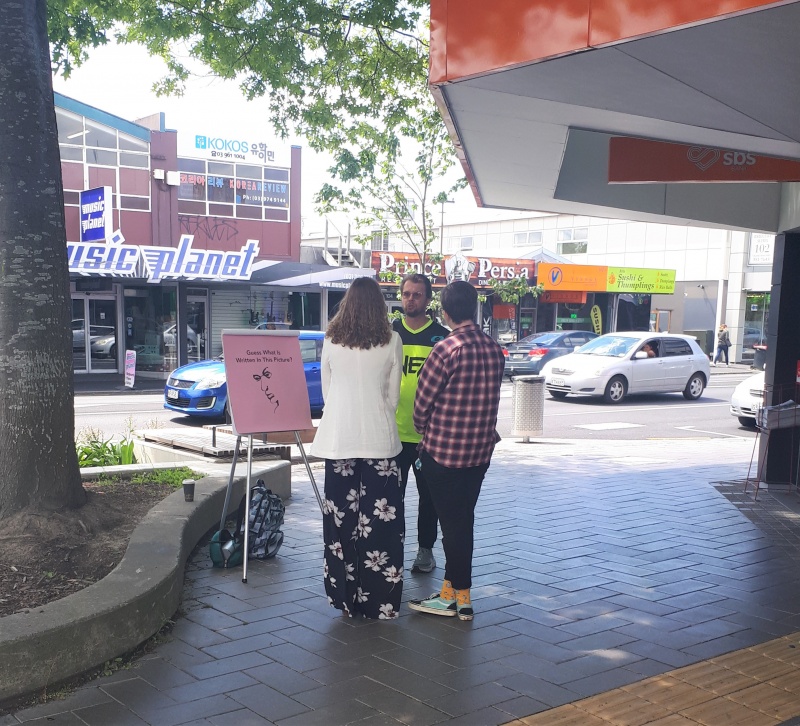