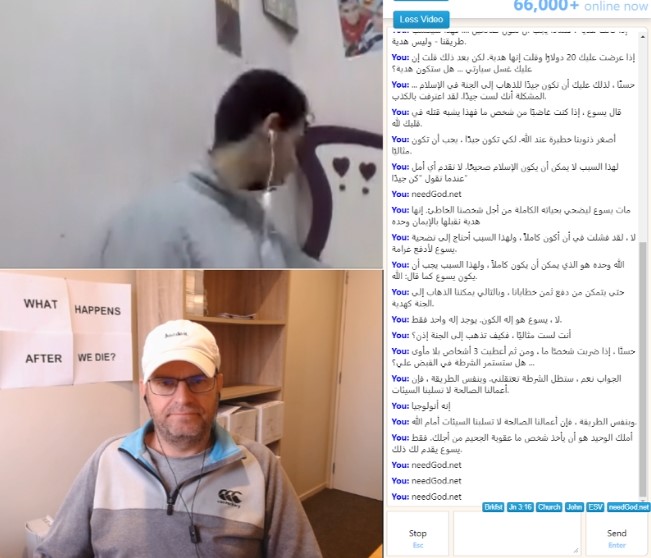 It was nice to have a day of rest on Monday.  Tuesday started with some online outreach before I headed to Riccarton again in the afternoon.

My very first chat of the day - the first thing said was from the other person, responding to my sign on the wall: “What happens after we die?”  It was a lovely first up chat with the guy (from Greece - I think my first time talking to someone from there), with a Catholic background, hearing the law and the gospel, coming to grasp it quickly, and responding that there was nothing stopping him from trusting in the sacrifice of Jesus.  I leave him in God’s hands, but I first pointed him to the Bible and a local church, and also needGod.net.

Next up was a chat who was trusting in his religiosity to save him - specifically baptism (he was also Catholic).  He also came to grasp the gospel and, with a frown, he admitted that it made sense.  I was working through checking questions when he decided to bail.  I understand that he has much to process - changing your thinking can be hard: impossible without God.

Next up, a little kid - always grieves me that one so young is in such a place.  But he needed the gospel too.  I could tell he was into Spider Man, due to a picture on his wall and because of something he said - so I swung the conversation to the greatest superhero: Jesus.  He heard the bad news, and the beginning of why Jesus is the greatest superhero before he disconnected.  May the law activate his sin and may he start to thirst for the truth of Jesus.  Lord, may he have more opportunities to hear your good news!

A guy from Finland.  He didn’t give the classic “be a good person” answer to why he was going to heaven.  It turns out he had a Christian background.  And yet, he wasn’t a Christian - he was only 10% sure he would be getting to heaven!  It was obvious he was really trusting his works to be saved - and he knew his works stunk.  I laboured with him on the gospel, but he wasn’t interested - sadly he seemed inoculated away from it.  In hindsight, I should have backed up and taken him through the law - something that was missed due to the unconventional start to the chat.

A guy with an Irish accent - and his girlfriend off picture.  They heard the law and the gospel - but seemed deeply resistant and quickly disconnected.

Last up was another kid having a lark online - he wasn’t expecting the serious conversation he got!  He heard the gospel, but it wasn’t sticking for him - I did my best to labour with him.  In the end I pointed him to needGod.net which he started looking at as I left.

It was great to get out on the streets - although overcast.  I ended up having a young man come over intrigued by my flip chart.  It turned into a conversation that went for over an hour!  He asked lots of good questions (sometimes twice).  He was really processing what was said.  He grasped the gospel quickly and then wrestled with the concept of repentance for a while - I helped him work through it.  In the end, I was confident he was clear.  We finished up talking about the cost (in this life) of the gift (for eternal life).  It was a great chat, quite tiring.  He didn’t really want to leave, he just wanted to ask questions - but they eventually ran dry and then he realised the time.  He knows how to get in touch with me.

Later I was letterbox dropping in Riccarton when my path crossed with an elderly gentlemen with a Muslim background.  We ended up having a lovely chat about the gospel and the differences between Islam and Christianity.  He took a tract - but put it in a letterbox for me.  So I gave him another one!  I pleaded with him to read it.

On Wednesday I decided to work online.  Eight solid gospel chats.  A guy who didn’t want God to exist, and didn’t like having his real motives for denying him exposed - he disconnected.  A great chat with a couple I couldn’t see - after initial resistance, they opened up and appreciated the chat in the end.  A chat with a musician who looked like a lady, but sounded like a man.  Deeply resistant to the logic of the reality of God, I didn’t even get to the law before they disconnected.

Next up I was connected with a couple of ladies.  One wanted to die.  All the other  could say was mean things to me.  No depravity vale on her!  I ignored the insults and persisted through the law and on to the gospel.  I can only hope in the reality that the gospel is the power of God for salvation.

A great chat with a young Muslim from Egypt.  Google Translate was my friend as Arabic was easier for him.  Yet sadly, he too was deeply resistant.  I persisted for a while before leaving him with needGod.net.

Next up a wonderful chat with a Hindu in India.  He came to grasp the gospel for the first time, and asked wonderful questions.  About twenty five minutes with him - who was left counting the cost.  I pointed him to the source, the Bible.

A great chat with some nominal Christians who came to grasp the gospel.

And the last chat was with a couple of teen guys who were being silly.  I ignored the silliness, and eventually they stopped.  I was able to share the law and the gospel with both.

Thank you to those who are praying for me and supporting me in this gospel work.  I can’t do this alone - again, thank you! :)