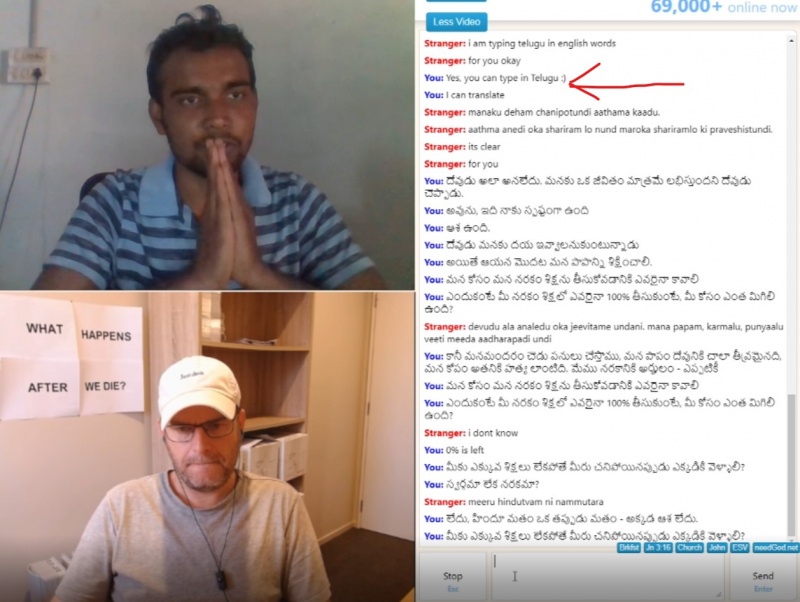 I don’t report this to boast - I have nothing to boast about!  But that is over 50 conversations online in a period of just over 2 days.  That’s 50 solid law and gospel conversations - not including all the short encounters with people who might get challenged with apologetics, or the law before they disconnect.  I’m now in the habit of praying before and after every conversation.  I often see a lot of resistance or indifference, so I pray that God’s word will be powerful and effective - even if I don’t see it.  That the law would bring conviction and that the conscience would be activated, that God would be glorified because of the conversation, and that he may save people, in his timing, by his grace alone, through the power of the gospel.  Sometimes people seem deeply impacted though, as they learn something they had never thought of before.  Some are very thankful, some say there is nothing stopping them from accepting the gift of Jesus, even after considering the cost.  They are pointed to avenues for follow up: the Bible, a local church, and needGod.net - where many conversations are had via Instagram direct message with the team there.

I guess with this report, I’ll try to touch on some of the highlights over the last two days.

I’m going to start with my time offline - in central Christchurch.  The weather wasn’t the best, rain.  But I decided to go in anyway.  I’m glad I did.  I had a unique opportunity to touch on the law and the gospel with 3 Pakistan cricket players who were walking through Cathedral Square.  I’ve been to Pakistan to watch cricket (in 2003) so I used that as a way to start a conversation with them.  I quickly swung the conversation from the natural to the spiritual - maybe too quickly.  One of them, Shaheen Afridi was instantly put off and disengaged.  The conversation petered out after that.  But one of them took a gospel tract from me.  Oh for the days when there were many tourists coming to Christchurch to hear the gospel!  In the meantime, I’ll do my best to take the opportunities that come.

Before this, I open air preached in speakers corner to the people passing by.  Not many people were there due to the weather - but there were enough.  No hecklers, so I was able to freely work through the law and the gospel without interruption.

Later, Binu joined me for tract distribution in Cashel Mall.

Ok, now for the highlights of my time online.

A lady who wanted to be a Christian, but was subtly self righteous - seemed to agree with the gospel, but bucked against the law and disconnected.  A Hindu guy who spoke Telugu, Hindi & English (pictured).  The concepts I was explaining were very foreign to his thinking, and he was very resistant.  I was lovingly honest with him, he couldn’t take it and disconnected.
I then had a string of four wonderful conversations.  The first was with a “Christian” lady who was trusting her good deeds to save her.  She was super appreciative of the conversation - having come to grasp the good news of grace.  The second was with a couple of girls, one of whom said that from today she is believing that Jesus died on the cross for her sins!  I then had a very effective three minute conversation with a lady who said her goodness would get her to heaven.  I took her through the law, and she responded with “you’re making me cry”.  I then explained the gospel, and she started to grasp it when she suddenly disconnected.  The last one was with a Christian guy, whom I encouraged to join us in sharing the gospel.

Of the 22 conversations on Thursday, the one I’ll mention is the one I had with a guy in Pakistan.  I think my first (online) conversation with someone from there.  He was surprisingly open, expressing that he had never heard such news before.  I pointed him to needGod.net.  Oh, this was interesting, I had a chat with a girl who had a Ukraine / English Bible - sadly she didn’t understand the gospel, I was able to labour with her for some time.

Oh, and another highlight from Thursday was a chat with an Asian looking girl, who sounded American, but was actually German.  She had all the right answers initially, but as the conversation progressed it became evident that she was actually looking at her good deeds to save her.  I confronted her to start trusting alone in Christ alone to save her.  It turns out she is a Baptist PK and leads worship.  She opened up about the pressure she feels to perform.  She came to tears as I encouraged her.  I challenged her to confront the hypocrisy in her environment - as hard as that will be.  I pleaded with her to reach out to some of the girls on the needGod.net team via Instagram.  It was a wonderful chat.

On Friday morning, a long chat with a guy who had a Hiindu / Bhuddist kind of belief, yet a Muslim father and a mother who had maybe become Christian?  He had a lot of apologetical questions to ask after coming to understand the gospel.  An interesting chat with two girls sitting in a car - I think from the USA.  One of them in particular became engrossed in the conversation.  They heard the law and the gospel.  Oh, and then a wonderful chat with two ladies who spoke spanish and a touch of English.  In a 12 minute conversation, with the assistance of translation tools on both ends, they came to hear the law and gospel!

On Friday afternoon, first up was a chat with a Muslim from Morocco via Arabic translation.  He was pretty resistant, but he connected the needGod.net team via Instagram.  A wonderful chat with a Catholic kid.  He was so appreciative of the conversation, declaring that he was going to skip, but he was so glad he didn’t.  “This is amazing”.  Later, another wonderful chat with a Catholic guy from Nigeria but living in the USA.  He had a lot of good Christian lingo, often going on about grace, but it was obvious that he was trusting in his works.  I was pretty stern with this guy as he tried to resist and fight, but he relented seeming to understand that I was doing it in love for him.  He has much to process.  Lord, save him!

Well, if anyone has made it this far, well done! :)  Thank you for praying for this gospel ministry.  May God receive all the glory alone.