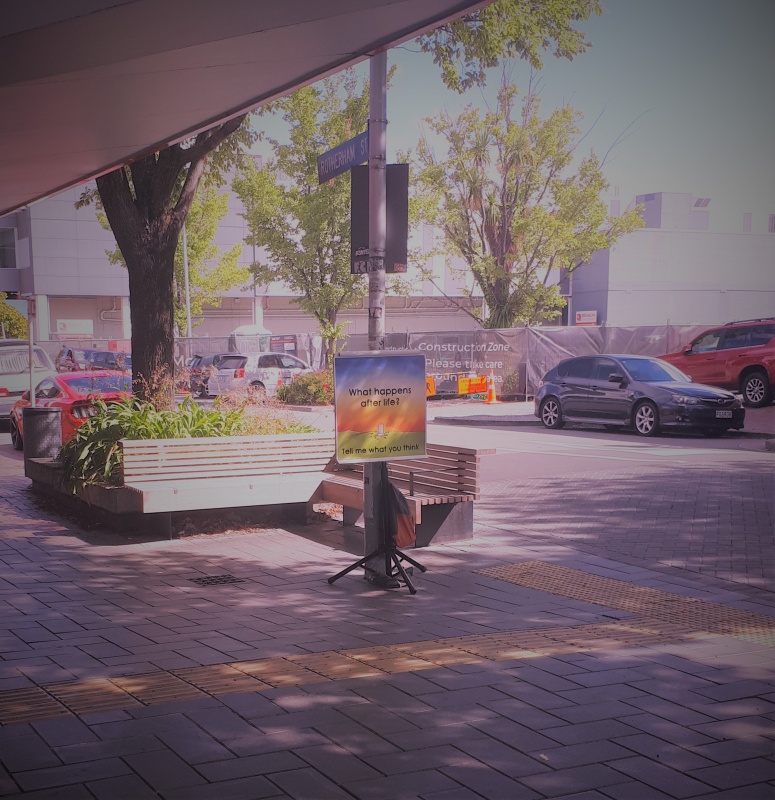 On Tuesday afternoon I was back in Riccarton as usual.  I had a fascinating conversation.  A young lady went past who smiled and stopped.  She said that I had talked to her last year sometime - she had been in a larger group (I didn’t remember her).  So, I checked to see if she understood the gospel by asking what she had to do to go to heaven.  I was encouraged when she said: “nothing, it’s because Jesus died on the cross for our sin”.  I clarified that we would have to accept the gift by trusting that Jesus had done that for us.  So I asked if she was trusting that Jesus had paid her hell fine.  She started giving weak excuses as to why she hadn’t.  Soon she started arguing that she would want to take the responsibility for her own actions.  I worked through two analogies to demonstrate the problems with her thinking - but she just doubled down.  I was confused, so I figuratively stepped back and decided to ask: “is there another reason why you are rejecting this?  Could it be that you’ve been deeply hurt by someone, and you don’t like the idea that that person could receive God’s mercy?”  To my surprise, she agreed.  Key lesson: if someone is fighting against logic, it's possible there is a deeper issue why, other than the logic.  It was great that the issue was on the table, so it could at least be addressed.  So, again, I tried to highlight the problems with her thinking.  I tried to reason with her about the serious nature of her sin - while trying not to minimise the sin that had been done to her (we talked about the fact that all sin is not the same).  We talked about the parable of the unforgiving servant (Matthew 18:21-35).  But, sadly, she was resistant.  We parted ways soon after.  She took a gospel tract.

Before and after being in Riccarton, I was online.

I talked to a guy who had been in a car wreck a month prior.  He was stuck at home with a broken leg.  He was thinking deeply about life and death, and we had a great chat.  He really appreciated it, as he came to understand the gospel.  I could tell he was wrestling with the cost (in this life) of the gift (of eternal life) - he didn’t give me any details, but I challenged him on this, pleading with him to respond in faith no matter the cost.

A chat with a girl who had a giant dog that kept walking in front of the camera!  She didn’t seem too interested, but she stayed to hear the gospel before she bailed on me.

On Wednesday I was given the opportunity to do some training.  It’s so encouraging getting an insight into all the Christians that are actively learning to share their faith online - it’s such a good environment to learn!  I spent an hour and a half with a guy from the USA - I answered his questions, and gave him feedback on the two gospel chats he had.  I was very encouraged.

I also had a number of my own chats.

I connected briefly with a guy from Saudi Arabia - his battery on his laptop was nearly gone, but he received a link to needGod.net before we disconnected - he said he would take a look.

My last chat was with a couple of girls who gained some much needed clarity on the gospel.  They were looking to prayer and baptism to save them :O.  It was a great chat - glory to God.