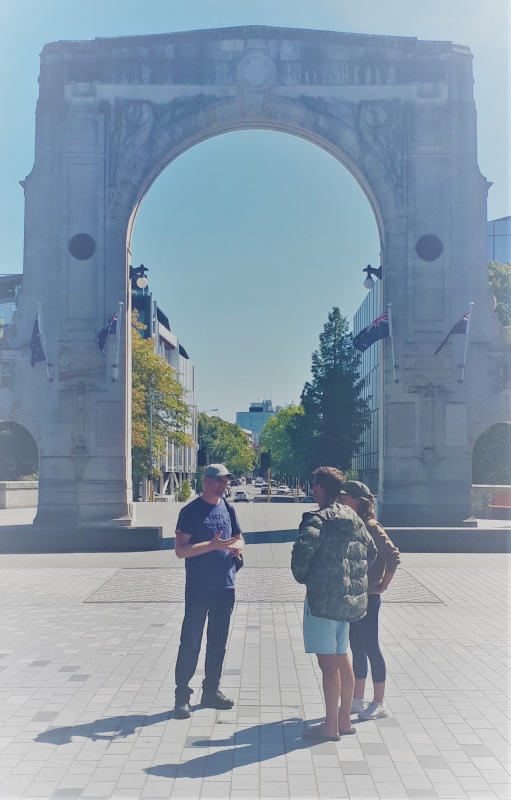 On Thursday and Friday, the Christchurch (NZ) team were in Eastgate, outside the hospital, and in the city for outreaches.

The gospel + abortion outreach attracted a team of twelve, including a couple of newbies.  Praise God, it was a peaceful outreach with multiple opportunities to engage people on the issue of abortion and with the gospel.

I’ve had some very difficult encounters so far this year, but during this outreach I had an extremely encouraging encounter.  A young guy and girl approached me.  He had a look on his face that suggested he knew me well, and he knew my name - I drew a blank.  It turns out he had talked to me a number of times before about the gospel: in Riccarton and in the city.  The girl said: “he talks about you all the time”.  It’s very encouraging to know I have a positive impact on people sometimes.  But sadly, he couldn’t remember the gospel - so, including the girl, we started going through it again.  Unfortunately, they were on the way to class and couldn’t stay to finish the chat properly.  But I gave them tracts each, and suggested they check out needGod.net on Tik Tok.  Oh, that they would forget me, and see Christ!  Lord, I leave them in your capable hands.  I hope I have another opportunity to interact with this young man - to be able to sit down and really chat with him.

At Eastgate, I had two very memorable conversations.

I was passing out tracts at one of the bus shelters, when a guy and a lady walked past.  I offered him a tract, he took it and stopped - she kept going.  He wanted to chat, and so we did.  He had grown up in an atheistic environment, but as he became a teenager, he rejected the notion that there is no God - “there must be a higher power”.  And yet, he had headed down the path of astrology, and positive thinking.  We talked simple apologetics for a while - he fought against it, but he said he loved talking about this stuff.  Eventually I was able to move on to the law and the gospel - which is the main thing.  He had to get going, because his friend had left him behind.  It was a great chat.

Later, on the other side of the road, a bus stopped, and an older lady hopped off and walked past.  I offered her a tract - she took it and wanted to know what it was.  We fell into a good chat from there.  She liked to talk, so the conversation went a bit slowly - but that was okay!  Eventually I was able to take her through the law and the gospel.  When she understood that Jesus died on the cross for our sin - her face changed to surprise and joy.  Some of her comments: “that makes so much sense”, “others need to hear about this”, “keep up the good work”.  Very encouraging!  She took a tract like she was receiving treasure.  I hope the seed is not plucked away, and I hope to hear from her again too.  I leave her in the hands of the Lord who saves.

There was open air preaching in Cathedral Square, and other outreach in Cashel Mall / the Bridge of Remembrance.

I had a fascinating chat with a young man who had studied philosophy at University.  He was very intense, and his intensity attracted another couple who joined the conversation for a while (and left with a tract).  Eventually I was becoming very tired (sugar low) and the conversation had to end, but he accepted my email address and a tract - he said he would contact me to continue the conversation.  I hope he does.

It’s great watching Andy so confidently and respectfully approaching people to talk to them about Christ - he’s currently at another level!  When I compare myself to him, I realise I’ve lost a lot of confidence of late.  I think due to some of the difficult conversations I’ve had of late, I’m shying away a bit.  A fear of man.  Yet I will continue to persist in sharing the gospel, prayerful of where I’m at.  Please continue to pray for the gospel work in Christchurch (including all those not directly connected to Operation 513 - there are so many diligently working to bring the gospel to those around them).

In addition to the street work, I was online for many hours over these two days.  Twenty four recordings on my desktop.  Glory to God alone that the gospel is being proclaimed!