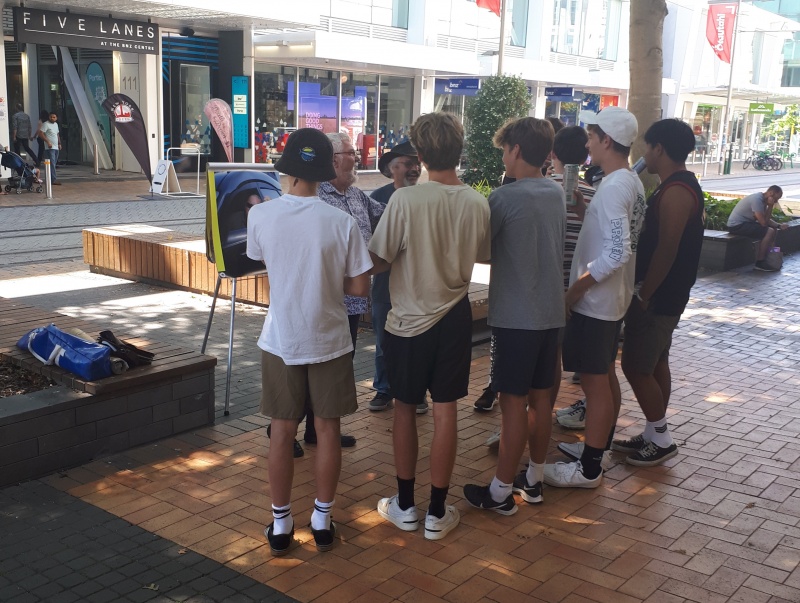 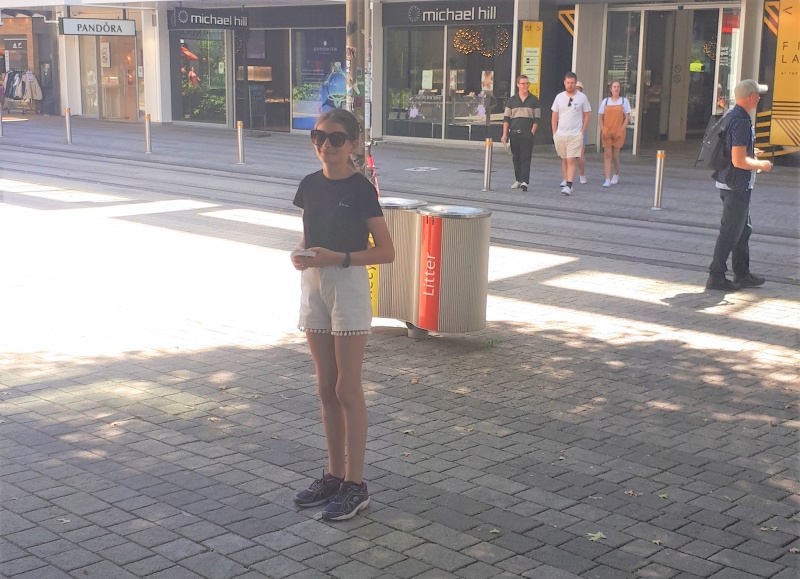 On Sunday it was very encouraging to have a team of twelve in Cashel Mall in the afternoon.  At least five churches were represented.  There was a good balance of experienced and newbies too - and it seemed to be a very productive time, from what I could see.

Tracts were going out, walk up conversations were occurring.  Flip charts were busy.

A group of about eight teen guys came down the mall, and Roger boldly engaged them, asking if they were good.  They all pushed one of their friends forward and said: “he is good”.  So Roger, standing in the middle of the foot path, with all these guys around him in a semicircle (blocking the footpath!) shared the law and gospel with all of them (pictured).  It was great to watch.

I had a number of interesting conversations.  A couple of Christians had great gospel answers and were super encouraged that we were out.  One in particular seemed super keen to join us in the future, and received contact details.

I had a great chat with a young couple who were Catholic.  Not surprisingly they said their good deeds would get them to heaven, but by the end of the conversation, they were articulating the gospel.  They didn’t seem too interested, sadly, yet they have heard the gospel.

Later in the afternoon, I was online with a team of at least twelve (as well).  We paired up for training feedback.  I was paired with Allie in the USA.  It was so wonderful watching her engaging a group of people with the gospel.  Her questions were excellent and appropriate for each stage of the conversation - I wrote many of them down so I could remember them for the future.  They all came to solidly grasp the gospel.  As they didn’t disconnect, Allie took them through her whole repertoire of analogies and checking questions until the connection froze.  Glory to God alone, but I’m so encouraged by all these passionate young people being raised up to share the gospel.  Lord protect them, and enable them to bring you glory by reaching many people with the gospel - for years to come!

On Saturday I was online with the team as well.  I had some easy chats - a girl recognised me from Tik Tok and was so excited to be talking to me.  She seemed to be a recent convert to Christianity.  But I also had some hard chats - I talked to a lesbian who it turned out had been raped, had the child, but the father killed the child when just four years old.  It was so tragic to hear, and I felt overwhelmed by the conversation - yet, with God’s help I persisted.  She couldn’t stand the thought that the guy that had done that to her could possibly be forgiven and go to heaven.  Without minimising the seriousness and wickedness of the crimes that had been committed against her - and emphasizing that perfect justice would be administered, I tried to relate to her that her (and my) sins were very serious in the light of the holiness of God, and that the only hope of forgiveness was Jesus.  I think that was one of the hardest chats I’ve ever had.

Again, thank you for praying for the team as we reach out with the gospel.