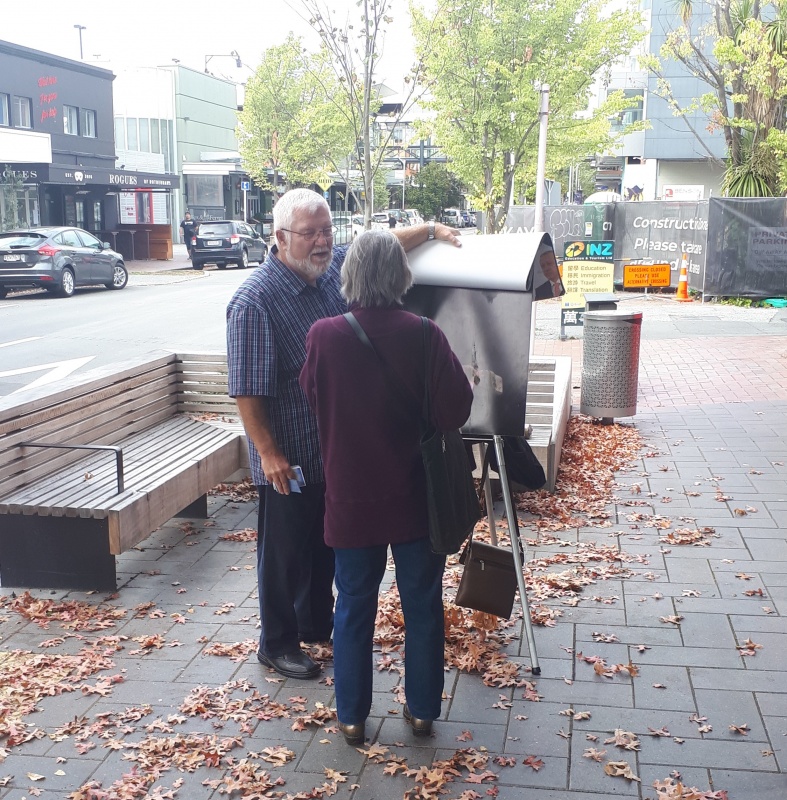 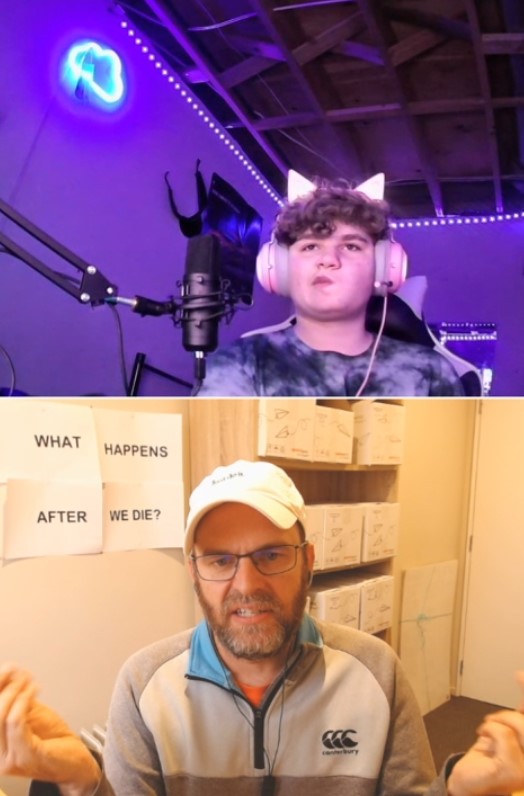 Autumn has arrived at our usual outreach spot in Riccarton.  On Tuesday morning Roger and I were there for a couple of hours with our flip charts.  But I often went for a walk down Riccarton Road and back - covering the bus stops - and getting into conversations that presented themselves.

A highlight chat was with a young couple who sat down to hear the gospel.  They heard the logic of how we know God exists, the law, and then the amazing gospel.  As we are close to Easter we talked about why Good Friday is good when we remember a man brutally murdered on a cross.  A couple of checking questions were required to nail down the understanding of the gospel before they moved on.

Later I crossed paths with a student from Christchurch Boys High - we had a brief conversation where he came to grasp the gospel.

At the end of the outreach I hurried home to join the online team for the afternoon.

My first conversation was with a guy from India who said he was a Muslim but had been to Christian church meetings while he had lived in the USA and had a fondness of Jesus (Isa).  Yet he didn’t understand the gospel - he thought “being good” would get him to heaven.  So I gently laboured with him till he grasped it.  It was a joy talking to him.  He said he would start reading the Bible.

Next up was a guy who was permanently joking about everything we talked about, and yet there was an intelligence in him, and he quickly came to grasp the gospel.  Yet he was easily distracted.  He showed me his pet Lizard which was cool.

A Catholic guy from Norway had an audible “ah ha” moment when he came to understand the gospel for the first time.  Sadly he didn’t stick around for me to work through any checking questions - I leave him in God's hands.

I then had a long thirty minute chat with a young lady who didn’t want God to exist because she didn’t like the idea that God could make the rules (be a “dictator”).  So I spent time labouring with her on how we know God exists anyway.  She slowed down and really started to process what I was saying.  She heard the law, and came to understand the gospel.  I was working through questions she had when she suddenly disconnected.  It happens - God knows why, and what’s going on in their heart.

Next up was a kid who was open to the conversation and slowly came to grasp the gospel.

The highlight conversation was with a young Christian man who assumed by my line of questioning that I was going to be an Atheist - he was a bit shocked when I turned out to be a Christian who would challenge him on his standing before God.  He had a reasonable grasp on the gospel, and yet was he really a Christian?  He knew a Christian should have assurance - his elders had been teaching on this.  And yet he didn’t.  Some gentle probing revealed that he didn’t think he deserved heaven - so that was why he had doubt.  To me it was clear he was looking to his works to be saved - even if it was just 10%.  I challenged him.  He seemed to really appreciate the conversation and said he would check out needGod.net on Tik Tok.  I especially pointed him to his elders.  This is too important to get wrong.

Two kids from Wales.  It was a tuff chat because one of them seemed to be grasping the gospel, but the other one just kept confusing the conversation.  I was tired, so I’m not sure I did as well as I could have, sadly.

Thursday I was online with the team as well.  A couple of highlight conversations.

The first was with a guy from the Dominican Republic who did believe in God but didn’t believe in God?!  He clarified by explaining that he believed God existed, but he didn’t like the hypocrites in churches.  From there we had a fairly standard conversation where he came to clearly articulate the gospel.  There seemed to be nothing stopping him from responding in faith.  So I pointed him to a Bible and a good church in his area (9 Marks had 3 listed).

The other was with a kid (pictured) who had a pretty fancy looking computer.  Using that as a conversation starter I was able to prove to him that God exists even in the face of some initial resistance.  He went silent, and then came out curious.  I was able to share the law and the gospel and check that he understood.  As always, I left him in God’s hands!