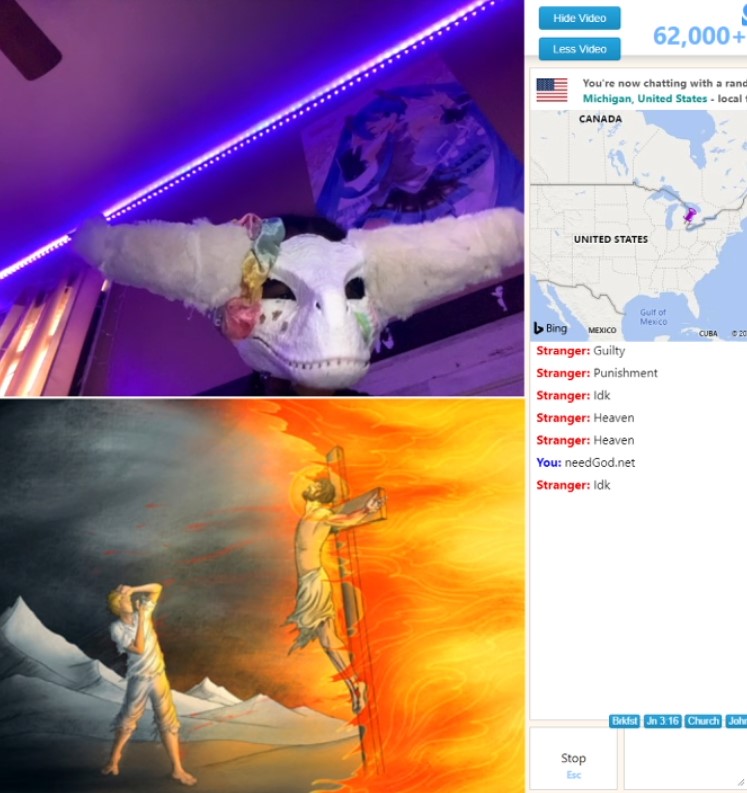 Thursday was a busy day of outreach - most of it online.

The first chat of the day was with a guy from India.  He said he was going to skip me, but the sign on my wall attracted him: “What happens after we die?”  He heard the gospel, and he seemed to be deeply challenged by the conversation.  Yet, sadly, he avoided answering my checking questions.

You get all sorts when you are out sharing the gospel!  I had an interesting chat with someone wearing a mask (pictured).  Their responses were limited to nods and shakes, and the occasional typed answer, but they seemed to follow along with the logic of the gospel presentation they were hearing.  They heard the gospel and I asked my first checking question which gets them to articulate the gospel back to me.  That was too much, and they stopped responding at this point.  Not much I could do, and so after pointing them to needGod.net, I disconnected.

I had a great chat with a Muslim guy from Algeria.  By the way he was dressed I can only assume he was up to no good - I left most of his video feed covered.  Yet we had a good conversation where he heard the gospel.

Two great (separate) conversations with guys who turned out to be likely false converts.  One before I headed off to the gospel + abortion outreach, and the other after.

Speaking of the gospel + abortion outrech.  It went really well!  A team of four, and no counter protesters.  We had many opportunities to engage with people about the gospel and with pro life apologetics.

The first was with an older couple.  He engaged in conversation.  I could tell he agreed that abortion was wrong, and yet he wanted to justify exceptions.  His argument was that if a child was going to have a terrible life, then it’s okay to kill it before it’s born.  I trotted out the toddler (and played the same argument back but inserted a two year old into the place of a preborn child).  I asked if it would be okay to kill a toddler in the same situation?  He could see the point, but persisted in his argument.  I listened and then said, “you know, they did that in Nazi Germany, the decided that the infirm were not worth of life, and killed them”.  He again saw the point, but this time his mouth was stopped.  He agreed.  I was then able to shift the discussion to how we know right from wrong: God, take him through the law, and share the gospel!  Praise God.  He was resistant, but he listened.  The gospel is the power of God to salvation - I leave him in God’s hands.

Soon after I had four teen guys approach and we had a wonderful apologetics engagement where I wouldn’t let them off the hook in regards to how we know God exists - which is the basis for morality.  Through the conversation the law and the gospel was touched on.  And they all took Life is Precious tracts.

Back online I had a wonderful chat with a guy from Italy.  He gently fought me on how we know God exists.  By the end of the conversation he opened up that he had grown up in a Christian family and he had “strayed a lot from the path of God”.  I could identify, and touched on my testimony and shared the gospel to try to give him hope!

Later I had yet another likely false convert!  He seemed to really appreciate the clarity of the gospel that he was missing.

The last chat I’ll mention from Thursday was one with someone from Mexico - Catholic background.  It was a text chat.  They were a bit slow to warm up to the conversation.  And they needed some clarity as the idea that salvation is a gift was foreign.  But they became engaged - I could tell because the questions were very good.  I leave them in God’s hands.

Good Friday!  Why is it called Good Friday when we remember a man brutally murdered on a cross?  I spent four hours online with the team answering that question for many people!

In response to my question “what do we have to do to go to heaven?” his response was: “don’t sin, and spread the *gossip* of Jesus”!  He didn’t realise what he had said - I had a little internal giggle.

And this one is very said.  I fell into a conversation with a young lady who, as I was going through the law, suddenly changed demeanor and said: “I would be guilty, but I like it, so I will go to hell” - then she disconnected.  :(

Thank you for the continued support - esp. prayer, as we continue to reach out with the hope of the gospel!