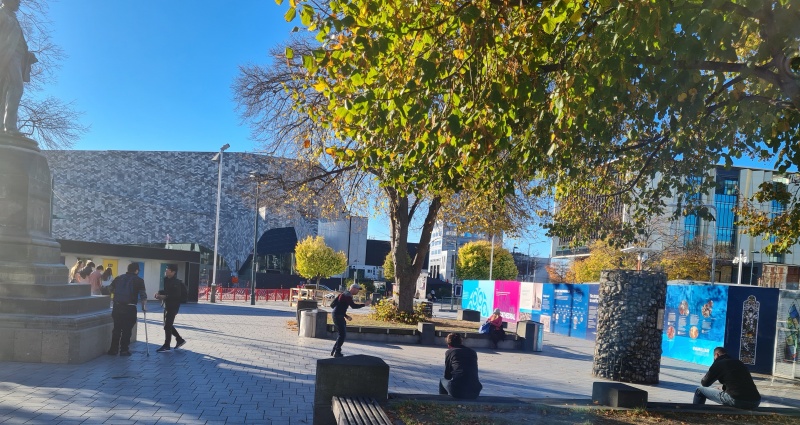 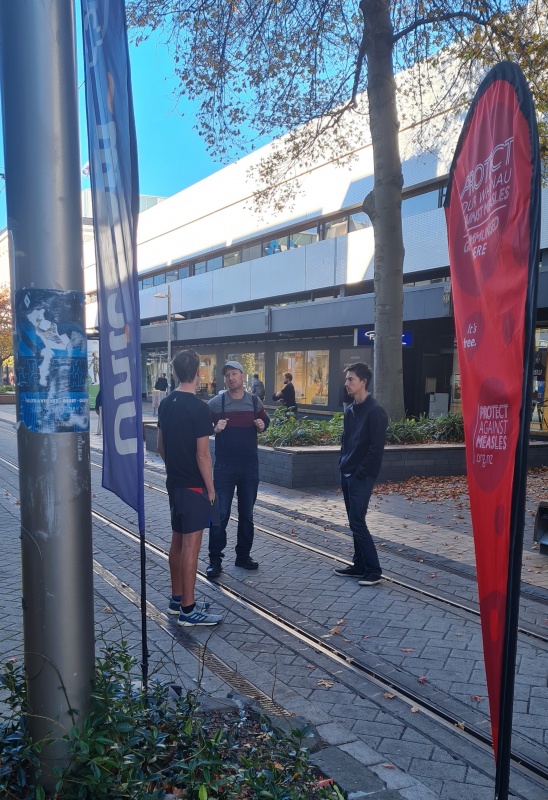 Sunday was freezing cold in the morning, but turned into a lovely sunny, warm, autumn day in Christchurch.  A team of five were on the streets in the afternoon.  It was a bit slow in Cashel Mall in spite of all the people out and about.  Andy and Toby had a long chat with a guy (pictured), but he really struggled to grasp the gospel for some reason.

We decided to move to Cathedral Square, and I’m glad we did.  I decided to preach in the open air.  I haven’t done that for a long time, and so at the very least I would be getting practice - even though there weren't many people around.  But it turned out that many people did flow past, and hear parts of the law and the gospel.  I preached with a passion.

After that we split up for ‘walk up’ and to give out tracts.  I got into a conversation with four teens - two guys and two girls.  It was fiery!  One of the guys went on an intense apologetics attack.  I calmly addressed his questions, and worked to get him to calm down - it worked.  It was a great exchange.  Multiple times I was able to touch on the gospel.  Three of the four of them took tracts.

I was buzzing after the preaching and that conversation.  Oh Lord, I love you!

I made it home in time to join the team for the last hour of the online outreach.  The last conversation was great and funny.  The kid thought he had to be good to get to heaven, heard the law and the gospel, and very quickly learned that the only reason we get to heaven is because Jesus died on the cross for his sins.  We talked about faith being the only thing we have to do to accept that gift, and we discussed biblical repentance.  I challenged him on what was stopping him from responding to the gospel - nothing.  So I pointed him to a church and the Bible.  It turns out he is already part of a church, and his Dad makes him read the Bible every day.  I suggested that he ask his Dad what he has to do to go to heaven and see if he gets the right answer.  To my surprise he shouted: “Dad!  Dad!  What do you have to do to go to heaven?”  He listened for a bit, and then told me: “he says you have to be nice”.  Then he turns and shouts: “you are wrong!” Then he turned to me and said: “I’ll tell him”.  Haha, it was so funny.  I told him how he and his Dad could get in touch with us if they want to follow up with questions.

At the very end of the stream, I got to listen into the end of one of Grace’s conversations.  I listened to him respond to the fireman analogy - it was so powerful, and then Grace swung back to make sure he was still grasping the gospel, and his answer was so clear and just couldn’t help rejoicing!  The gospel is so amazing, and so wonderful.  God you are so good!

I was also online on Saturday.  The highlight conversation was a long one with a guy from Norway.  As soon as he realised what I was doing, he said that he had been to Bible college - but he had rejected the Bible.  I spent thirty minutes reasoning with him - but it was like he was blind, I just couldn’t get through (as far as I could tell) - so sad.  But he heard the gospel, and I left him in God’s hands.

Thank you for your prayer support of the Operation 513 ministry - it’s so vital, we can’t do this in our own strength!