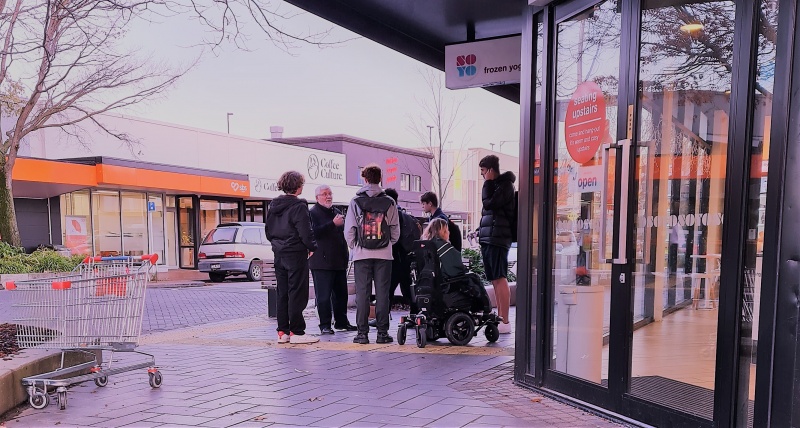 On Tuesday, late afternoon / early evening, I was in Riccarton with Roger for a couple of hours of street outreach.  We were both flat out in conversations for the first hour and a half - praise God.

My first chat was with a guy who was interested in my question: “What happens after you die?”, but said he hadn’t come to a conclusion yet.  He said he had looked into Bahai and Christianity.  I asked him what he thought a Christian had to do to get to heaven.  Answer: “be as good as you can be”.  Going from there, I explained the gospel.  He seemed intrigued.  He opened up a bit, and seemed to appreciate the chat.  He left with a tract.

During the outreach, I interacted with three “regulars”.  One of them couldn’t believe one of the others was still living on the street, in spite of all the recent rain.  We had a long chat, where I played that thinking back on him in not understanding why he was willingly rejecting the gospel.  He made it clear he would rather go to hell, than turn from his sin (he understood that salvation was a gift, but he knew he wouldn’t be able to stay in his sin, which he loves).

An old workmate passed by!  We had a good catch up.  I was able to swing the conversation to the “Ontological argument” - as he put it.  Which we discussed for a few minutes, but by this point he had to go.  He accepted a tract.

To finish off, I had an epic chat with a young man who said, “I think about it all the time” - when I asked him what he thinks happens after he dies.  I could tell he couldn’t stay long, so I quickly took him though the law and the gospel.  He seemed impressed, and wanted to stay to chat, but couldn’t.  He left with a tract, and one for the person who was waiting for him.

Roger was having a wonderful time too, at one stage he had a long chat with a large group of kids - pictured.

I was online, with the team,  for four hours each day: Tuesday and Wednesday for a total of twenty four conversations.

Two highlight chats from Tuesday.  The first was an apologetics battle, which was enjoyable for me - within that discussion, the gospel was heard, although the guy seemed closed to it.

The second was a long chat (43 mins) with a guy from South Dakota (first time I’ve reached someone in that state).  The guy was talking about levels of heaven, and my initial thought was that he was Mormon.  When I asked he responded by saying he was Lutheran.  But he didn’t know the gospel, and clearly stated that his good deeds would get him to heaven.  I laboured on the law & the gospel and showing him that his only hope was Jesus, and not his own righteousness.  I’m confident that he came to understand this.  But there was zero spark to the wonder of God’s grace.  Finally he asked me about Freemasonry.  It turns out his Dad is high up in that hierarchy.  Please pray for Jordan.

From Wednesday, the highlight was a thirty minute conversation with a young man from India.  The idea of someone else taking his hell punishment for him was so foreign to his understanding of good deeds for salvation, it took a lot of labouring, and patient explaining before understanding of the gospel finally started to take hold.  Yet once it did, it seemed to have a deep impact: (in an Indian accent) “Sir, you have totally changed my mind”.  And yet, it was clear from the checking questions that he was still struggling to grasp this new concept of grace, trying to mix it with works.  I continued to labour until his video froze up.  We were still able to communicate via text, and, apart from the Bible and a local church, I pointed him to an easy way to get in touch and continue the conversation if he wanted to.  Praise God.

The final conversation of the day was relatively short (11 mins) the kid grew a smile as understanding of the gospel sunk in, at the end of the conversation he said, “thanks, I really needed this”.