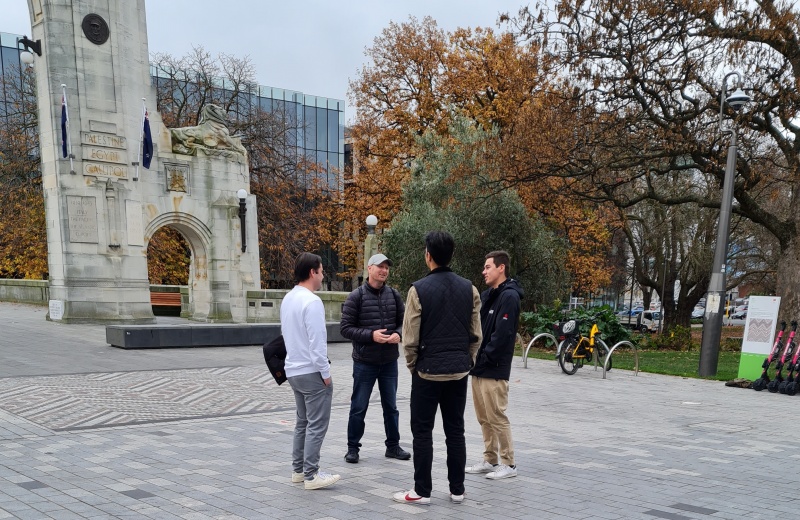 My brain is overloaded with interesting things to write about the last two days of outreach, I hope I’ll be able to get to them all and describe them well.  Eight hours of outreach per day, made up of online work, as well as a first venture to the local university campus on Thursday and our usual city outreach on Friday.

Firstly, an amazing conversation occurred online.  Once the rest of the team had joined me, I was first up for the live stream.  I got into a conversation with a construction worker from Utah, USA.  I was able to explain how we know God exists, and I had taken him through the law.  I was just about to move into the good news when he disconnected!  I was really disappointed to have him leave with just the bad news.  Yet God is sovereign.  While on live stream, I prayed that he would have an opportunity to hear the gospel, and then went to start my next conversation.

At that moment, I glanced at the rest of the team, and I noticed that Ryan had a re-connect.  This doesn’t happen very often, so I looked deeper.  It was a reconnect with someone I had talked with before, and then I was stunned.  It said I had talked to this person 38 seconds ago.  The guy I had been talking to had disconnected from me, and had immediately connected with Ryan.  I told Ryan to unmute, which he did, and the live stream was able to listen to Ryan continue the conversation with him!  God answered my prayer!  GOD IS SOVEREIGN!  Sadly, the guy didn’t stay with Ryan for long, but he was able to start hearing the gospel, and it was super encouraging for me.  If you would like to watch this unique encounter, you can watch it here.  But be warned the guy I was talking to uses some bad language.

After I had finished my stint of live streaming, I headed to Canterbury University to join Andy and a student, Ezra, for a few hours of outreach there.  As this is the first time I’ve done outreach there, and wanting to be respectful of etiquette, I put my tracts in my back pocket.  I approached people respectfully, was very open about who I was and what I was doing, and gave them lots of opportunity to get out of the conversation if they wanted to (many of whom took that opportunity).  But in spite of this, I had a wonderful time discussing the gospel with people.

The first guy was a fourth year civil engineering student - I didn’t get past the discussion of how we know God exists.  He fought against it.  He finished his lunch and said he had to get back to his studies.

I then approached two guys who came from Ethiopia.  One was a Christian and was keen for me to share the gospel with his friend, which I did.  It was a great chat.

After a few false starts, I then fell into the highlight conversation of the outreach.  Three students walked past and one of them said something interesting, so I commented, this caused them to come over to me and we naturally fell into a gospel conversation.  It started with me asking if they ever think about what happens after they die.  To my amazement, one of them said, “yes, all the time, we were just talking about it”.  So I asked what they thought.  “Well, there are three options: 1) nothing, 2) reincarnation, 3) heaven or hell”.  It turned into a very long chat.  Two of their friends joined in early on too.  It was me against five.  They asked good, challenging questions.  I even touched on some presuppositional apologetics, giving one of the best summaries of it I’ve ever heard come from my mouth (where did that come from!?).  The gospel was clearly explained, and checking questions were employed.  The two that joined left (the girl was deeply resistant to the gospel), so I was back down to the original three.  They lingered, and I was able to continue exhorting them to respond to the gospel.  I was exhausted after that chat - very draining, but so wonderful.  Thank you Lord for the opportunity to represent you to them.

I woke up on Friday feeling very tired from the previous day's outreach.  But God used that.  I was online in the morning (with Andy).  I connected with an older guy called Jimmy from Ireland.  He was deeply resistant: “There is nothing after you die”.  I was too tired to engage in my usual way, and I got the impression this guy was lonely.  I let him talk and just listened.  From time to time he would slow down and leave a gap for me to interact, and, as appropriate I would gently respond to what he was saying, and do my best to beeline for the gospel (he heard it multiple times), before he would re-engage and talk while I listened.  As the conversation progressed, I watched something interesting happen: he started to soften.  We ended up talking for thirty five minutes, and he seemed really grateful for it.  He mentioned that he used Facebook a few times, so I asked if he would check out needGod.net on Facebook.  He said he would.  This conversation was a real reminder to treat people like people when sharing the gospel.  We are not there to just convince people intellectually (although we do want to reason with them).  And as great as methods and scripts are, and as much as we want to avoid rabbit trails and stick to sharing the gospel - there is a time to just go with the flow.  God is in control.

The outreach in the city went really well.  I ended up sharing the gospel with a guy who turned out to be a kid I taught in Sunday school years ago!  I only recognised him (just) when he told me his name, which was unique.

I’m out of time to write any more, so I’ll leave it at that.  Thank you so much for your support of this ministry.  All glory to God alone.