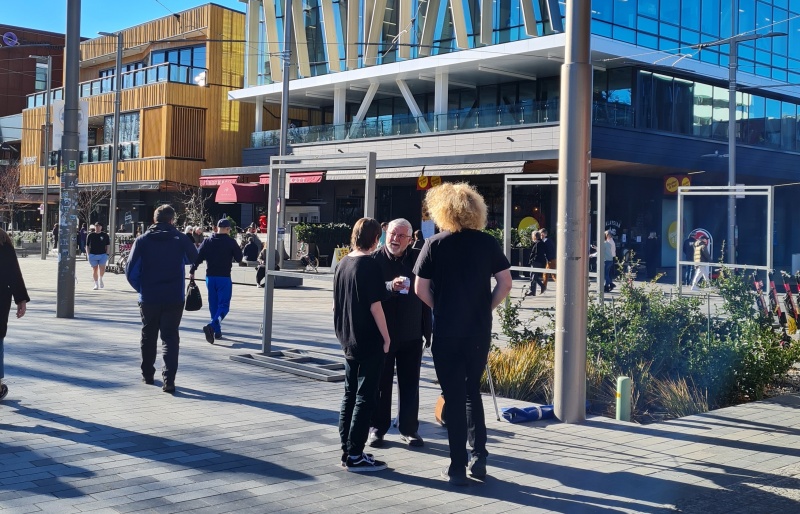 I’ve never felt more content.  I have no ambition, except the glory of God.

I’d be happy to go to hell.  Because I know that God would receive glory by justly punishing me for my wicked sins.  But I know I’m not going to hell, because of God’s glorious mercy, Jesus, in paying my hell fine in full upon the cross.

I’m truly happy, being in the background.  Anonymous.  Telling people about who is important: Jesus.  Until I die.

Apparently there are a few of you who actually read these reports.  I’ve had queries on why I’ve stopped writing them.  I’m allowed three hours a week to write these reports.  And because they gave me a break from constantly talking to people I made the most of this writing time for my own selfish purpose: introvert time.  So, now, there are two years worth of ‘three reports per week’ gathering virtual dust.  But I’ve found a new outlet for my introvert time: Instagram and TikTok direct messages.  Most of my weekly time now is spent sharing the gospel that way.  Long may it last, but just whatever brings God the most glory.  So that is the only reason I’ve stopped writing these reports.  The team is as busy as ever.

We are still doing street outreach at regular times through the week.  We are still having one to one gospel conversations with people online.  And training is still occurring.  All to the glory of God alone.

One recent street conversation:  I was standing in the cold trying to get a conversation started, but no one was taking the bait.  I was so cold, I was forced to cross the street to stand in the sun for a while!  I was passing out tracts when a young Chinese couple went past.  I said: “it comes with a question if you have a minute”.  They stopped, and we fell into a gospel conversation.  Part way through the conversation the guy mentioned that he had a Bible on his phone.  I was curious as to why.  He said, “Well, firstly, it was free”.  But then he said that they were recently in a hotel down in Invercargill and they had found a Gideon’s Bible and had read a few pages.  This had obviously interested him enough to want to read more.  Praise God for that!  But the couple didn’t yet understand the gospel.  The idea of it being a gift was so foreign to their thinking, that I had to labour with them.  I could see that the guy still had questions, but I could see a light of understanding come into the eye’s and face of the lady.  She was very thankful.  What a joy this conversation was!  They took the tract, and they have a Bible.  Oh that God would save them and knit them into His church, for his glory alone!

But the most stunning recent conversation was on Saturday.  Online, part of the weekly training outreach, where we all pair up to listen to each other's gospel conversations and provide feedback.  I was paired with Allie, from the USA.  She went first, and was instantly (no skips!) into a conversation with a young man from Azerbaijan.  I was stunned.  Allie is a way better evangelist than I am.  She was patient in listening carefully.  She knew the right thing to say at the right time.  She even anticipated questions and answered them before they were asked.  Later he would ask the question and then realise that he already knew the answer!  You could tell he was understanding the gospel clearly in the questions that he asked.  It was such a joy to watch!  There were four, count them, four things I learnt from listening to Allie to help me bring gospel clarity and focus in my future conversations.  Sadly, after about thirty minutes of conversation, the young man became resistant and angry.  And then Allie knew the time was right to back away and end the conversation - which ended on good terms and with him receiving a follow up link to needGod.net.  When it was my turn to share the gospel, and have Allie listen for feedback, I was a blubbering mess, with performance anxiety!  After three starts and multiple skips, I finally connected with a young man from the USA who responded with “I think about it all the time” in response to my question “what do you think happens after you die?”.  I couldn’t have made the conversation harder for myself, mucking up over and over.  And yet, in spite of that, the guy started professing faith.  It seemed too easy, so I spent some time making sure he was counting the cost, and that he understood repentance.  But, although there was no outward spark that I could see, he held to his profession, and so was given a way of getting in touch, and pointed to a Bible and a local church. He is in God’s hands.  But I just praise God that He condescends to use us, as we are, in spite of our weakness, muck ups, and theological mistakes - for His glory.  Long may we strive to improve - for His glory!

So, anyway, there won’t be as many reports from me from now on.  Not saying never, just whatever brings God the most glory.

Please keep praying for the team and the work we are doing!  Pray for labourers for the ripe harvest fields.  All glory to God alone.