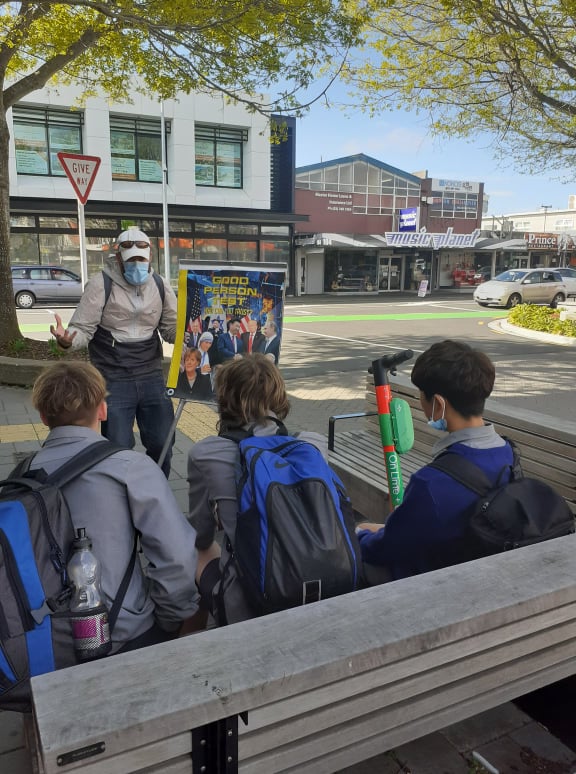 Well, it’s been nearly 3 months since my last report.  I haven’t missed writing them!  It’s been nice being on the streets and not having to think of taking pictures.  And I’ve really enjoyed the extra time responding to direct messages online.

But, I’ve decided to write a quick report just so y'all know we are still busy sharing the gospel in Christchurch and online!  And I actually have a few things worth mentioning.  We really, really appreciate all the prayer and support.

So, since I last wrote we have been in a Covid lockdown.  Sad to have Delta land on these shores.  The time wasn’t wasted as I just focused all my energy into online outreach.  Yet after about 4 weeks, the lockdown was eased to the point where street work was possible again.

My first outreach back was a Sunday afternoon.  I came prepared with my face mask, and flip chart, giving people the option of approaching me rather than the other way round.  I wondered if anyone would.  Most people were wearing masks, and to my surprise the outreach was quite fruitful.  I can’t remember the specifics now, but I was encouraged!

I continued the street work.  People have become less concerned about face masks - but I still wear one.

There are quite a few newbies on the street team.  This has given a lot of opportunities for training - which has been great!

A couple of Friday’s ago, it was school holidays, and there were swarms of people out on a warm, sunny spring day.  I was pretty non stop taking people through the flip chart with lots of newbies to observe and be encouraged.

Plenty of gospel tracts are going out too.

Last Friday there weren't as many people out, in spite of the good weather.  I decided to switch spots and low and behold the rest of the outreach became eventful.  I had three follow up opportunities.  In one of them, the guy could only remember the ‘straw’ part of the ‘trust’ analogy.  He was resistant, and yet he really wanted to chat.  And he had a friend with him who I haven’t talked to before - so he got to hear the gospel.

Amazingly, the guy started talking about healing.  He said that his ankle had been ‘smashed’, and that his Dad had prayed for it’s healing - and it was!  But do you know what he said?  “It was a coincidence - it wasn’t God”.  It just goes to show that John 12:37 (ESV) is true:

Though he had done so many signs before them, they still did not believe in him,

For I am not ashamed of the gospel, for it is the power of God for salvation to everyone who believes, to the Jew first and also to the Greek.

So I continued to labour with these young men toward their understanding of the gospel, many checks were employed.
A couple of weeks ago, in Riccarton, I had shared the gospel with 3 guys from a local high school.  I had to labour with them to get them to stop thinking their good deeds would get them to heaven, and realise that Jesus was their only hope.  It was a great chat.

Well, yesterday, I was in Riccarton with Roger.  It was windy, so I didn’t bring my flip chart.  I had some great walk up opportunities.  Roger did bring his flip, and every time I came back down to where he was, he had a different group of high school kids talking with him!  The first time was 3 guys, the next there were about another 6 guys intently listening to him.

Eventually we were able to greet each other, before another high school kid wanted to know what the flip chat was about.  I talked with him, while Roger had a chat with a lady pushing a pram (Roger gets away with talking to people who won’t stop with me!  I reckon it’s his Santa look - haha - love ya Roger!).

But after the kid I was talking to left with a tract, 2 of the guys I had talked to a few weeks back came past again - they had a new friend with them (pictured).

I checked to see if they could remember the gospel - they got it right!  I was super encouraged to hear one of them had been reading a Bible, and they had checked out needGod.net on Tik Tok.  One of them made a comment about one of the videos he watched - he was impressed.

Interestingly, their new friend was a Christian.  I checked if he understood the gospel.  Sadly, he was clueless.  He said he would go to heaven because he goes to church.  He insisted he was ‘a  good person’ multiple times.  His mates wanted him to go through the flip chart, and so he agreed.  But he was switched off, and his two mates had to prompt him with the answers.

Eventually he said, “I know Jesus died on the cross” - but it was an afterthought, and he wasn’t making any connections with its significance.  Eventually he said he had ‘prayed the prayer’ with his Mum.  It pained me to hear him say it.

He had to leave, but he took a tract.  And I had an opportunity to encourage the other two kids, who seem to be grasping the gospel, in relation to getting involved with a church.  I told them how they could get in touch, and left the ball in their court.  I hope to see them again!

Speaking of church, it’s been encouraging seeing some of those we are talking with online getting involved with local churches (see images of chat snippets).  Of course, most are rejecting the gospel, but seeing the few responding is so encouraging.  And no matter what, God is glorified: in his justice being displayed, in his mercy granted, and in the obedience of those who GO with the good news.

So, I think that covers everything I wanted to touch on.  If you made it this far, well done!  Come and join one of the teams on the streets or online - we would love to serve you :D 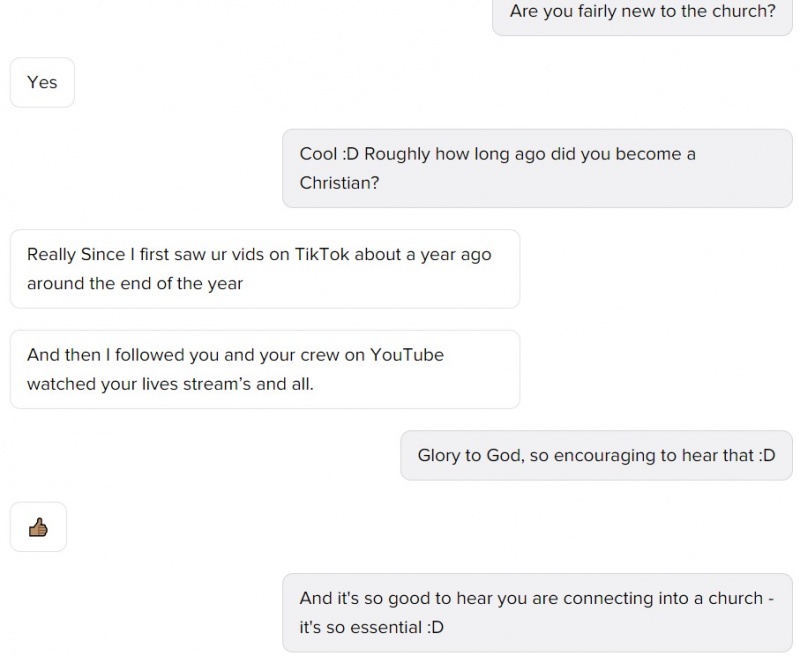