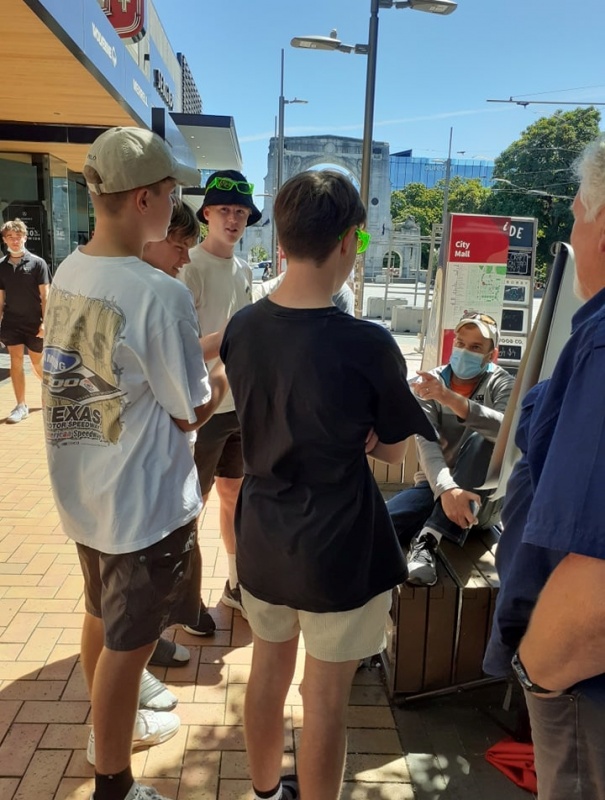 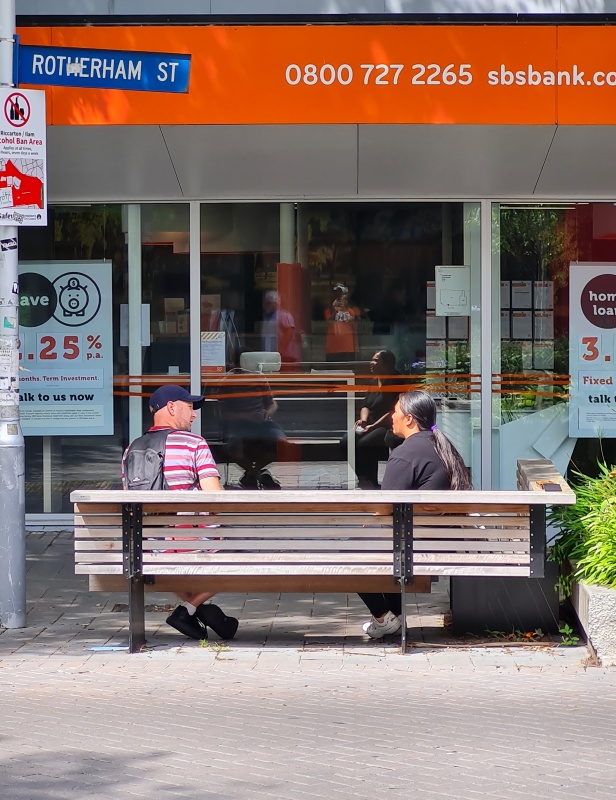 Often, when doing street evangelism, you face a lot of rejection.  People not stopping, dirty looks, refused tracts.  And yet, God allows many opportunities for gospel ministry.

But sometimes, an outreach will be ‘off the charts’.  You have multiple people stopping at the same time(!) and wanting to talk to you, thoughtful looks, and even those you don’t expect receive a tract.

Well, today’s outreach was ‘off the charts’.  It was a blur of activity to the point where my memory is struggling to put it all together.  I’ll do my best!

I arrived at the usual spot (bridge of remembrance), I got there before Roger, and so I decided to hand out a few tracts in the meantime.  The very first one was to a young lad - a fish that had been pre caught, gutted and filleted and just dropped on my lap!  He was so open.  He had been thinking about what happens after life, he already believed in God (had non practising Catholic parents) but just needed to understand the gospel.  The conversation followed the script perfectly.  He started professing faith, and so I got him to consider the cost and then pointed him to the Bible and a local church.  He left with a tract and a way to get in touch.  What a start.

By this stage Roger had arrived and we went to prayer, thanking God for the opportunity already given, and to cry out for help in what is ‘mission impossible’ otherwise.  God certainly answered that prayer!

By this stage, Steve (OAC) had arrived and was keen to check out the new flip chart…

By the way, we have designed a new 6 page large flip chart that incorporates all the concepts from the 19 page mini flip chart plus more.  When the first printing arrived, I was so excited about it that I posted about it on my personal Facebook page.  The post generated enough interest that I decided to write about each page.  You can read that series of posts here: Part 1, Part 2, Part 3, Part 4, Part 5, Part 6, Part 7

So, anyway, I set up the flip chart, intending to demonstrate it to Steve when a young man going past was attracted by the front page, so Steve got to watch it in action!  Interestingly, one of our regulars turned up, and so Steve ended up getting into a chat with him, while I shared the gospel with the young man.

He claimed he was an unemotional thinker and so we engaged purely on logical grounds.  He followed along with the logic, but when he could see the implications, he rejected it.  I challenged him to fault the logic - he couldn’t at this stage, so I pleaded with him to think about it, and if he saw any flaws, to let me know - because I want the truth as well.  We parted ways with a handshake, and he left with a tract and a way to get in touch.

It’s at this point it gets blurry.  The flip chart was popular today, people were attracted by the front page.  At one point I had 3 separate groups of people stopping to engage!  I wasn’t able to hold the attention of them all, sadly.  Oh, for more Christians to join me! :D

I ended up getting into a great conversation with 3 young passionate Catholics.  Sadly they disengaged - but seeds were sown.

The last conversation was with 5 young guys (I think they said they went to Christ’s College).  There was some banter at the start, but soon they started engaging seriously.  They were all at different places in where they were at with what we were talking about - and yet, I was able to hold the attention of all of them (thank you Father).  One of them sobered.  One of them was asking brilliant questions that the flip chart was anticipating.  I was able to take them through every page of the flip chart, and use every segment of the last page (but one).  And this time, Steve was able to see the whole presentation!

As that conversation wrapped up, I pulled out my phone and it was exactly 3:30pm!  Wrap up time.  I was on cloud nine.  Clicking my heels, so excited by the wonderful opportunities to bring glory to God and tell of him to others.  Thank you Father for condescending to use us in your work!  We finished up with prayer of thanks and praise.

I have the best job in the world.  Thank you to those that are supporting this ministry - esp. In prayer.  Thank you for enabling me to do this.  Please pray that this ministry would continue to be a blessing and encouragement to the larger church, and that souls would be saved and knitted into the church - to the glory of God alone!

By the way, Andy & I have both been able to have some summer rest - which has been great!  We are both back from Holiday now.  Andy is pictured in the Tuesday outreach in Riccarton.

We both continue to mine the gold seam that is online evangelism.  I’ve selected a few of the recent snapshots from conversations we’ve been having.  I esp. like the one where they said they have started going to a Presbyterian church, even though they’d prefer to be going to a Baptist one! ;)  So encouraging that they understand the importance of being part of a local church! 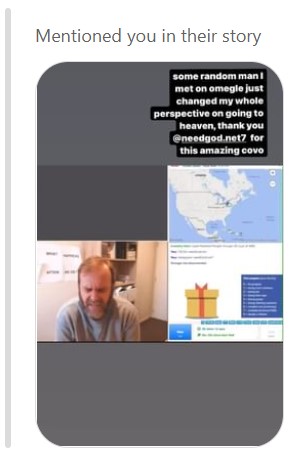 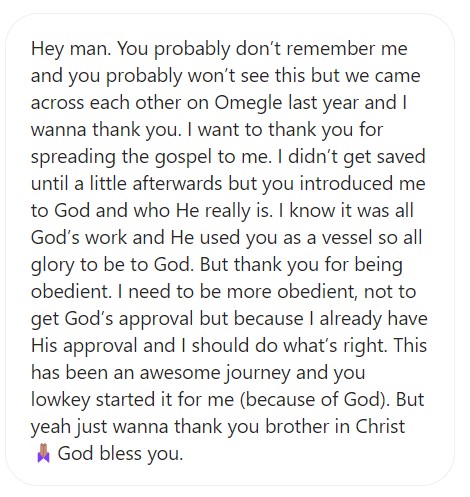 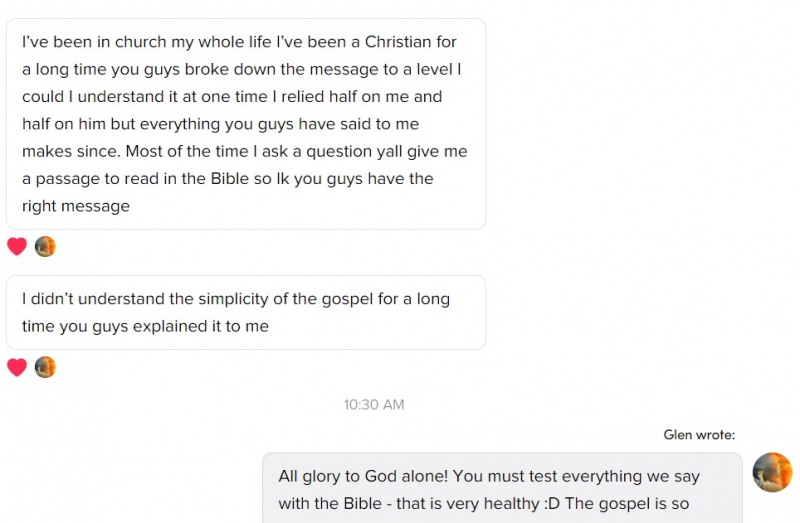 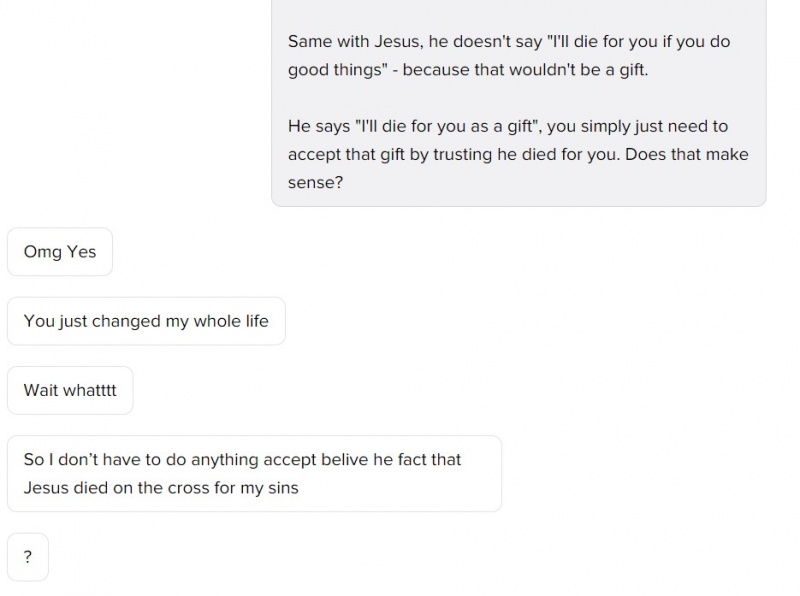 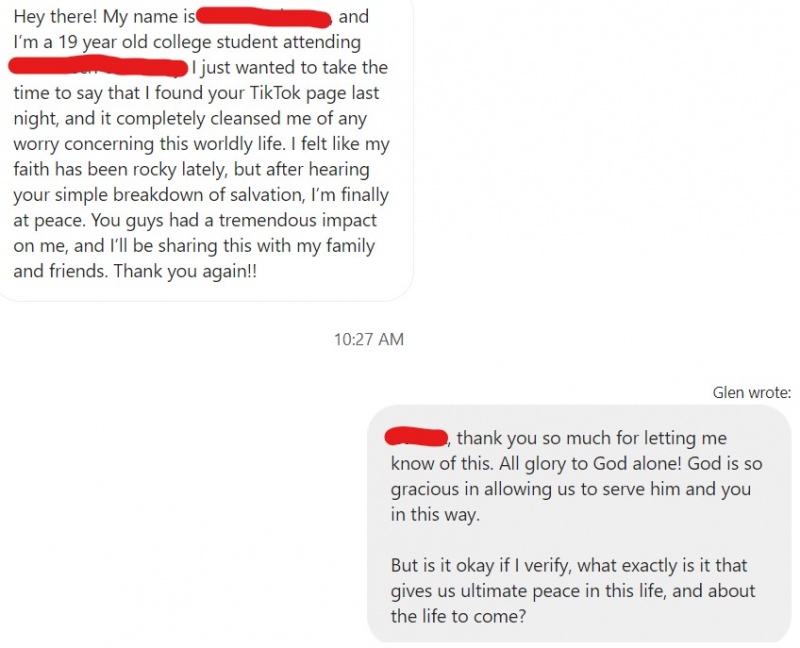 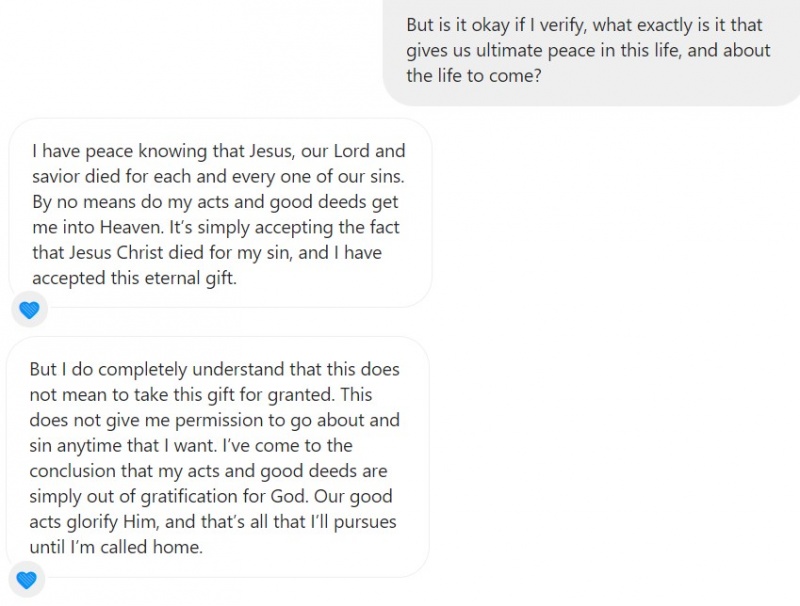 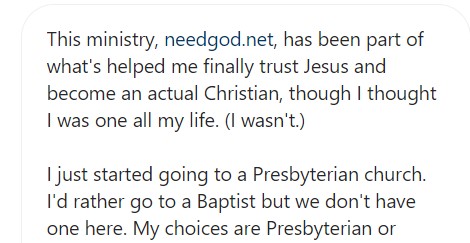 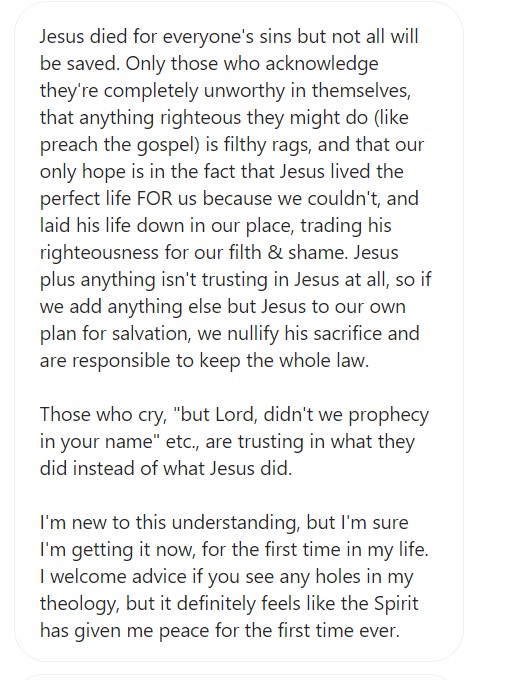 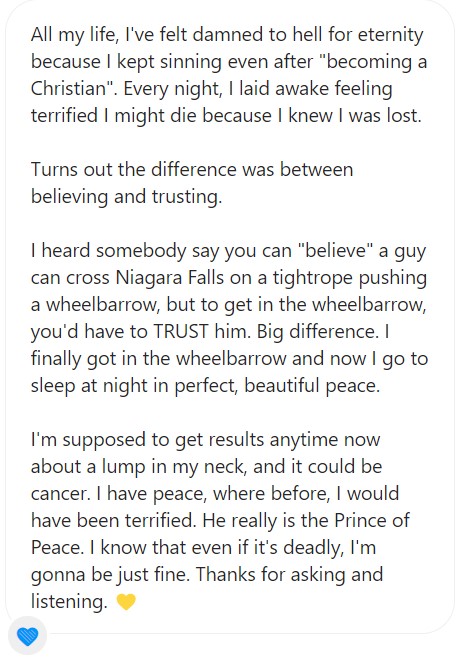