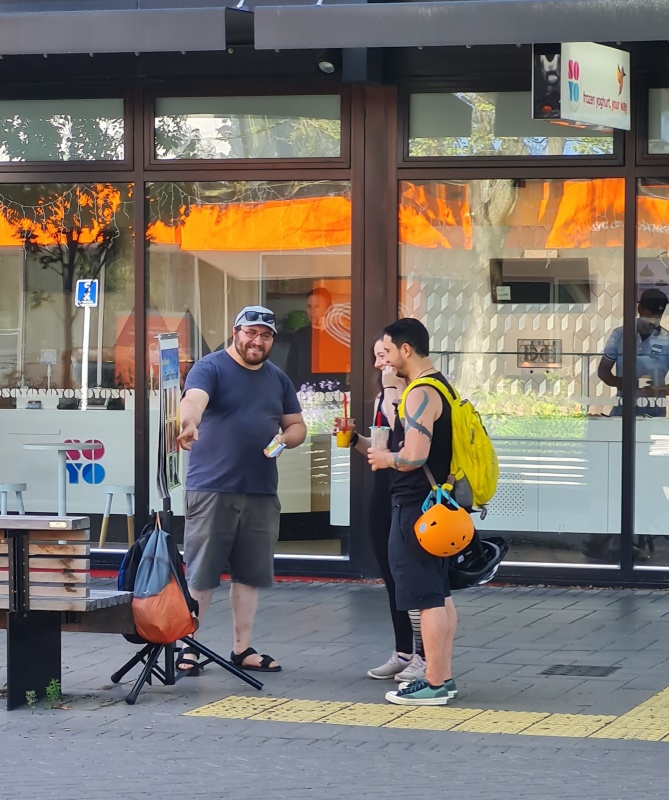 I found myself dwelling on the simplicity of the gospel as I was handing out gospel tracts and talking to people today.  Because, in some regards, what I do is so foolish.  It’s impossible for me to change someone’s mind on something so important.  I could argue and reason with people forever and they wouldn’t be convinced.  It’s for this reason that I’m so glad that God speaks so clearly to us in scripture.  I can’t convert, only God can.  What a relief!  Yet, the means he uses for that is a simple gospel message delivered by simple people like us + prayer.  What is foolish to man is the wisdom of God!  Apart from the power of God, everyone will ignore what’s written in those little 8 page cartoon tracts.  But with the power of God - and the logic of the gospel understood, even from a simple 8 page cartoon tract - everyone who reads it or hears it can be saved.  So, all the glory is God’s.

I get it, evangelism is terrifying, it’s foolish.  But I want to encourage you to do it anyway.  You may not be able to join me on the streets.  But, in your everyday life, be bold to talk about Jesus!

Normal schedule on the streets this week, although Saturday’s outreach was rained out.  And it was so good to have Mike be able to join me for a couple of outreaches before heading back to work tomorrow!  God bless ya Mike.  Like you said, when you understand what Jesus did for you, you are willing to be a ‘fool’ for him.  Amen.

So, Mike and I were in Riccarton Tuesday afternoon.  It started out as a really slow outreach.  Eventually I decided to leave Mike with the flip chart, and head across the road to try my luck on the other side.  Pretty much instantly, I was into a chat!  And then I noticed Mike had become busy too (pictured).  To my amazement, the outreach went for a whole hour extra, because we were so busy (and the last chat was really good).

The details of my chats are fuzzy now.  But I remember the last one (pictured with Mike talking to the couple).  I noticed they were sitting in the seats nearby while Mike was in another chat.  And when Mike became free, they came over.  As the chat went so long, I ended up getting involved.  The couple were in different places.  She was very argumentative, yet there was an openness from him.  I decided to engage the guy, and let Mike handle the lady.  It worked, I was able to focus on the law and the gospel with the guy where he would have otherwise been distracted.

Believe it or not, we ended up having to cut that conversation short, as I really needed to get home for dinner.  But it was a great chat.  God is good.

Friday was hot!  I was in the city.  It was interesting to see some open air preachers out.  From the little bit I heard from them I was encouraged: using amplification well, gentle voice, dealing with the crowd well (polite, answering questions).  I got to say g’day to one of them - they were down from Wellington.

It was too hot to hand out tracts in the sun, so I focused on ‘walk up’ chats.  I had three solid opportunities.

The first was with a streetie who was the same age as me.  He was keen to chat, but resistant to the good news.  He listed his many sins, but he insisted on his righteousness - so sad.

The next was a great chat.  It was with a young couple.  He cut to the chase: why is God allowing parasites to eat the eyeballs of little children?  I was able to give him the biblical answer, and then take them both through the law and the gospel.  The guy was a fidgetter, and so he ended up pretty much screwing up the tract I had given him at the start.  He was happy to accept a fresh one.

The last chat was with one of Jehovah’s Witnesses.  It was an interesting chat, because he was adamant that we become part of the Kingdom not by our work.  Sadly, his wife kept ringing him.  He wanted to stay and chat, and yet he had to go.  I need to scratch up on my understanding of what JW’s believe and why.

On Sunday it was good to have Mike and Susan join me.  I spent the first half of the outreach in one conversation.  It was with one of my recent regulars.  And this was our first really in depth chat.  It was great to be able to understand his worldview, and challenge it with the gospel.  In the end, he couldn’t accept the idea that a criminal could be forgiven.  He really wanted to think it was good work that got you to heaven (via reincarnation).  I’m hopeful that I’ll be able to talk to him (and his brother) again, and continue the conversation.  I’m going to add him to my prayer list.

I had one other main chat, with a group of American soldiers (in civilian clothes), they will be going down to Antarctica at some point.  I was able to share the gospel with them, and give them a tract to read down on the ice.

Susan had a long chat with a lady (pictured), and Mike had a number of opportunities on the flip chart. 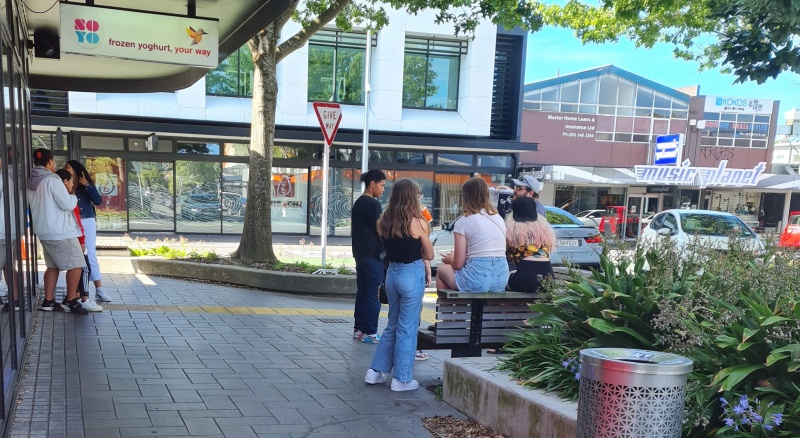 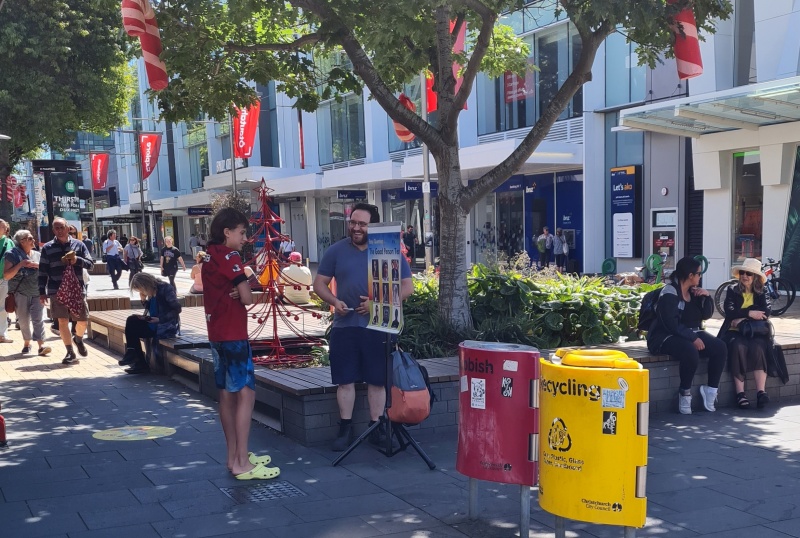