One of the greatest joys of open air preaching (apart from sharing the Gospel), is being outside. It is great to be able to proclaim the Lord of Creation outside in the Creation. Today was one of those days where it was perfect weather, and it was a real joy to be outside proclaiming Jesus. The Lord truly blessed us with great weather for today’s outreach.

When I arrived in Garema Place I noticed that the team was already there, and they were already praying for the ministry. It was great to join up with, and work alongside about 8 people who were passionate about spreading the Gospel. But what was a really encouraging was that the team was made up of different age groups. We had younger men, right up to men who would have been in their retiring years. All of which came together with the common purpose of preaching Jesus.

While we were praying I happened to notice two Mormon missionaries doing their rounds. As soon as we finished our prayer meeting I excused myself and went up to the LDS elders with the purpose of sharing the Gospel. I was surprised to see that one of the elders was a man that I had spoken to on March 10, 2012. This time he wasn’t by himself, but was with another elder. The elder I had spoken to in the past seemed to now be a little bit hostile, but the other elder was friendly. I got the impression they didn’t want to talk, so I gave them a “Joseph Smith - Million Dollar Note”, they laughed and went on their way.

After this I rejoined the team. From there we split up and began to go witnessing to different people. Since I was planning to preach I made my way to the centre of Garema Place and began to prepare for my open air. While I was getting ready a man came up to Jeremy and I asking if we could give him $130 so that he could buy a drum. He said he’d be prepared to sit and listen to the preaching if we would pay him. We refused to give him money, and that’s when the man became “strange”. He started talking about how if he gets a drum he’d play demonic music to stop the preaching, and then he went on to talk about how he killed Jesus, and how he has raped Jesus. I’ve spoken to this guy before so I knew he was impossible to reason with, so I all I could do was speak a few words about who Jesus is, and then he left. However, every time he walked past that day he would say something or make obscene gestures. 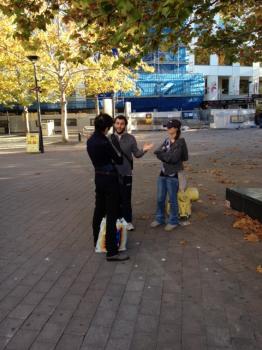 After this, I stepped up and began to preach. My text for the today was John 3:16. Now you may be wondering, “Why would you choose that text?” Simple, everyone seems to know it, or know of it, so I thought I would use something they know of as a bridge to sharing the Gospel. Some preachers refuse to use John 3:16 in the open air as it has been abused, but I don’t think the abuse of the text is grounds to stop preaching a text of the Bible. I would rather use a Scripture that people are familiar with, and then explain that verse to them. That’s what I did in Canberra today.

I started off by talking about how Australians today have no hope, but then I swung to the Gospel and spoke about the message of hope found in Jesus Christ. As I preached a few people listened, but for the most part it was quiet. But that was soon to change. While I was preaching this lady began to walk towards me yelling. At first I couldn’t make out what she was saying, but as she got closer it was plain to hear that she wanted me out of Canberra. While some people would see this lady as a hinderance to the Gospel, I saw her as a blessing to the open air meeting, as by her yelling the crowd began to grow. God used what Satan meant for evil, for good. God was using the heckling to grow the crowd.

The woman ranted for a bit about how I shouldn’t be preaching in Garema Place, then she walked off. As she walked off I spoke about why people hate the Gospel. This in turn brought more hecklers to the forefront. Two homosexual men began to mock God, and even openly bragged about mocking God. Then in front of the crowd they began to kiss.

When homosexuals kiss in front of an open air preacher, it is normally done for shock value. But in reality, most preachers have seen it all before, so it isn’t that “shocking” to us. We just use it as a tool to share the Gospel all the more. And, God once again showed Himself as being sovereign by using their actions to grow the crowd to hear the Gospel.

Around this point I put a challenge to the crowd to see if there were any good people listening. One young man named Jack replied that he was a good person. I began to engage Jack with the Ten Commandments, and I must say, Jack was very open to listening. He would answer, then nod in agreement as I shared the Scripture. The crowd was also listening to the Law, and the Gospel.

After walking Jack through the Law, I explained the Gospel to Him. I pointed out that Jesus is kind towards sinners, and that He died in the place of guilty criminals. But, I didn’t leave the Gospel there, I told him of the resurrection also. Once I finished explaining the Gospel to Jack, I asked if he had any questions. He did, and he asked them. They focused around “Science disproving God” and “What about rapists etc, will God forgive them?” I answered his questions, and called on him to worry about his own sin, and to trust in Christ.

I then turned back to the crowd and called on them also to trust in Christ, to repent and believe on the Lord Jesus.

With that, I finished my open air and stood down. But God wasn’t finished yet. All around the team was having one to one conversations. People in the crowd took tracts, and were wanting to talk.

One young lady came up to me and began to ask me questions about homosexuality. I answered her by explaining to her that it was a sin, but then I went on to talk about Jesus being the friend of sinners. Some of her friend had joined us by this stage and they were asking questions as well. I spent some time answering their objections and explaining the Gospel to them. They all took tracts and left. 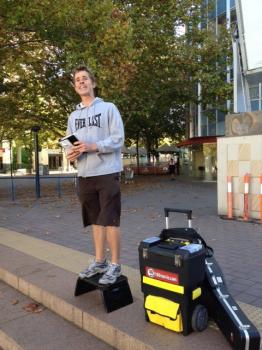 After this Ben began to preach, and as he did I noticed that there were still many conversations being had. I was later told that one lady from Belgium stopped, and she was shocked to see open air preaching as she believed that Australians were laid back. Jeremy was able to share the Gospel with her for a good time. I was also told that one black African man stopped to listen to the Gospel. He said that he had been searching for truth, and that he wanted to know who God is. He said that when he heard the preaching he had to stop and listen, stating that it made sense to him. He was very grateful that the Gospel was proclaimed. One of the team members spent ages sharing Jesus with Him, and calling on him to trust in Christ. 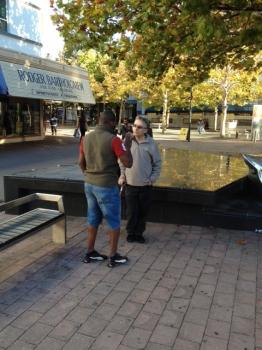 Overall the day was awesome! God showed Himself as great by allowing His Gospel to go forth. Please pray for all those who heard the good news of salvation.

Below is an audio of my (Josh Williamson) open air message: