There was a chill in the air today as we prepared to witness in Canberra, but surprisingly there were still quite a few people out and about in Garema Place. The team met at 2pm for a time of prayer, and it was great to see some new people come and join us on the street. I was particularly happy to have Chris from Goulburn Baptist Church come out and join us. He is young and very keen to share the Gospel, given some time and training I think he’ll do very well.

After about thirty minutes in prayer we split up and began to engage in evangelism. A few of us headed down the centre of Garmea Place and there we set up to begin our open air preaching. Ben was the first man up for the day. Within minutes of him beginning to preach some youth began to gather to mock the Gospel. But as with all things God was in this, and he used those young people to help draw a crowd. The group of youth sat down and listened as Ben preached. Some scorned and mocked, but others seem to be paying attention. In this situation I am not concerned if people mock the Gospel for I don’t know what is happening in their heart, while they may be putting on a “mocking face” their heart may truly be convicted. 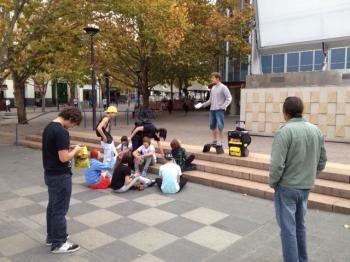 Ben preached for about thirty minutes, then it was my turn. Some of the youth stayed around and listened. One young man from the group professed himself to be an atheist, so I began to ask him questions as to why he was denying God’s existence. The young man had no answers, he simply said he didn’t believe, but didn’t know why he didn’t believe.

After speaking to him I continued to preach, and I spoke on why people hate the Gospel. I shared how the Bible declares we love our sin and hate the light, and it’s for that reason we reject Jesus. As I was explaining this I heard a woman begin to yell out at me. It was the same woman from last week who screamed at me. As with last week I couldn’t understand much of what she said. She ranted and raved about this being a free country so people shouldn’t have to have a preacher stand and preach. I tried pointing out that because this is a free country that I would stand and preach, but she wasn’t having a bar of it.

She then walked in front of me and started to yell out, “HE HAS A GUN!” At first I thought she was confused about the Bible I was holding in my hand, but then she continued to yell that I had a gun and was going to start shooting people. I pointed out I had a Bible, and that was more powerful than any gun, but still she yelled out “HE HAS A GUN!”

While these kind of hecklers are frustrating when you are trying to preach, I’ve found that God still uses them, and as this lady ranted a crowd began to build. Now all I needed was an opening to share the Gospel. Soon enough the lady stopped yelling and with that I began to talk about the Gospel to all those who would listen. Most people in the crowd stayed in order to see if the lady would start yelling again, but as long as they were there I made sure they’d hear the good news about Jesus Christ.

During this time I was able to engage with a young lady named Carly, who believed herself to be not bad enough for hell, but not good enough for Heaven. We spoke for a bit about sin, and how we all need the Saviour, then as I got to the good news she turned and left. Fortunately one of the team members saw this and he was able to give her a tract and share the good news with her.

I preached for about thirty minutes, and I had to deal with my heckling lady a few more times during my open air. After I finished preaching Ben got up to preach again.

While he was preaching I had a chance to talk to an atheist whom I had spoken to a few months earlier. This time he was calm and wasn’t yelling at me. I asked him why the change, and he said his mentor had taught him not to yell at Christians. To me it sounded very much like an atheist discipleship movement. Here you had an atheist, who is being mentored (discipled) by another atheist, who is training him in the art of ‘nothingness’. (Tell me, how is atheism not a religion?)

We chatted for a bit, but the conversation wasn’t going anywhere. We spoke about how we both wished that atheists and Christians were informed about what they believe and why they believe it, and then we began to talk about comic books (as the local comic bookshop was having a free give away). At the end of the conversation we parted on good terms, and we both said we’d chat again next time we see each other. Please pray for him.

Overall it was a good day, the Gospel was proclaimed and Jesus was exalted!