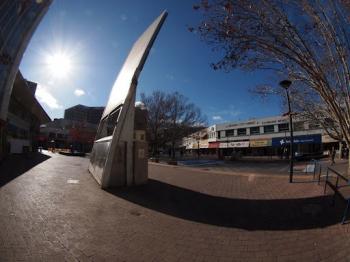 It’d been a few weeks since I was last out on the streets witnessing. With all that had been going on in my last job I just found my time was severely limited. However, today that all changed, I once again was able to head into the city centre of Canberra to proclaim the Gospel.

I arrived in the city at just after 9am and met up with Ben. We had a short time of prayer and fellowship before heading off to begin telling people about Jesus. The morning was fine, and the sun was putting out some warmth, so we went and stood near the bus stop and began to hand out tracts to those who were making their way to work.

Since people were scarce during this time Ben and I split up so that we could cover more ground and witness to more people. As I stood by the bus stop handing out tracts I noticed this one lady watching me. When she saw that I had noticed her she cam over asking what I was handing out. When I informed her it was a Gospel tract she said, “Oh! You’re a Christian, I’m a Christian also.” Sadly, I have found that in the nine years I’ve been involved in evangelism that someone claiming to be a Christian can sometimes mean very little, so I asked this lady (her name is Rosemary) how she became a Christian. She smiled and said, “Became a Christian? I’ve always been one, I was born a Christian.”

Rosemary like many other Australians believed herself to be saved because she was born into a “Christian” nation. Yet, as we look at the Scripture we see that our national and cultural heritage does nothing to merit salvation. In Philippians 3:4-8, the Apostle Paul states that if there was any merit in his heritage or works then he’d have been saved. But then he goes on to say that he had forsake trusting in those things in order to gain Christ. Salvation is not by heritage, tribe or nation. You cannot be born a Christian, that is why Jesus says in John 3:7, “Ye must be born again.”

I tried to explain to Rosemary that her salvation is not based on who she is, or what she has done, but that salvation is dependent upon God. From there she began to talk about how she was a good person, and that must mean something. Once again I had to point out that her good works are as filthy rages (Isaiah 64:6) and that only the work of Jesus can save sinners. After hearing the Gospel Rosemary left, taking a tract saying she’d think more about what I said. Please remember to pray for her.

After Rosemary left I continued to hand out the “Stop” tracts to those who were crossing the road from the bus station. As I offered one Asian man a tract, he stopped, and said, “Is this religious?” I replied by stating that it was about the Lord Jesus Christ and what He has done for sinners. This man stood there reading the tract, and then said, “I’m a Buddhist, I don’t believe this.” From there the conversation was off and running. It turns out that this man is named Wai, and he is from mainland China. Until last year Wai had been the product of atheistic communism, he believed that all religion was evil, but then he met some Buddhists who lived moral lives. He concluded that they must be right, since the Buddhists were “good people”, with that logic he converted to Buddhism, and moved to Australia.

Wai told me that he was a good person at heart, and that one day he’d come back as something better in this life. So I asked him, “When you die, who will judge your deeds to determine what you come back as?” Wai looked at me blankly, and said, “I don’t know.” From there I was able to tell Him of the only true God, and how that God had given us a moral law. We walked through the commandments and Wai began to see that he wasn’t a good person, and that God would be forced to judge him.

When Wai realised the depth of his depravity, I told him the good news, that God had done the only thing possible to forgive sinners, and that was to die as their substitute. It turns out that Wai had never heard the message of Jesus, he’d never heard the Gospel. So on the streets of Canberra at around 10am in the morning Wai got to hear the good news concerning Jesus for the very first time.

Our conversation finished with Wai wanting to learn more, so I gave him a tract, and a Gospel of John. Please pray that God would save Wai.

Around this time Ben had returned from handing out tracts and talking to people. He’d had a few good conversations, including one with a former trainee Roman Catholic priest, who is now into new-age atheism.

After sharing what we’d both encountered so far that morning we headed back into the centre of Garema Place, and there we began to declare the Scriptures aloud. People by this stage of the morning we starting to do their shopping and enjoy the sunshine, so we thought it was a good time to read God’s Word.

During my reading a man named Tim walked by, stopped, listened, and then went to Ben to ask more questions. Ben was able to share with him the good news about Jesus.

God was blessing the reading of His Word! After Ben finished witnessing to Tim we thought it’d be good to read a larger chunk of Scripture, so we decided to read all of 1 John.

Ben began by reading 1 John 1, and then he handed it over to me for me to finish the book. As we read we noticed that people were stopping and listening. Some were even sitting down to listen, others were standing drinking their coffee while listening to God’s Word be read. There were a wide variety of people listening, from men in suits to teenagers in street clothes. Different nationalities and cultures were present also, all listening to God’s Word.

Some stayed for a chapter or two, others stayed for the whole thing. God was blessing the reading of His Scripture.

Now from a pragmatic position we’d done everything wrong. We are constantly told in evangelism that we shouldn’t open air preach, and if we do, then we shouldn’t use our Bible as that may turn people off, but if we do use our Bible make sure it’s anything but the Authorised Version (KJV).

Well, we broke all those pragmatic rules. We open-air preached, we used Bibles and we read from the Authorised Version. Yet, as we did so you could hear people saying “Oh, he’s reading from the Bible.” The language of the Authorised Version seemed to be helping us, as when people heard the “Ye”, “Thou” etc, they knew it was the Scripture, and not some other book.

After reading seven chapters of the Bible we decided to start open-air preaching. Ben went first and he did a wonderful job in lifting the Saviour high, and laying the sinner low. While he was preaching two workmen walked path laughing and mocking the Gospel. Ben on seeing this addressed them and pointing out Christ died for sinners (including mockers), they fell silent as they walked away.

Around 11:30am, it was my turn to preach. It’d been awhile since I have open-air preached so I sent out a tweet requesting prayer from my brothers and sisters in Christ. As I thought about what to preach I thought I should address the question of “If there is a God, why doesn’t He do something about evil?” This question is very common to those who would seek to reject Christianity.

I began preaching by stating the question, and then I went on to read Genesis 6:5-8, pointing out that God does deal with evil, but the problem is, we are the evil ones. A good size crowd gathered as I preached, and there were no hecklers. You can listen to the audio of my open-air below.

After I finished preaching I was approached by young lady who had been listening to the whole message. Her name was Oonah (Irish background). She disagreed with what I said, and found the concept of surrendering and being a slave to God as repulsive. I explained to her that I was happily a slave to my master the Lord Jesus, and then pointed out that she was a slave also, a slave to sin.

The moment we started to deal with the absolutes of morality Oonah showed her postmodern mindset. Nothing became right, and nothing became wrong. All morality and truth was subjective. All I could do was keep replying “This is what God says.” Ultimately the reason she disagreed with the Gospel is because she loves her sin, and she doesn’t want to submit to the Lordship of Jesus Christ. That is the only reason she’d reject Jesus.

After a few minutes of talking to her she said she had to leave, however, she did take a Gospel of John and the book by John Blanchard, “Ultimate Questions”. Please pray for Oonah, may God reveal that He is a kind master, and that He is absolute truth.

Audio of the Open-Air: