On Friday, 28th November, the team was out once more in Leicester Square to preach Christ crucified. We were seven strong: Glen, Waithera, Esther, Andrew, Kwadwo, Steven, and Rob.

After meeting in Caffé Nero for a time of prayer and Bible study, we headed over to the Square. It was very loud due to a carnival atmosphere, but I was still able to preach for a short while during one of the quiet periods!

Due to the ambient noise the open-air did not bring in a big crowd like the week before, however, afterwards we all managed to get into some great conversations! Here are a few highlights from the team... 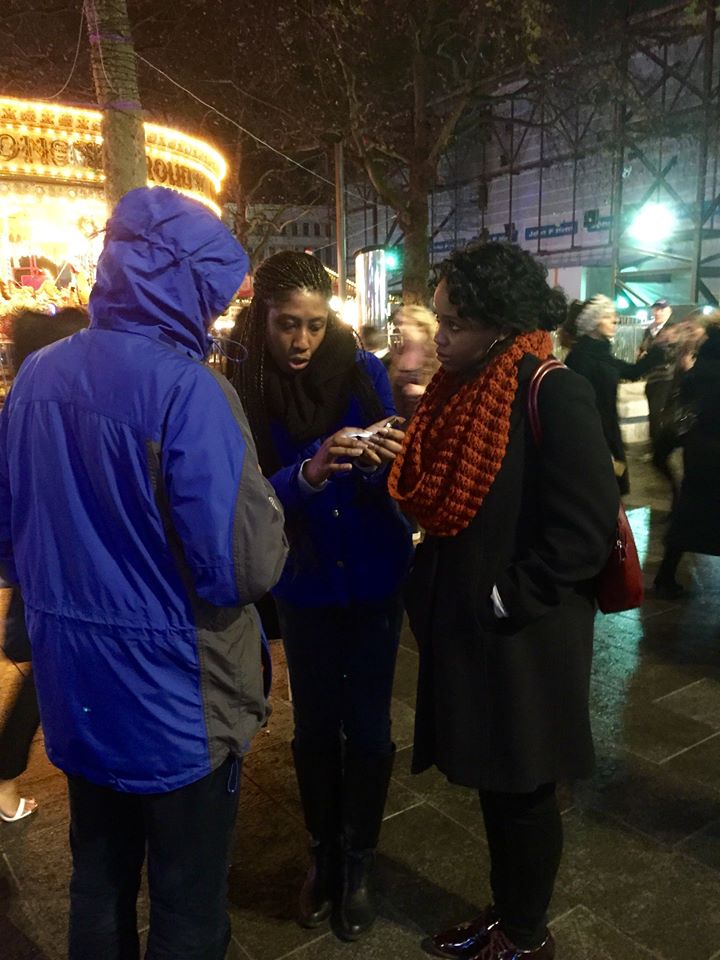 Waithera: On Friday, Esther and I talked to a homeless guy from Angola called Jose. He had a lot to say against the church, against prosperity teaching, etc, and said early on he wasn't a Christian. Later on he said he wasn't clear on why Christ died and questioned whey the Bible is our final authority. Esther and I are hoping to see him again. We then spoke to a Polish man and his friend. The Polish guy's name is Radek. He was very honest about his sin and about his state before a holy God. I went through the gospel with him and Lord willing he will be meeting up with Esther this Thursday as he goes to the Uni near where Esther works. She should be giving him a Bible and he did say he may come to church sometime so please pray for him. (Waither and Esther are to the left)

Kwadwo: Firstly, I had a conversation with two Muslims, one called Jordan and another I believe called Francesca. Jordan was the most vocal, acknowledged he was a sinner but essentially thought he can always chance it with Allah. In sum he denied the gospel because in his words he couldn't understand it, nor the Trinity. Next I had a conversation with a group of about three to five 17 year olds. They largely heard the gospel, but only one who maybe had a bit of a Christian background seemed very genuine in her questions, and she would have asked more if her friends weren't in a rush to go. Finally, I spoke witha a girl called Irene. She had a very interesting stance on things. She listend as the gospel was explained but wouldn't accept due to not wanting to be a hypocrite... She largely gave up knowledge and seemed content with that. I think an 'experience' of Christianity and of past believers hampered her view on the faith. Please pr 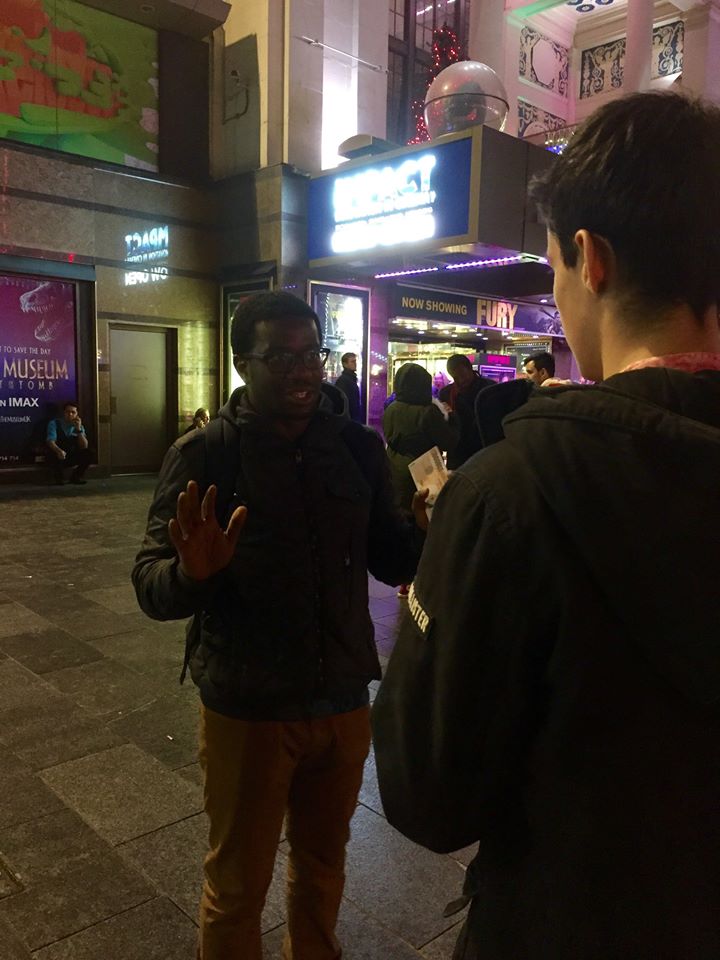 ay for her, because she has heard the gospel and she does know that she needs to repent. (Kwadwo is in picture to the right)

Steven: I spoke to a guy called Daniel who denied the God of the Bible as something made up by "the system." When I pushed him to account for his knowledge of this it basically boiled down to him knowing it because some higher power revealed it, but he couldn't account for the truth of this "revelation" either. He knew because he knew. Also, I had a conversation with a guy called Kan, not sure if he was all there but he was very open to know more about the Gospel so we exchanged e-mails.

I had an encouraging conversation with a young couple earlier in the evening who listened well as I explained the gospel to them. We spoke for some time and it did amaze me how prepared they were to stand and listen to what I had to say. God is so good. Towards the end I asked if they had ever heard anything like it before, and they said no. But then they said that it made a lot of sense, and that there was nothing they could come up with that could rebutt what they had heard. They left saying that they had a lot to think about. Do pray for them!! (the Lord knows their names).