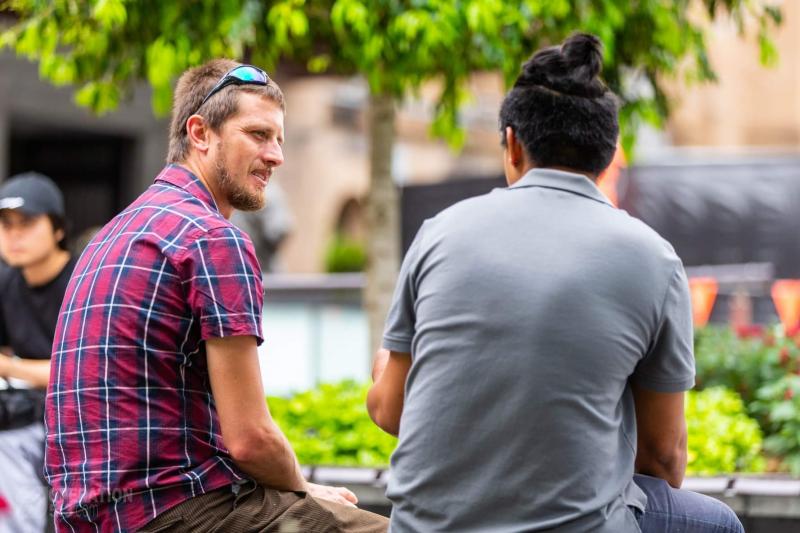 As the outreach started on Monday at Capalaba, an older lady was engaged. She started talking about things that the JW's believe and it became clear that is what she believed. Whilst the conversation was going on with her there was another lady sitting near by who didn't want to have to listen to the discussion. She made some comments under hear breath to try and gain some attention but then after almost fifteen minutes she got up, walked over and yelled, declaring, "Stop talking to this lady, she doesn't want to know what you have to say".

The rude interrupter, was simply asked if she knew if God would send her to Heaven or to Hell after she died. To which she responded that God didn't exist but at this she walk a few metres away and then remained silent.

Sadly through the discussion, even opening up the scriptures with the JW lady, she was unwilling to acknowledge what God had said. She read some passages and yet would simply say, "It can't mean that". Saying basically, "The text doesn't mean what it actually says. This was a very sad moment, she was so committed to her pre-conceived ideas that she was not interested in what God actually had said.

The afternoon was filled with a mixture of other conversations. Jean said she didn't know what happens after we die but thought she was good. She tried to use her, "I don't know" as an avoidance at first to talking futher but then was happy to talk and heard the Gospel.

Puneema and Rista, two young indian ladies were being silly in and attempt to not be serious about God. The heard the law and the Gospel and left with tracts.

Daniel, loved his sin and his primary attempt to defend his sin was to claim that Jesus wasn't really God. He took a tract but didn't hear the Gospel.

The afternoon finished with some more exciting conversations,

A young man Lachy, had no arguments, he seemed to be affected by the law and the Gospel and was very interested in talking. He left with a Gospel of John.

Also a lady named Samantha, after hearing the condemnation of the law struggled to understand the Gospel. Using the pictures on the back of the tract she seemed to understand but only time will tell.

Please be praying that God would continue to work in the lives of these men and women. God has graciously provided them all with an opportunity to hear His offer of salvation, please pray that He would also change their hearts, that they may know Him.