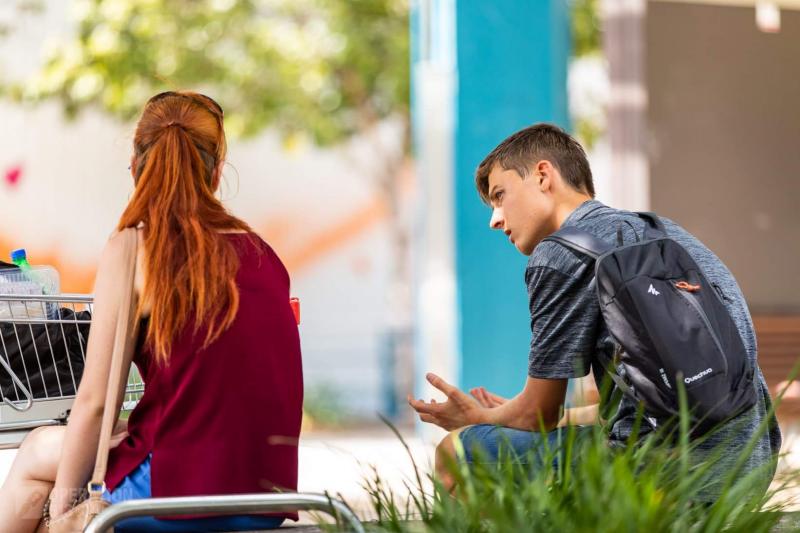 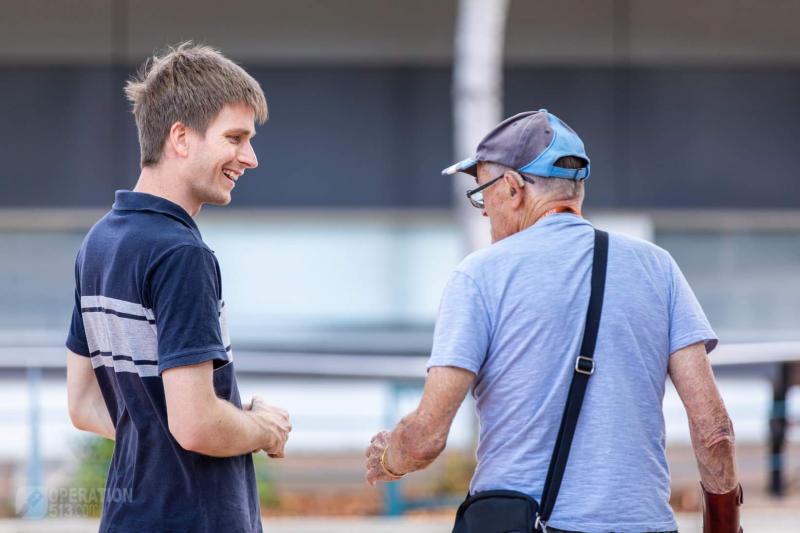 At Capalaba on Monday the team had many conversations but also a very eventful afternoon.

An early conversation was had with John a walking contradiction. John declared that if God exists he is definitely going to Hell but then went on to explain that he had never done anything wrong in his life. Which was then followed by an explanation that he has just lived his entire life however he wanted and no one will hold him accountable nor change his mind.

John heard God's law, saw his sin but palmed it off as unimportant. Sadly due to John's lack of care regarding the law, it seemed vain to share with him the Gospel. So he was left strongly with the condemnation that sin brings.

Following this conversation, Luke and Seisha a young couple waiting at the bus stop were spoken to. During the conversation Luke shared he went to Citipointe youth group and Church but sadly didn't know the Gospel. He had some notions of Jesus' sacrifice but couldn't quite work out why Jesus had to die and how we are saved by it.

During the conversation Luke was showing signs of not being physically okay and was momentarily lapsing and unable to respond. This got worse very quickly and so the conversation was cut short as an Ambulance was called.

Later in the afternoon this opened up a brief conversation with Luke's mother but sadly she wasn't too interested in speaking. She did mention that she may go to church with her son sometime though.

The afternoon also held a range of other conversations.

Nikita heard the bad news and an introduction to the Gospel before her bus arrived and took a tract saying she would read it.

Sorem and Lissa also saw their sinfulness and were pointed quickly to Christ as the solution when their bus arrived.

Philip and Liam were in the same boat. They were less interested but will still happy to talk until their bus arrived.

The last two conversations though were quite interesting.

Last conversation was with a man named Nero. Who said he was a good guy who didn't do wrong things. Then when asked if he had ever lied he went on to mention that he had to lie for his job. This was surprising, at first he was good, then he basically admitted that he was paid to tell lies.

He went on to hear the desperate wickedness of his sin and its consequences and how seriously God takes sin. He then was asked if he had any idea of the solution and said he didn't know but mentioned that he had felt really guilty about his job and had thought about leaving it.

He then heard the Gospel and was given a picture tract to really illustrate what Christ has done and how we should respond.

Please pray more specifically for Luke and his family and for Nero.

Please pray that Luke's condition would improve but also that the serious health problems he had will lead his family to seriously consider their own mortality and therefore their eternity.

Please pray that Nero would heed the seriousness of his sin and therefore come to total surrender and trust in Christ for his forgiveness.