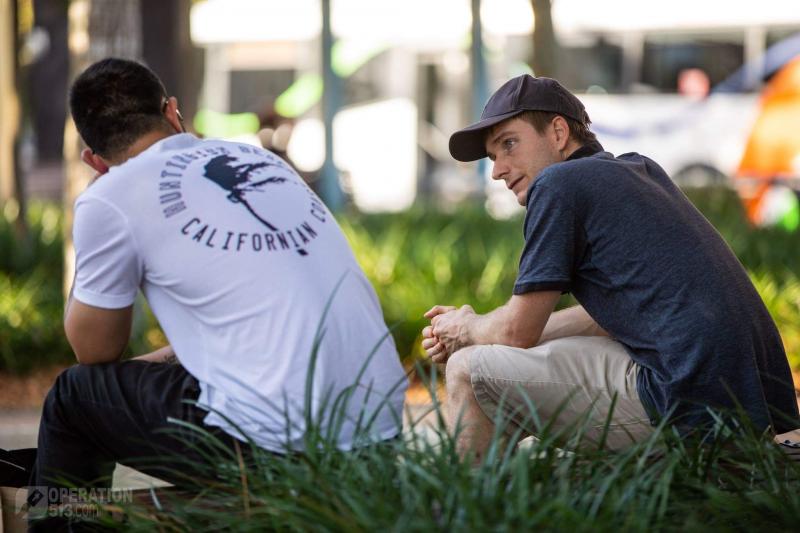 On Monday at Capalaba the team had an afternoon filled with Gospel conversations. As is the way with Capalaba, there is constantly cycling people around the bus stops, enabling and encouraging consistent conversations.

Three highlight conversation were with Jasmine, Jacob and Charlotte.

Jasmine was a lady that attended a local Church. She professed to be a Christian. When asked what the way to Heaven was, she was very clear that it wasn't by good works but she was unable to articulate what it was that actually got someone right before God.

She was engage and taken through the law and the Gospel so that it was clear for her. She said it made sense and she was encouraged to read the book of Romans so that hopefully she could understand more clearly what God has said is the way of salvation.

The next conversation was with a man named Jacob. Jacob looked like the type of guy you don't want to approach and speak to. But to the teams surprise he was happy to talk! He was taken through the law and shown his sin. He was asked what he thought the solution is and didn't have an answer and then heard the Gospel. He comprehended it and when asked when he would trust in Jesus he said, "I think I will have to do it tonight!"

Praise God for the work He does in bringing unbelievers into His family. We know that it isn't our wise words or abilities that cause someone to want to know God but rather it is God at work in their hearts.

Thirdly was a conversation had with Charlotte. The conversation occurred because he bus came almost 37 minutes late! Praise God for His grace!

Charlotte has a strongly atheistic family and as a result had never heard about God or the Gospel. She was shown step by step who God is and how we know. What God has done and what He has asked us to do. She was then shown by comparison to God's law what the problem is, that God must hold us accountable for our sin and then she heard the Gospel and understood it.

She actually responded, without being challenged, that it was something she would have to heavily consider. She even talked about counting the cost because it could mean rejection from her family! She said she was grateful for the conversation and that she would heavily consider what had been said.

Please be praying for these three conversations that God would be working in their hearts, to bring them to faith. Please also pray that they are strengthened to face any trials that might come as a result of their profession of faith.