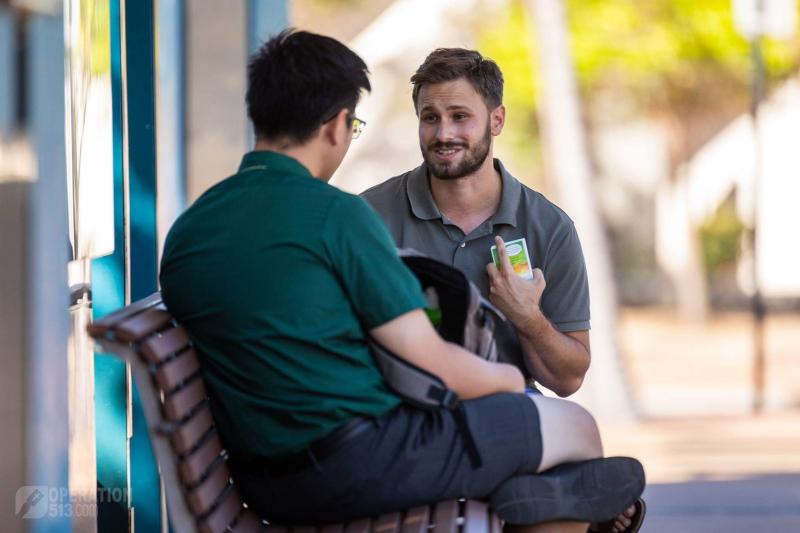 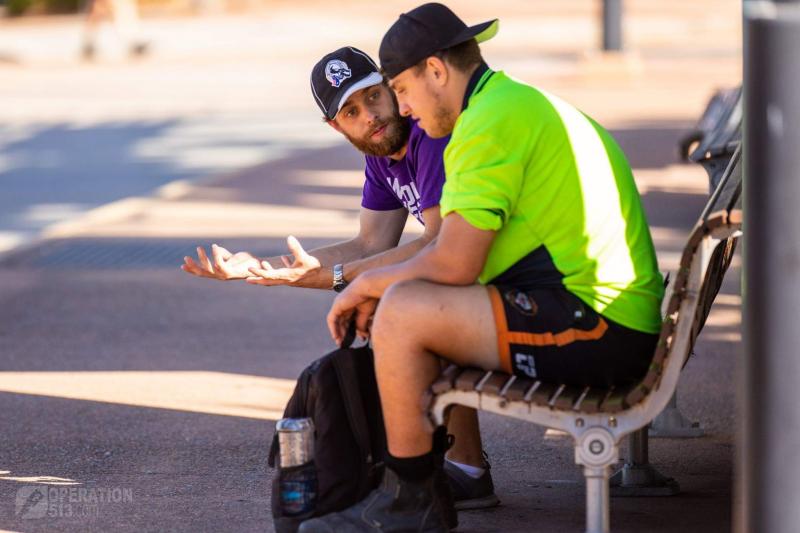 On Monday at Capalaba the team swelled in size by 50%! It was exciting to see a new local Christian commit to coming to the outreach each Monday! It was an exciting afternoon that ensued when all three team members had fifteen conversations each, whilst each member had a couple of really encouraging conversations as well.

An early and very timely conversation was had with a young man named Jai. He at first was skeptical of God's existence and then heard the building, builder analogy, presented in the "How We Know God Exists and Why it Matters" tract. He then agreed that there must be a God. Next he was challenged on why he would argue why God doesn't exist and it was pointed out that it has to do with God's expectations of His creation. If there is a God, there are things He has asked of us. So often, people argue that there is no God to try and avoid His judgement.

Then Jai heard God's law, like a mirror it revealed his sin and he saw the predicament he was in. The life he had lived had left him with a debt he deserved to pay. Jai's life had earnt him an eternal Hell punishment. When asked if there was any solution other than him paying, Jai wasn't sure.

A short discussion ensued which came to a close as the Gospel was explained. On the first explanation Jai didn't understand properly how one is saved, he thought it was by being good. So the Gospel was re-explained using another analogy and he got it! Showing that he understood he used the same argument that Paul answers in Romans 6, "Isn't the Gospel just a get out of jail free card, where you can do whatever you want but still go to Heaven?"

It was exciting to see he had understood and the explanation was given, using the crocodile analogy, that after being saved by God, out of gratefulness to Him for what He has done, we will want nothing to do with the sin that once enslaved us and instead want everything to do with that which honours God!

It was right at this moment that Jai's bus arrived, he was thankful for the chat and said he would read the tract! Praise God for His timing and providence and please be praying for Jai that he will strongly consider what God has said and will count the cost and choose to trust in Christ alone!

One of the downsides to bus station evangelism is that you don't always get to finish the conversation where you wanted, rather God and His timing decides when the person had heard enough. This means, efficiency in presentation is key but also remembering that God works on His own timeline. From Monday there were a range of conversations where God's existence was established, God's law and the consequences of breaking it was shown and the question was posed, "How can a Hell deserving sinner, get into Heaven?".

These conversations occurred with Anabelle, Maddi, Jayden, Bruce, Mick, Teagan and Kiara. Please keep these individuals in your prayers, that God would use the law to leave them wondering over and over about the question, "How can a sinner be forgiven?" and ultimately use the tract they took, a Christian they know or even another conversation at a bus stop to bring them to a knowledge of the Gospel. Please be praying that they cannot get this question out of their mind until it is answered.

One final conversation was had with Dewi, a young guy who the team has spoken to many times. At first during the afternoon he made a joke about wanting to avoid speaking with the team but as the afternoon drew to a close he happily sat down and chatted with the team. This conversation went deeper than a usual Gospel conversation and was filled with a heart to heart discussion about why the team cared about him, why they wanted to challenge him and share with him week after week and he seemed moved.

Please be praying for Dewi that he would seriously consider the Gospel and trust in Christ alone for His salvation and as a result turn from his sin, to living a life honouring to God!