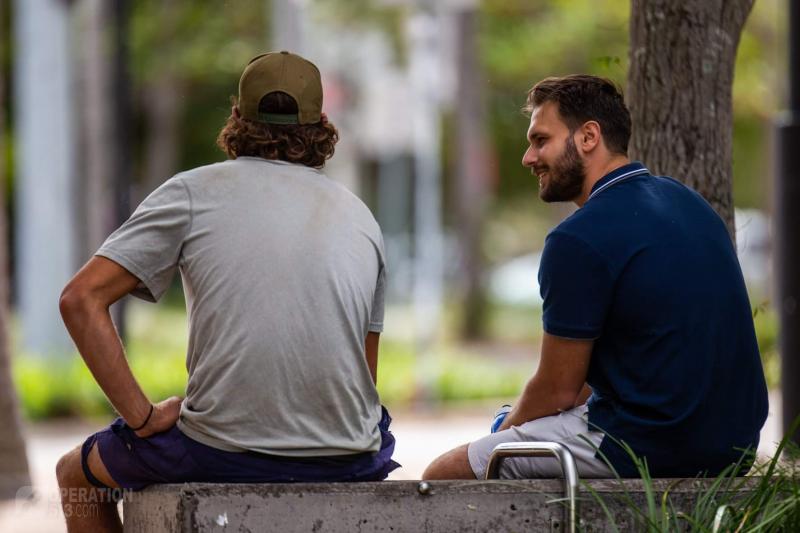 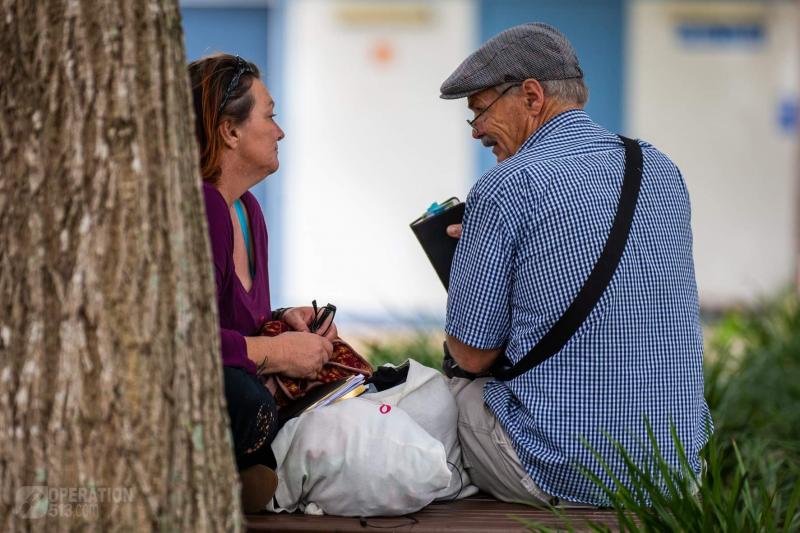 On Monday at Capalaba another new team member made it along! It is worth noting that even though this is (in terms of team size) the smallest outreach, it is a really good training ground. Due to the bus stop environment with the short conversations and the need to approach someone to be able to talk, it trains one in reliance on God for efficiency and boldness. Maybe if you have a chance, you could join the team at Capalaba one Monday?

The first conversation of the afternoon was had with Angus-Lee and it was very exciting. All the way in the car drive over prayer to God for boldness was being had and not only did God answer that prayer He also encouraged the team with an afternoon filled with many exciting responses. Angus was the first.

He at an instant said that he was going to Heaven because he was a good guy. Then was shown God's goodness, why that means He must punish all sin and therefore we are in big trouble because each of us has a long and in depth history of sin. He saw the problem and acknowledged that he was in trouble.

Then the Gospel was explained to him and he seemed to take it on board. To check he had understood, so as not to leave him with a false Gospel by accident, he was asked what he must do to be saved and responded, "believe in Jesus". Although true, it seemed as though he didn't understand it and so the Gospel was articulated another time and a second checking question was used, "If you were to realise today that your sin deserves Hell, understanding that you have no ability to save yourself from that fate and therefore trusted in Jesus and what He has done to pay for that sin, then on your way home today you did one more sin and died five minutes later, would you go to Heaven or Hell?"

This question he paused at, he was not sure but he said tentatively, "Maybe Hell?" and he was asked, "Why do you think that?". And he responded, "Actually you're right, I would go to Heaven because I have trusted in Jesus to pay for my sin". What a joyful moment to witness, someone for the first time understanding the Gospel. Then Angus was posed with the question, "When are you going to trust in Jesus?" to which he responded, "Today".

Some follow up questions about counting the cost and encouragement were given and he was encouraged to go to a local Church. Please be praying for Angus that he would come to know God and will begin to walk in a new life with him.

Another conversation was with a man named Callum. He had spoken to the team before and heard the Gospel but had still rejected it. He said it was because there were so many "gods" in the world and he couldn't know which is right. A few simple explanations were given about how one can know and he agreed that it made sense. The challenge was put forward that the real reason for the arguments, was not because they were questions that had really plagued him and he had been searching for answers but were rather being used as an excuse to avoid thinking about it.

He acknowledge this was true and was once again point to the law and Gospel and left with the very serious challenge that, he could stand before His Creator this very day.

A final conversation was had with Hayley. At first she didn't seem that interested in talking but after a couple of questions happily engaged through a conversation. She had little understanding of Christianity but through the conversation came to understand the Gospel.

When at the closure of the conversation she was challenged to consider why she would reject Christ and she said, "It is because I don't know Him well". She was encouraged to open up the pages of the Bible and come face to face with the God of this universe in His word and was reminded one final time that she can know of the depths of His love because of how far He was willing to go to save sinners.

Please be praying for Callum that he would not reject Christ in an attempt for autonomy and that Hayley would seek to know who God is and as a result fall in love with Him and what He has done for her!