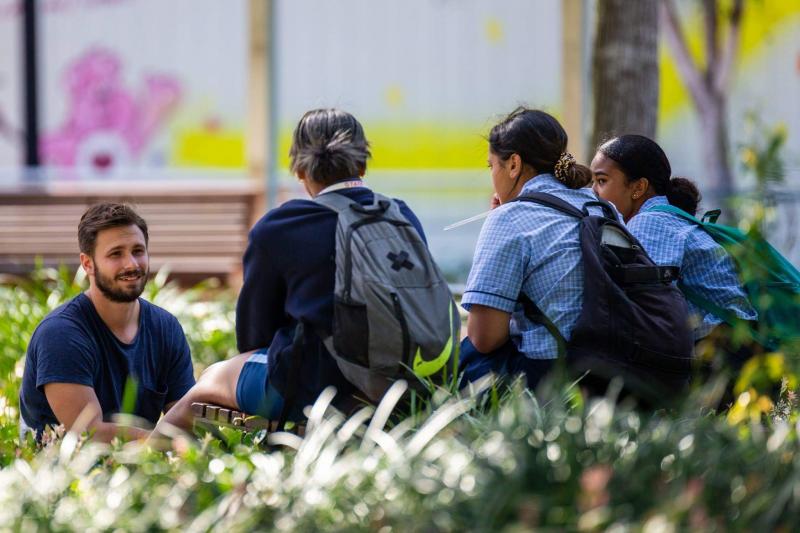 This afternoon at Capalaba the team set out early in the afternoon to have some conversations. Upon arriving it was noticed that some JW's had set up their stand at one of the bus stations. The team prayed and split and the first conversation was had with these two ladies, Lauren and Dena.

Lauren did most of the talking. It was very sad to hear what she had to say, she didn't really have many answers to the questions posed. The first question asked and most important and central topic was, "How can someone be made right before God". Lauren listed five things, "Getting baptised, trying your best to obey God, reading your Bible, trying not to do the wrong thing and being sincere in asking for forgiveness". It was pointed out to Lauren that these were all based on human efforts.

It was pointed out to her that God's standard is perfection and that the best we can offer even in her list is a long way short of perfection. It was so sad to see that she mentioned nothing of Jesus Christ. The good news was briefly shared and she was challenged to read Romans 3-5 and to see what Paul has to say about how someone is made right before God.

Two exciting conversations were had with Damien and then Taylor.

Damien at first said that he thought there was no God. Upon being challenged with the building, builder analogy he admitted their must be a God but said it couldn't be the God of the Bible. When asked why he gave a few reasons and answers were given. It was pointed out at this early stage that it isn't primarily intellect that stops people from being Christians but rather a desire to sin. Damien then mentioned that he once was a "Christian" and that he did at one stage believe in God.

He was shown God's law as to his sin and was pointed to the penalty, the eternal Hell that he is headed for. Damien became quite sober in this conversation and wasn't being so dismissive but rather seemed to listen to what was being said. Just as the Gospel was about to be shared his bus arrived, he was given a tract and was encouraged to read and and the hope of a future conversation was mentioned. Please keep Damien in your prayers that he would read the tract and come back next week with questions!

A lengthy conversation was had with Taylor who at first seemed uninterested in talking as she mentioned that she had spoken to the team before. Taylor said her primary reasons to disbelieve in God were experiential. She had been forced as a child to learn about God, She had seen some "Christians" do some evil things and she had been mistreated by someone who claimed to know God. She was taken through God's law and saw her sin but kept trying to minimise it.

She was playing the usual game, jumping between trying to reject the existence of God and trying to argue that she wasn't that guilty. This went on through a few Gospel presentations and she seemed to understand the Gospel well. But her issue remained a love for sin. She talked about things she wanted to do that God disallowed. Then as the seriousness of the issue was being stressed another young man, who knew her came by and took her away to chat with her, which ended the conversation.

But by God's providence he hopped on his bus and she actually willing and came back over to continue chatting. She was challenged on a few more things, had the Gospel re-iterated and was strongly challenged on the seriousness of the decision she was making. Please keep Taylor in your prayers that she would heed the message proclaimed and turn to Christ as her Saviour and Lord.

One final conversation was as the afternoon came to the end the team of JW's swapped and so what was planned on being a short conversation was started with Patrina and Teagan. The conversation was initially intended to simply encourage them to have a read of the letter to the Romans, chapters 3-5. They shared that they had just read it the week before and so the question was posed, "How does Paul say we are made right before God?"

Patrina responded, "By exercising faith (doing the things the WT says one must do) and by doing good works". It was pointed out that Paul actually says the very opposite of that. The beginning of Romans 4 was read, and verse 4 and 5 were emphasised; "Now to the one who works, his wages are not counted as a gift but as his due. And to the one who does not work but believes in him who justifies the ungodly, his faith is counted as righteousness".

But Patrina then tried to argue that this simply meant that God opens the door to the ungodly by letting them enter but then they have to show worthiness through their actions. Patrina kept saying directly contradictory things, "No one can earn their salvation, God gives it as a gift to those who do good works". Sadly she couldn't see the contradictory nature of this and she tried to take the conversation elsewhere. The pair were encouraged to read their Romans 1-5 and spend some time trying to see what Paul was saying about how one is made right before God.

Please pray for the four JW's spoken to today that God would use His word to lead them away from the deceptive false teaching of the Watchtower.