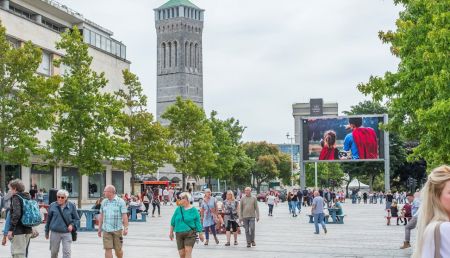 On Saturday 4th May, there were just two in our team available to go out, was still a really blessed time and God was so good to bring many different people across our path that day.

While I was setting up, a man who had been begging came up to me with a coffee he had been given that he didn't need as had two. He asked me what I was doing and I explained we were a Christian ministry about to speak to people about Jesus and the afterlife and hand out tracts to people.

The man said he was named Phil, and that he was a spiritualist/medium who says he has/can see demons! He took some tracts to read which was good, and I believed what he had said!

Three young people of Primary school age came to look at the intelligence test while I was finishing setting up the gear, and they were eager to try and get them right, and with their Mum and Nan were able to go through the good person flip chart. I was aware I would have to simplify/ explain some of the pictures and what I was there for as the boys were age 8-10, but they listened very well and took some comic book tracts and said they understood the gospel message that wa shared.

Laurie and I managed to pray before we properly started as usually as soon as we put up the intelligence test questions people start to walk by and stop to read. Teenagers from the school I work at walked past again which Laurie managed to witness to and give tracts and answer questions, as well as a member of staff who brought her 23 year old son to listen after a conversation with her at work about what we did. He listened intently, and his Mum was visibly a bit taken aback at all we spoke of but managed to stay and he took some tracts to read and said he had a Bible to read.

Just before I started preaching I managed to get two University students to stop to talk. As I was witnessing to them, another man walked past, stopped and interrupted us asking what I was talking about. He was visibly on drink/drugs but was coherent and listened intently as I shared the gospel ith the two guys, and when they left he stayed to talk. He was called Dean and said he had been to prison over 30 times before for different reasons.

I managed to share the analogy of his fine being paid in relation to prison and the judge, and he was happy to take tracts and a Bible to read. (I shared this encounter at Church the next day and we all prayed for him as I really felt a strong conviction for his soul and difficulty his life was in.)

I later managed to preach linking Thanos in the latest Avengers firm and his special glove with the infinity stones in and peoples choice of what they would do if they had those powers? Some people had said they would bring back all the people in the world that had ever died, or getting rid of bad people, so I asked if the public would therefore still be around? I mentioned a woman who had recently been in the news filmed secretly on CCTV stealing money from woman in her care with Alzheimer's, and what we do in secret and in the dark is seen by God as if its light, meaning we all needed a Saviour!

It led to some people stopping to listen and more tracts and conversations with people, Laurie notably speaking to another man that stopped that looked like he had been in a bad way with the law, and with the beautiful weather and God's grace we had a blessed day with lots of people having the chance to read a tract or listen to the gospel being preached.