It was a joy to join with Matt and the Operation 513 team in Plymouth this afternoon. The weather was perfect for open-air evangelism and many people were out. 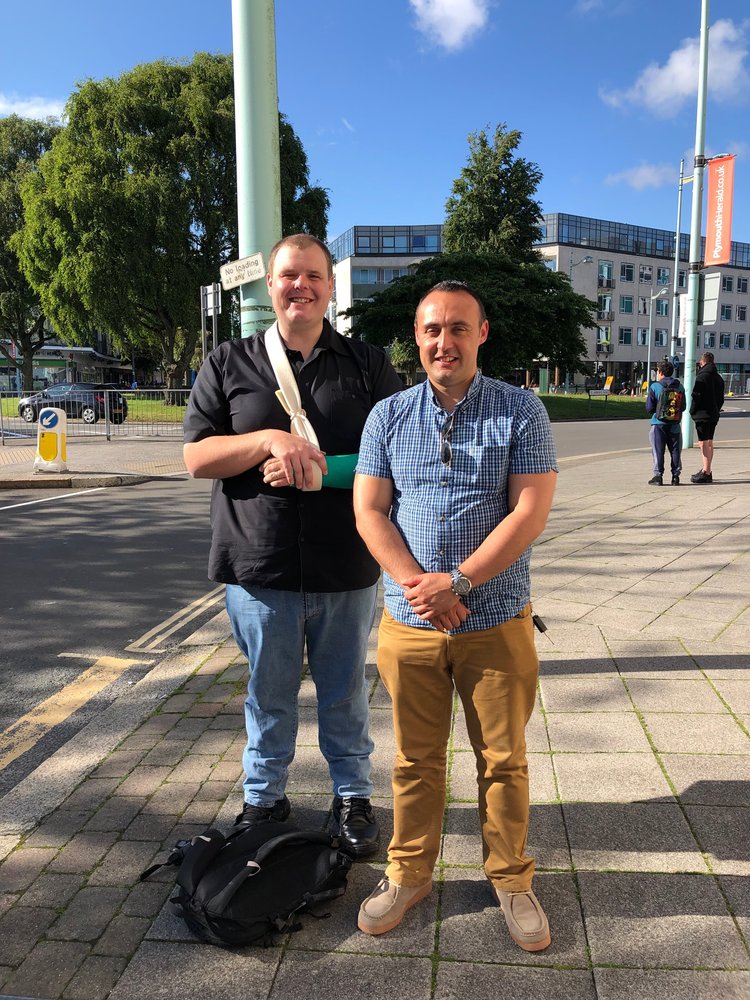 I found it quite easy to hand out tracts as most people seemed to be receptive. While I was distributing literature a homeless man named Paul yelled out, “There is no God!” I walked over to him and began a conversation.

It turns out that Paul has been on the streets for 18 months due to crack addiction. Before bowing to the idol of drugs, he worked in support of the English rock band, Oasis. He told me that he rejected the Christian understanding of deity as he was a spiritual medium.

We spent a bit of time talking about the spiritual realm and Christianity. As we chatted Paul really warmed to me. At the end of our first conversation he shook my hand and took a copy of the tract I have written.

I now went back to handing out tracts, and soon I was in another conversation, this time with a young man named Zane.

Zane had gone to Christian school but had no idea of the gospel. He told me even though he had heard stories he hadn’t really understood where Jesus fitted in. Zane said that he was good, though not perfect, so he hoped God would let him into Heaven. We chatted for a time about sin and judgment with Zane soon realizing he deserved Hell.

I then was able to share the gospel with him; for the first time he heard the good news of Jesus. After hearing about Jesus paying the fine for sinners Zane said, “That makes so much sense.”

Zane took a Gospel of John and an invite to a local church. He told me that he would be reading the Gospel so he can find out more about Jesus.

It now came time for me to open-air preach. As I prepared I walked back over to Paul who was sitting near by. I asked if he would be heckling me, he grinned and said he would. I then found out that he hadn’t eaten all day, so I thought more important to feed him before preaching. I went and bought him a meal, then I began to preach.

I preached on “Three Wrong Ways to Heaven” from John 14. As I preached a few people sat on the seats to listen; also, we met Christians who were extremely excited to hear the gospel proclaimed in public.

Towards the end of my message a heckler came up to my face telling me to go home as no one wanted to hear me. To my surprise Paul now began to heckle the heckler. Paul yelled out, “You go away, I like this preacher and I want to listen!” The man didn’t seem to know how to handle this so he walked away.

After the open-air I walked back over to Paul for another chat. He shook my hand and said he liked the preaching. He also took a Gospel of John and a copy of Ultimate Questions. At the start of the outreach he was opposed to us but by the end he was open. Please pray for him.

It was a joy to spend time with Matt and the team. They are doing a great job.