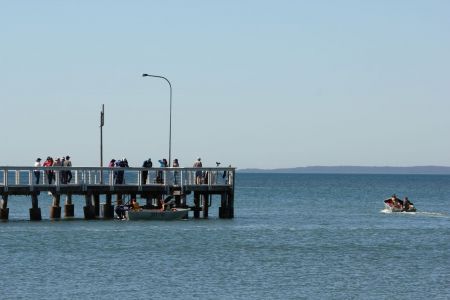 A lively start to our witnessing today: while the flip chart was being set up, Lee-Anne and Railee engaged two aging Hindu men in a chat. They alleged that the Christians, Jews, and Muslims were the cause of all the wars. They did take tracts though; praise the Lord.

Later in the afternoon, the ladies had a gospel presentation to three Muslim men. At the conclusion M. was going to add Jesus to his 'god list', B. was sticking with Allah, and M. the confessedly former truck thief received a Bible.

Paul had 2 good flip chart presentations. The last one was with John, a lawyer who was very attentive. He received a gospel of John.

Ryan had a chat with a younger and an older Buddhist. The latter was full of weak excuses  to not submit to the Lord Jesus Christ but Kip grasped the meaning and the offer (Please pray he gets discipled).

There was a young woman, S., who had come to mourn her first child, a still born. From a smattering of RI knowledge, she thought there was something after death. She parted, after letting me pray with her, with some gospel knowledge and a gospel of John. No wonder Jesus wept at His friend, Lazarus, death!

Another day experiencing God's enabling grace in witnessing. What a privilege to work with other Christians in the Great Commission work. Praise God for He alone is worthy to be praised.