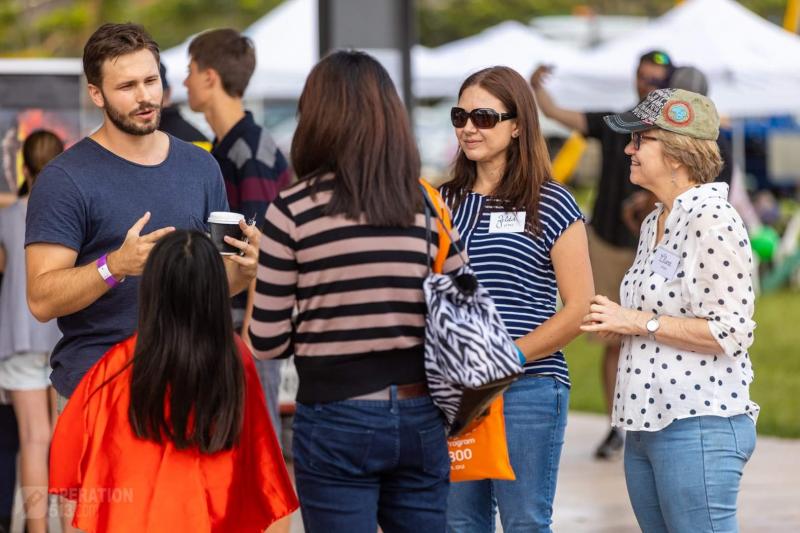 On Monday at Capalaba there were three team members out, surprisingly two of these were new to the Capalaba outreach, as other regulars weren't able to make it. It was exciting to see people taking the opportunity to come along simply because they had a chance. It is quite an interesting sight to see people who've only ever been to other locations come to see the differences at new locations. Capalaba is similar to roulette, most conversations are pretty straight forward, with people who are open, willing to listen and haven't really heard of Christ before but occasionally you get someone who is upset just because you wanted to ask them a question. The risk is worth it though because people's eternal salvation is more important than being treated respectfully.

There was an early conversation with a young lady named Mia. She said she had a Christian background and had grown up in the church but had left as she got older. She didn't have a specific reason for leaving but came to understand more about herself. Over the course of the conversation she saw her sinfulness and how her desire to live her own way had caused her to walk away from God. She came to realise that this way of living was the path to Hell and yet after comprehending God's offer of forgiveness, that can be received by faith in Christ, she remained adamant that at this point in her life she was going to continue living her own way. She was warned with the reality that she doesn't know if she will have another chance to consider it but Mia left, set on continuing to live as an enemy of the most powerful being in the universe.

There were then two conversations in a row with Amity and Jo, who both heard and came to understand the good news and were each encouraged to start reading John's gospel today!

There were quite a range of really exciting conversations but the highlight of the afternoon was with Justin. Justin had some slight understanding of the good news but struggled at first to understand it. After a quick recap though he came to understand why he deserves Hell and how he can get to Heaven and at the end of the conversation with great joy accepted a gospel of John and said he would read it. He professed a desire to trust in Christ this day and was challenged with the seriousness of the decision.

What a joy it is to be able to be there for the moment that someone comes to understand the simple message of salvation for the first time, and even better to be the one who God used to share it with them!

Why not come out some time?