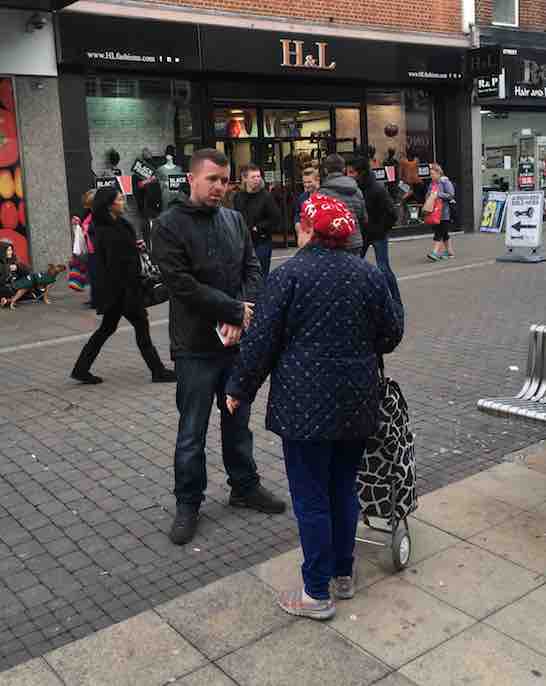 On Saturday 7th September Ed, Simon and myself met at the usual spot outside Debenhams at 2.15pm-4.15pm for outreach. We had all met a couple of weeks previously with Laura at my house to fellowship, pray and discuss plans for this year now the University students will be headed out for freshers week etc.

While setting up a young couple started to show some interest in the scripture signs and the intelligence test and we ended up chatting. Bill and Melinda were a couple age 18 and 21 and we ended up talking about Science that Melinda showed some good knowledge about after studying it at A level, the age of the earth, who created God and how morality came about according to their atheistic worldview. I tried to reason with them that they were not living according to their atheistic worldview in her arguments against God like why was there death in the world, why bad things happen to people and why people try to disprove Gods existence etc. This led to a great 15 minute chat about sin, judgment and the good news of the gospel. Bill was very interested in dinosaurs etc and where the Bible talked about them. They both took tracts and a Kent Hovind DVD Ed had made about the age of the earth which they said they would watch and was a great discussion.

While this had been going on, Ed had been chatting to a Homeless man who was a Christian that was sitting don outside McDonalds. He was very encouraged to see us there with Bibles etc and I later saw him that evening when helping with a Church soup run and we spoke more.

2 Mormons crossed our path (One American and one Chinese) and started to read the boards and had quite an in depth discussion with Simon about how they knew the book of Mormon was fom God compared to trusting in the Bible alone for their authority. I later came along to listen and we talked about believing in a different Jesus and therefore not being saved- another gospel, showing them Romans 8 v 9 that if they did not have the Spirit of God dwelling in them was not saved/ a Christian and the need to be born again. They also had some similar language and words to us and would call them selves Christians but we showed them their definitions of repentance and views on works in the book of James were different than what we believed. They left with some information to look at on Jeff Durbin/ Apologia radio and we encouraged them to watch and listen to the many videos on there witnessing to Mormons. They were both very amicable and will hopefully meet them again to share more.

I also had quite a lengthily conversation with a man called Max that I offered a tract to. He was a church goer with some interesting views about how someone becomes a Christian, what is was to be born again (He said it was when he was baptized) and chats about a Church he had recently stopped attending in Plymouth as there was a big split when a member of the congregation and worship leader were married in the church who were both women.

It was an encouraging day seeing as we had not been out for a few weeks due to various commitments over the summer, but was definitely refreshing to meet with unbelievers and have dialogue and for Gods word to be proclaimed on the streets again. We will be planning an outreach on alternate Friday evenings again once freshers week starts at the University which has always been positive.