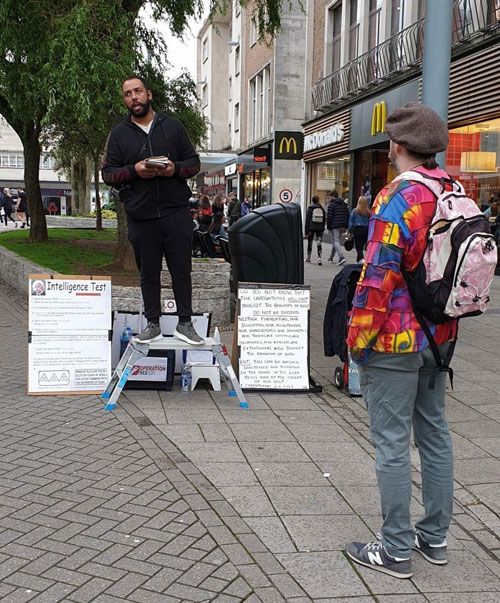 On Saturday 5th November, four of us met for Men's breakfast at Torpoint before praying and heading out onto the streets in pairs to try and hand out some tracts and start some conversations with some shoppers and dog walkers. John and I headed one way, and Archie and Ian the other.

John and I met a man called Jeff who was at the bus stop waiting to cross over the ferry into Plymouth. Jeff seemed quite a simple gentleman in his 60s and we had a conversation for about 15 minutes about his opinions of the afterlife and what happens when someone dies. He said he actually was looking forward to dying one day so he would go to heaven. We asked why God should let him in and he said he had different beliefs about Christianity but also some beliefs in meditation, and that other religions offered some spiritual guidance and had their own prophets who taught us different things about God.

Jeff was a really nice guy, and we talked about the 10 commandments, Jesus being the only way to Heaven etc, as well as why the other supposed prophets of God did not actually know how to have their sins forgiven like Mohammed and Gandhi, but that only Jesus through the cross could give us complete forgiveness and assurance and peace that we were right with God through him. He took some tracts to read on the bus on the way over and we prayed they would make sense to him and that God would open his eyes and reveal the true gospel to him.

Later in town I met up with Simon and we prayed for the rain to hold off and for divine encounters with people. While setting up 2 lads from launceston who had come up to do some shopping managed to go through the intelligence test, and we had a great conversation about spiritual things, with 2 more of their friends joining later on. They seemed very intrigued and listened and seemingly had not thought much about spiritual matters before, and gladly took some tracts and information to read.

A man had been listening in to our conversation, and I found out he was called Steve, who I believe was in his 50s, a skeptic but very nice and polite and congenial.He had received a Roman Catholic upbringing and was stuck on why other 'good' people from pother religions would not go to heaven, and how the bible is interpreted and misinterpreted. This led to quite a lengthily conversation about how we know the Bible wae have today has not been changed and is reliable and trustworthy, why the Christian gospel is the only way anyone can be saved as our righteousness before God is like filthy rags, and how we we need a perfect righteousness only Jesus can give to us. 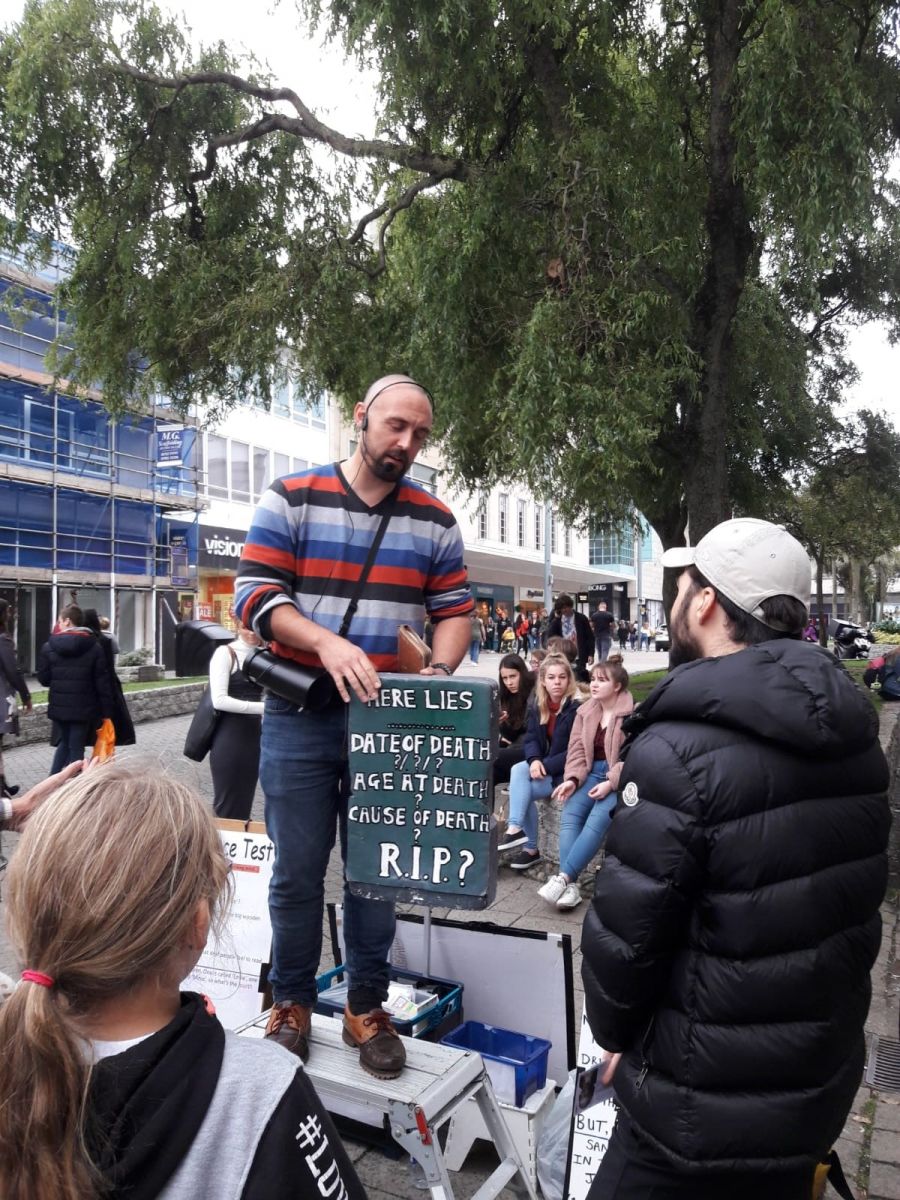 In his lifetime he had worked for some voluntary organisations and had actually met Mother Theresa, and he used her example of being good and so kindhearted as to why she would be in heaven. He was very shocked at the exclusivity of Jesus' demands in Matthew 7 and the narrow way etc, but was very lighthearted and jovial in the conversation which ended with him disagreeing but able to leave taking some tracts to read.Whilst this was going on, Simon managed to speak to various teenagers that had been walking past and looking at the intelligence test board, some of which attended he school where I work which. Simon gave them comic book good person tracts which led onto more conversations with them the following week which was good.

Simon and myself had quite a lengthily chat with two young lads who were in the Navy who said they were not religious, and had never really thought about God and the afterlife before. Tey stopped to talk when I offered them a million pound note and listened at length to our sharing the gospel with them, but kept saying they were not religious and so seemingly thought this would have no relevance to them just because they didn't believe it.

They too took some tracts and the final words they heard were that their beliefs don't matter, but what is true, and so if the Christian message is true, it would apply to them whether they believed it or not, and so needed to heed the gospel call to repent and believe before it was too late.

Simon had a lengthily conversation with a well dressed young woman called Emma who said she was a Jehovah's Witness. Simon spoke to her about the divinity of Christ, the need to understand the Holy Spirit's person and wok in the scriptures, not as taught by the New World Translation,  and why and how she needed to be born again. It lasted for around 20 minutes and she took some tracts from us to think about.

3 teenagers saw the sign about abortion and why a child in the womb should be protected and loved, not killed for convenience sak, and they were particularly shocked as to what abortion actually was and said they would definitely think about what they read. Ed came along after 2.30pm and we decided it was time to preach before the rain came.

I read on the news that morning that a double decker bus had overturned and crashed near Paington, leaving several people hurt and a major response from the emergency services needed, which made national news. I spoke of how the people on that bus could have been talking about what they were going to buy, where they were going , the weather ror sport, and could have been fit and healthy and attended the gym and had no knowledge of what was going to happen, but then suddenly in an instant their life changed, and how important it was for people to hear and respond to the gospel message before their life could be tragically cut short unexpectedly.

A few people started to gather around to respond, one man shouting and swearing, another man and his friend stopping to tell me that many other ancient writings were older than the Bible and that he was doing a better job of drawing a crowd than me, which inadvertently drew a crowd without me trying which was great as he was quite vocal and loud. 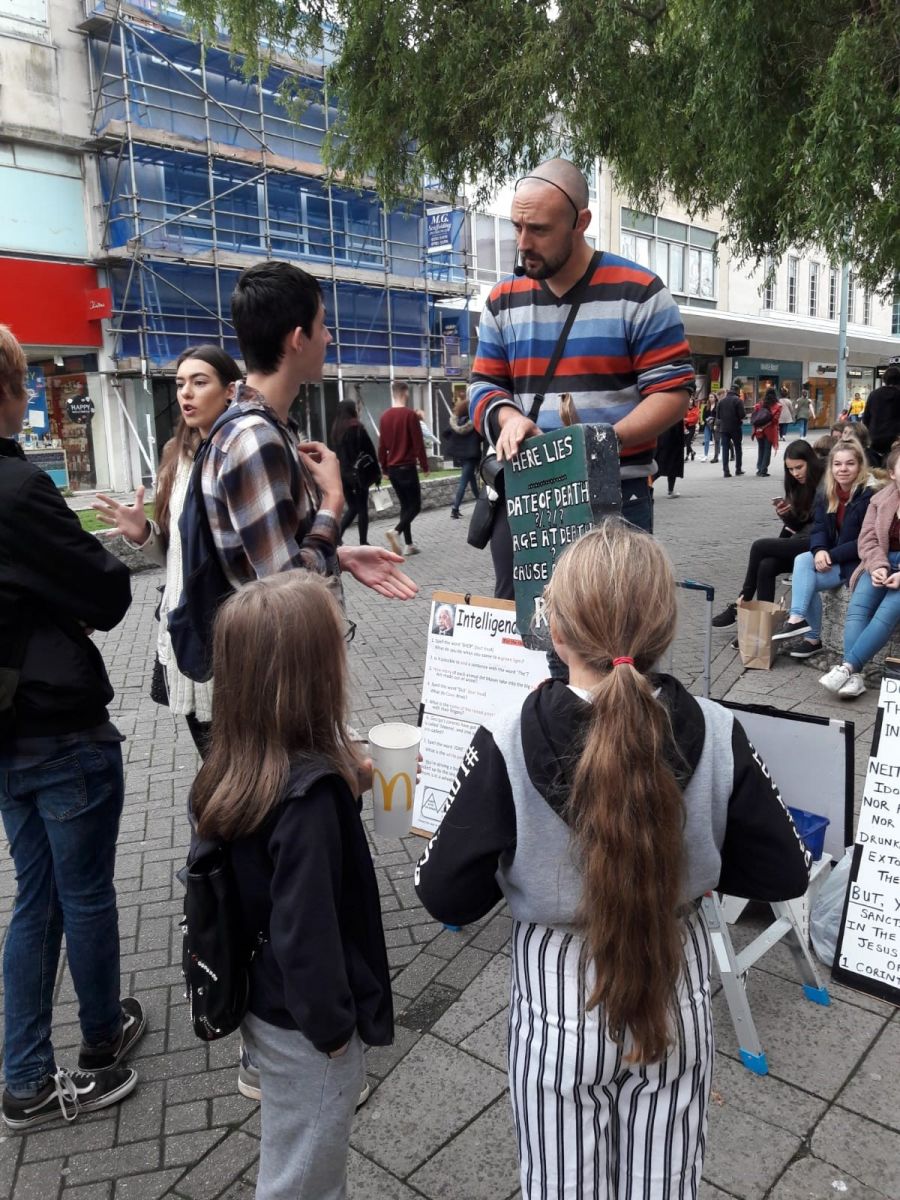 A man called Boran who was a Muslim (as seen in pic) asked some great questions about Jesus and Mohammed being the final prophet and why he followed what he taught, but I tried to show him from scripture why even Mohammed didn't know where he was going when he died, and that according to Islam Allah was not just a he would supposedly let people nto heaven who had done more good than bad, but would have to overlook their sin as their was no payment for it. I showed Boran that only the God of the Bible was just and merciful, and didn't let guilty people go unpunished, but took out His punishment on God the Son on the cross, so being just  and merciful- 2 Corinthians 5 v 21. Boran shook hands and said he understood and took some tracts which was good.

Some more people took offense at the scripture board 1 Corinthians 6 v 9-11, a young man who said he was gay and ginger guy were asking me questions on what I thought about homosexuality and was it wrong. I believed they were trying to test me and get me to say something they could use against me, and as the crowd increased felt quite under pressure and worried the Police may appear.

Thankfully God gave me the right words and right tone of voice to explain that their sexuality was not the main issue, and that God was angry at all sn, whether someone was straight or gay, and that even if they had just lied or stolen or blasphemed etc they would still be guilty, but that God set the standard of what was right for mankind with one man and woman for life. The young man took tracts but ripped them up, but I encouraged him to go to gotquestions.org and fullyfreefilms.com to read and watch some more information that may answer his questions. 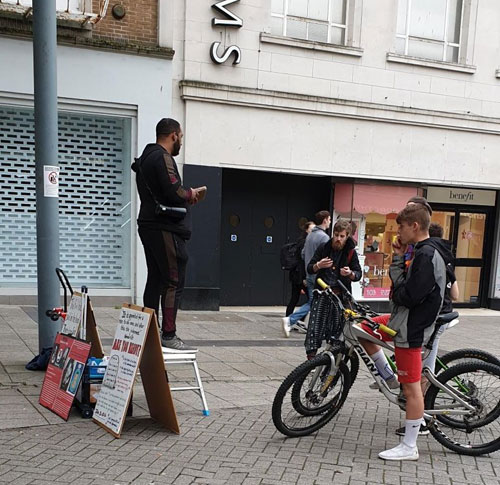 Simon and Ed spoke to a lady called Sophia who as passing that ha just finished work in the shopping mall, who said that one persons truth may not be someone else's truth, but that both could be right. I asked her if she believed in absolute truth etc which led to her acknowledging there was such a thing and it is not wrong to say someone is wrong and still be polite and civil. She too took some tracts to read and think about.  In total we were there for over four hours, and even when packing up to go home a group of teens kept asking questions and shouting out about who made God etc, but some took some tracts to read and cycled off.

It as an amazing day that totally blew us away with at one point around 25-30 people of different ages and backgrounds coming into listen to the different dialogue, including young primary school kids asking who made God, and a Christian lad asking where was the garden of Eden now which was very deep for someone only aged 13.

God really blessed us all and we were so encouraged and have a notebook to write down peoples names for us to pray for them so the gospel seed is not taken away but remains to grow and bear fruit.

Our next outreach will hopefully be in Exeter in 2 weeks time on 26th October 12-4pm.