On Thursday afternoon a team of six were out at Sunnybank. It was a usual afternoon with many short conversations. Some people came to grasp the good news and responded positively. Others heard it and there wasn't time to check if they remembered it. Some saw little snippets of God's existence and the law but most excitingly God and His sovereign will was on display.

There was a conversation that took place around 3:30 in the afternoon with a young lady named Kimeal. She said she regularly goes to a Catholic church each sunday and when asked what she thought the way to Heaven was in relation to the ten commandments. She said her church had been going through a series on the ten commandments and now she was learning what she must do in order to get to Heaven. It was all about works. She was shown the ten commandments and her guilt and her face started to look very worried as she realised she had totally failed God's law. Then her bus arrived. She tossed up whether to stay and chat but ended up leaving because she had to go.

The rest of the afternoon went by and a scattering of other conversations took place but after dinner as usual the team headed into Brisbane City. At around 8:30pm the renovation works in King George Square were so loud that the team migrated into the Queen St mall to have some conversations. There again were some exciting and encouraging conversations. But just after 9pm, on the return trip from the bathroom Kimeal was spotted walking towards the team. She realised who I was and then we proceeded to chat.

Over the course of the conversation she came to grasp the desperate position she is in before God, that if she died this day and God gave her justice she would be sent to Hell and therefore that she had only one hope, a full and free pardon, not that she could earn but that was given to her. Kimeal came to grasp the glorious gospel and with tears in her eyes and joy in her voice shared that she had never heard this before and was so excited that there was a solution!

She professed that from this moment onwards she would trust that Jesus has paid for her sin and that is the only reason she is going to Heaven! She took a gospel of John and was encouraged to read it and said she would get her hands on a proper Bible and reads Romans sometime. She was very greatful and thanked me. She noted that she didn't think this was an accident and God had clearly planned this double encounter.

Please be praying for Kimeal that she would start to see that problems in her Catholic church and instead start looking for a Church that will preach God's Word not man's ideas. Please also be praying that she would grow in her depth and understanding as she spends time in the word each day!

What an exciting day of outreach, may God receive the praise for all that He has done through unworthy servants! 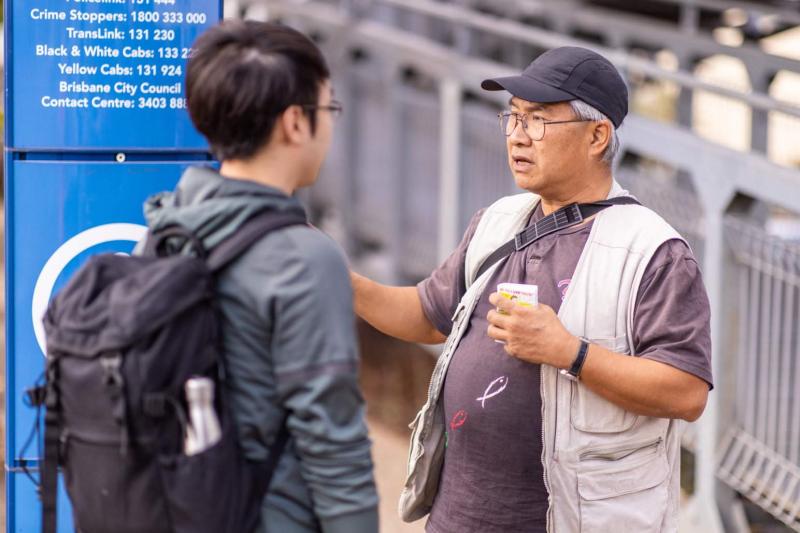