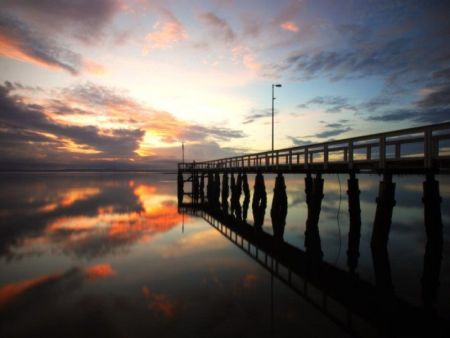 Twas a delightful Lord's day afternoon with a breeze wafting across Wellington Point as we embarked on the Lord's mission for a brief time.

Lee-Anne and Railee barely made it past the J.W.s 'bad news' stand, when they engaged Samuel, Connor and Jayden. They listened to the law and gospel and interacted in a manner that suggested that they may have had some background 'church' experience. Jayden needed and received a Bible.May our Lord bring His word to bear in their lives that the fruit of righteousness may result.

Later, a young Indian couple were offered a tract but produced a 'Law tract' that they had received earlier from another team member. They offered to return it but instead were challenged with their own goodness according to God's standard of righteousness. They showed no concern for their sins as their 'god' was different. They were given the court room analogy where the person charged with offenses tries to persuade the judge to let him go if he promises to do better from now on, The judge cannot let him go unpunished as long as his record of guilt stands. They were shown the need for Jesus to be their Substitute as only He is perfect, or absolutely righteous,  and only His death satisfies the demands of God's justice, 2 Cor 5:21.  They kept the tract. May they forsake their false god and receive God's salvation. God help them.

The latter part of our time was spent talking with 2 of the Maltese ladies we have befriended over the years. They got a bit excited when told they were bad (semi-Pelagian teaching). However we were able to show how they were good but not good enough to get to heaven. Did they hear savingly this time? God knows and He knows that we are unable to change their rebellion against Him

We give God the glory for He alone is worthy of all praise. Yes! we went home, a bit weary, but rejoicing.