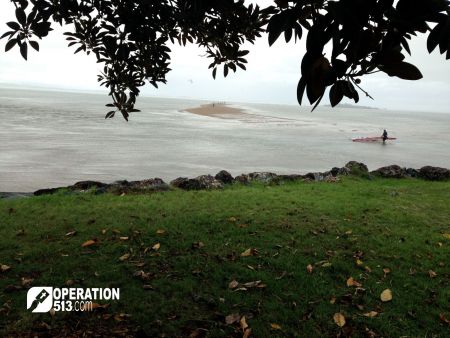 From 1 month ago - You who are alert will have noticed that I should have included another clause. I am sure you will agree that
Jesus  return will be far better than any present day service we may do.

There were not the usual number of tourists today and many God did not want us to converse with today. As always, God gave us the ones He wanted spoken to.

Fynn had 2 groups of his former school acquaintances passing by. The 3 young men had forgotten what they had heard at school earlier and were quite careless about it all. A larger group wanted to go through the flip chart. 2 of them appeared to be 'counting the cost' after a thorough chat.

- Fynn also took P., a young woman, through it all. She stated that she would get 'a round toit' So she was asked, "If you were offered $1000000 and told this condition: "When you die you will go to hell", would you accept the money? She got the point. Pray she receives God's only Saviour & Lord in saving faith.

Ryan was able to help a Dutch lady rightly divide justification and sanctification in her understanding.

He also had 3 children seem eager  to receive Jesus. It appeared from conversing with their  parents that they had a Pentecostal church background. The mother, E., had a shallow knowledge of the gospel and apparently did not teach their children at home. He would not engage with us. Sad!!!

I met my former J.W. door-knocker and his new co-worker (they sit in deck chairs?!?) . No apparent progress today but God works while we sleep.

To Him be the glory and praise. We went home thankful and rejoicing.