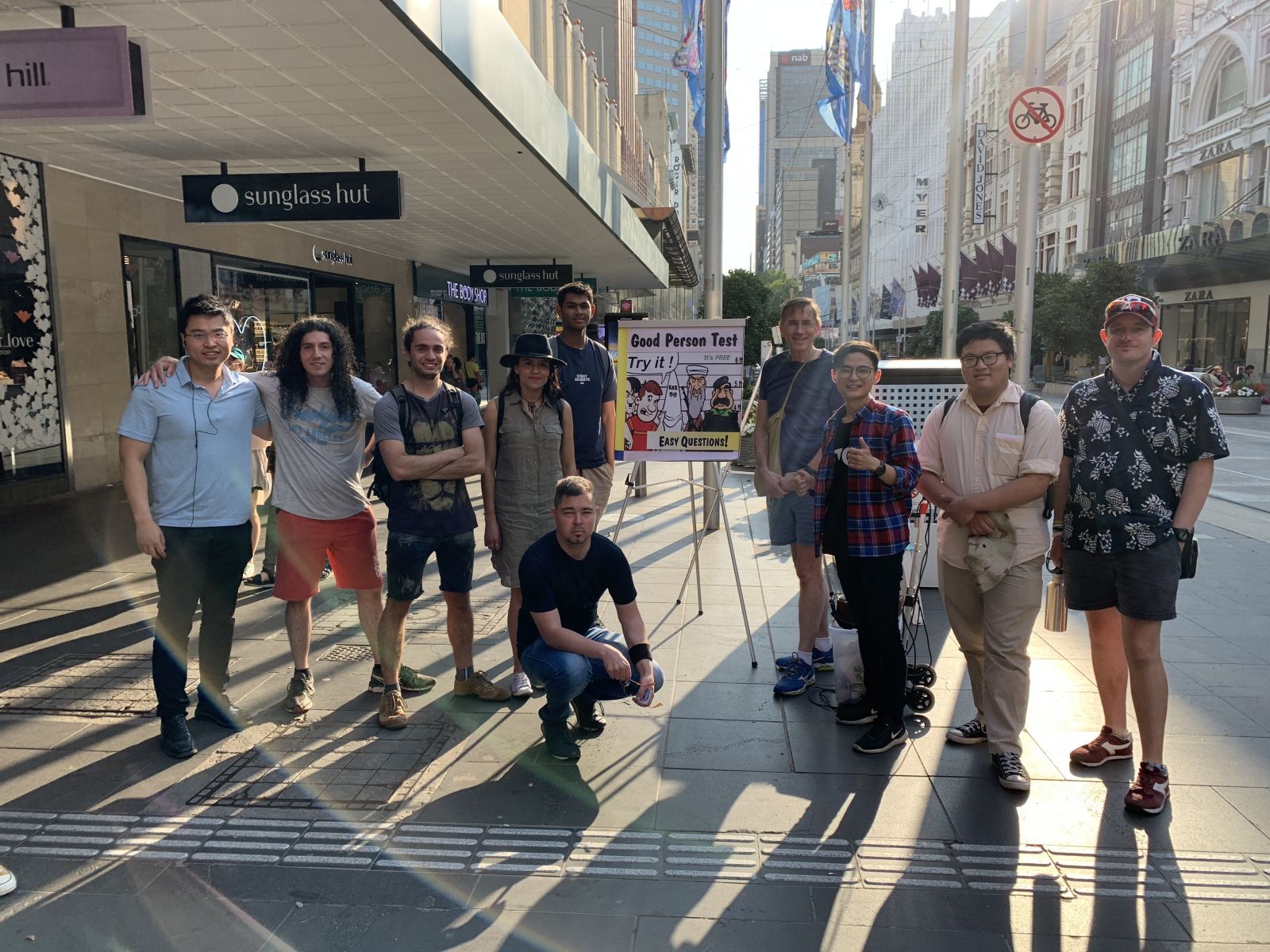 On Saturday, by God’s grace it was beautiful weather, we were quite excited , as we had 2 flip charts this week which means we can reach more non- believers effectively.

I met a person called ‘Chatts’, he was respectful and engaged well with ‘good person test’ Flip charts really well. As I was going through the law of God he started to smile as he realise that he was not a good person and when gospel was shared and displayed through the pictures, he grasped the gospel clearly and when I urge him to believe in this message, to my surprise Chatts say 'yeah.. I believe’ and I asked him again and he said again ‘Yeah, I believe’. It seemed genuine how Chatts told me he would believe that Jesus died and rose again for his sins. I strongly encourage him to go to bible believing church and grow in Christ. Please join us in prayer as you read this.. I pray that Chatts confession was genuine and he will go to biblical church and grow in Christ. 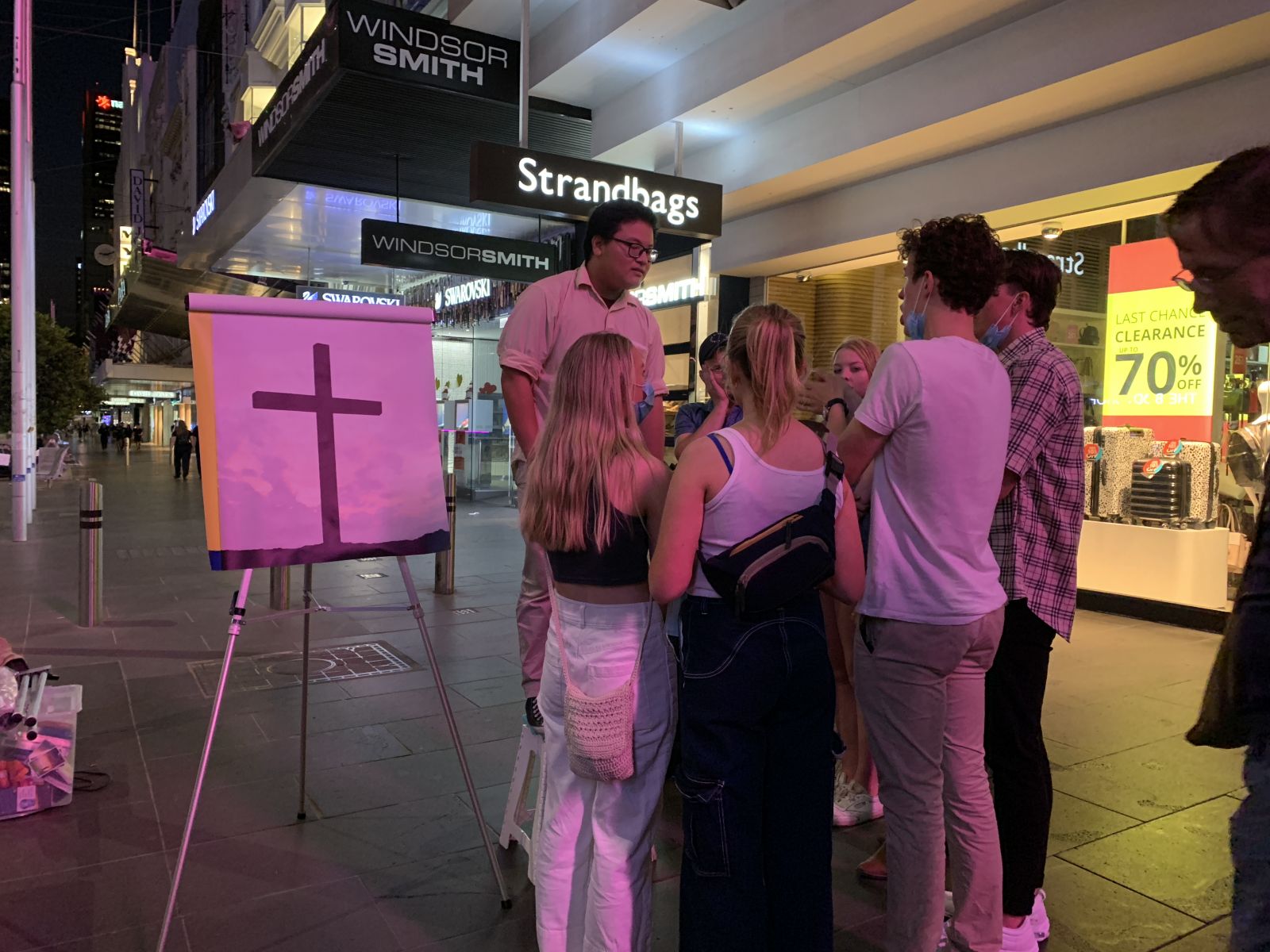 The Lord has greatly blessed this night’s evangelism, this highlight came at the end. I went over the flipchart with a crowd and afterwards, a fellow in the crowd, a young man called Will, was very intellectual in challenging the biblical worldview, to which I responded. This gathered a larger group into the mix, this provided ample opportunity, as I was preaching and responding to his objections, to also lead his objections and my response to the Gospel. The crowd was very hostile during the entire alteration, at the end, I finished with the Gospel that all have sinned but Christ died and paid for the fines of sinners on the cross. At the end, after some short conversations, we had to leave and as Will and his friends were walking away, I called out his name and asked him if he understood what I said, the message that was proclaimed, he was very much hostile to it and answered with “I don’t believe it”, which provoked me to ask again “that was not the question, did you understand it?”, to which he replied “yes”. This was greatly edifying in that though he was extremely aggressive to the message, confirming 1 Cor 1:18, he understood the cross. Please pray for Will and his friends that God may change their hearts and save them. 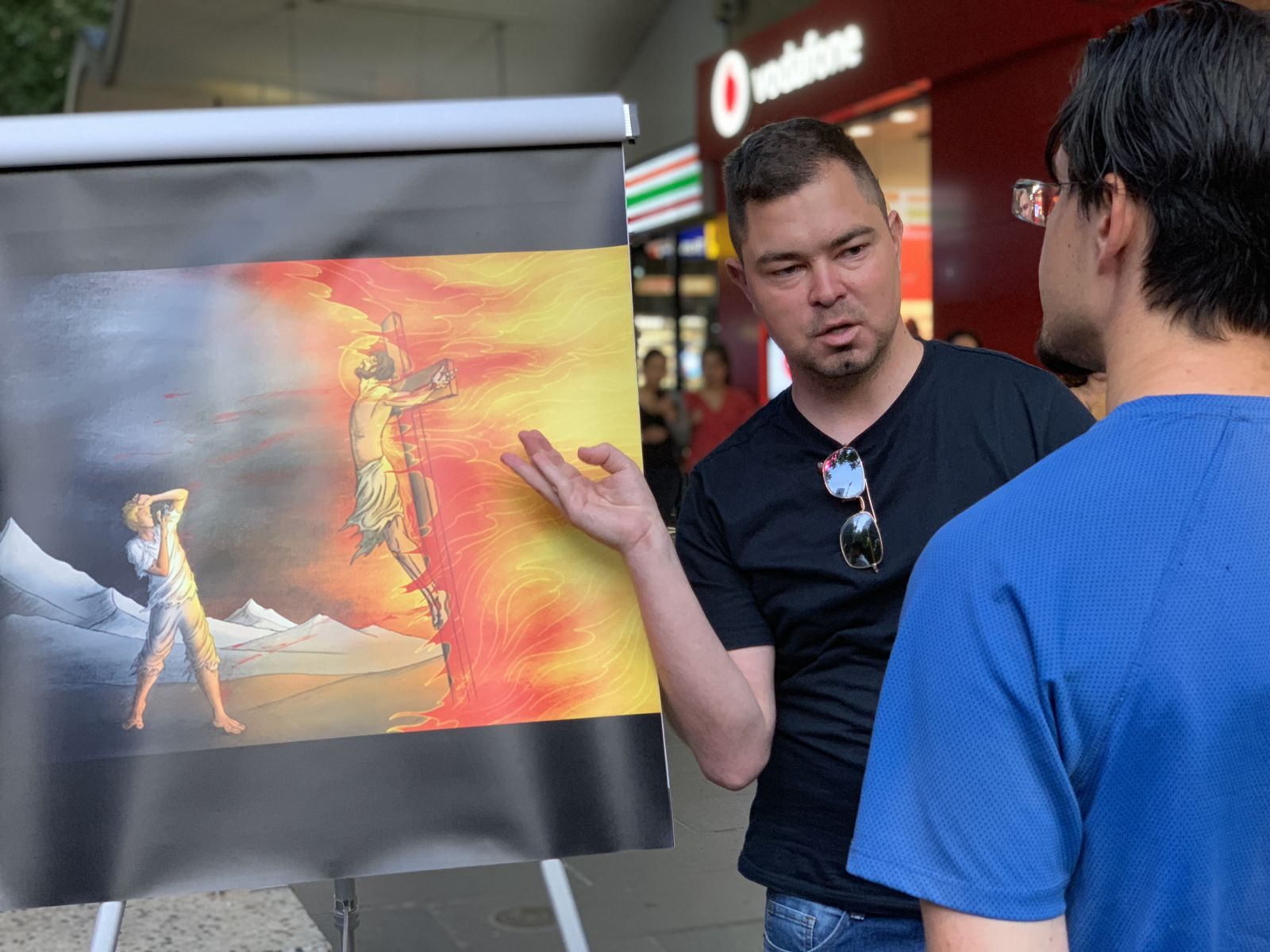 I had a chat with these two couples about whether they were interested in taking the good person test on the chart, they seemed hesitant. I asked them if they were interested in taking a Gospel tract and they took it. So I asked them if they thought they were good enough to heaven, they both replied yes. I went through the Law with them asking them if they have stolen, lied and lusted before, they both replied yes to all three. I told them that means they are guilty before God and they fail to meet the required standard for heaven which is perfection, all have sinned and fallen short of God's glory (Rom 3:23).  I told them that's the bad news, the good news is the Gospel that Christ died on the cross for them, God crushed His Son in their place (Isaiah 53) and Christ took their place because He loves them. Both God's love and wrath was seen at the cross. So I told them their sin was put on to Christ and if they truly believe Christ's perfect cloak will be given to them by faith so that they go to heaven by what Christ has done not them. I  commanded them to repent of sin and put their trust in Christ alone, they left after that, please pray for the couple for God to save them. 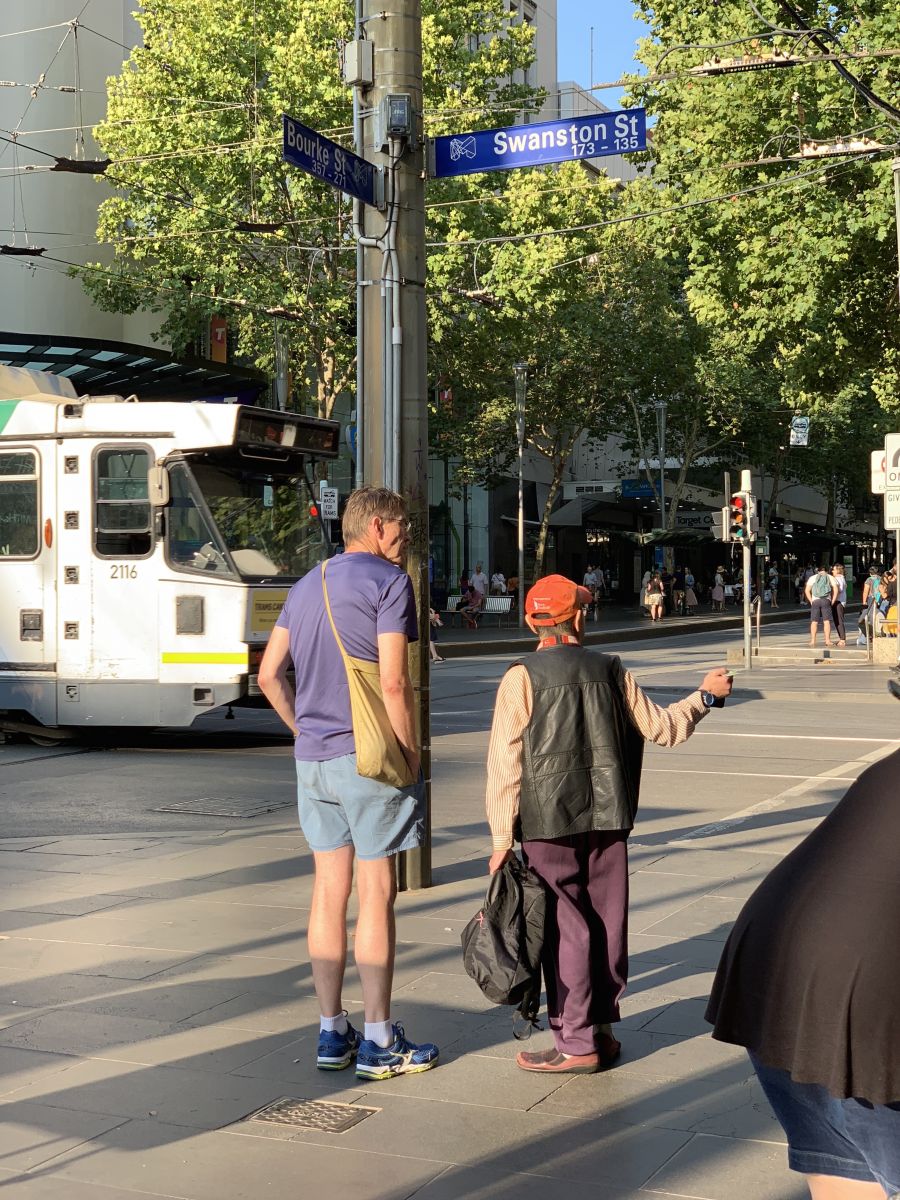 I spoke to a Zwinglian Calvinist for awhile, and at one point had to ask why he considers himself a Christian; he gave a good answer and is a mature Christian. I spoke to a Roman Catholic lady and had to compel her to focus her attention for salvation on the work of Jesus alone and not pay heed to Mary. I spoke with a new student from Saudi Arabia, who was listening to Hui's presentation. He is here to study English and logistics. He appeared to a be secular Muslim. I tried to explain as best I could the cross of Christ, and left him with a pamphlet. He is open, but probably needs to hear the Gospel again and in more detail. I supported Hui by speaking with some of the listeners to the flipchart presentation. Pray for those that heard the Gospel, in different ways, that the Lord will grant them repentance and saving faith. 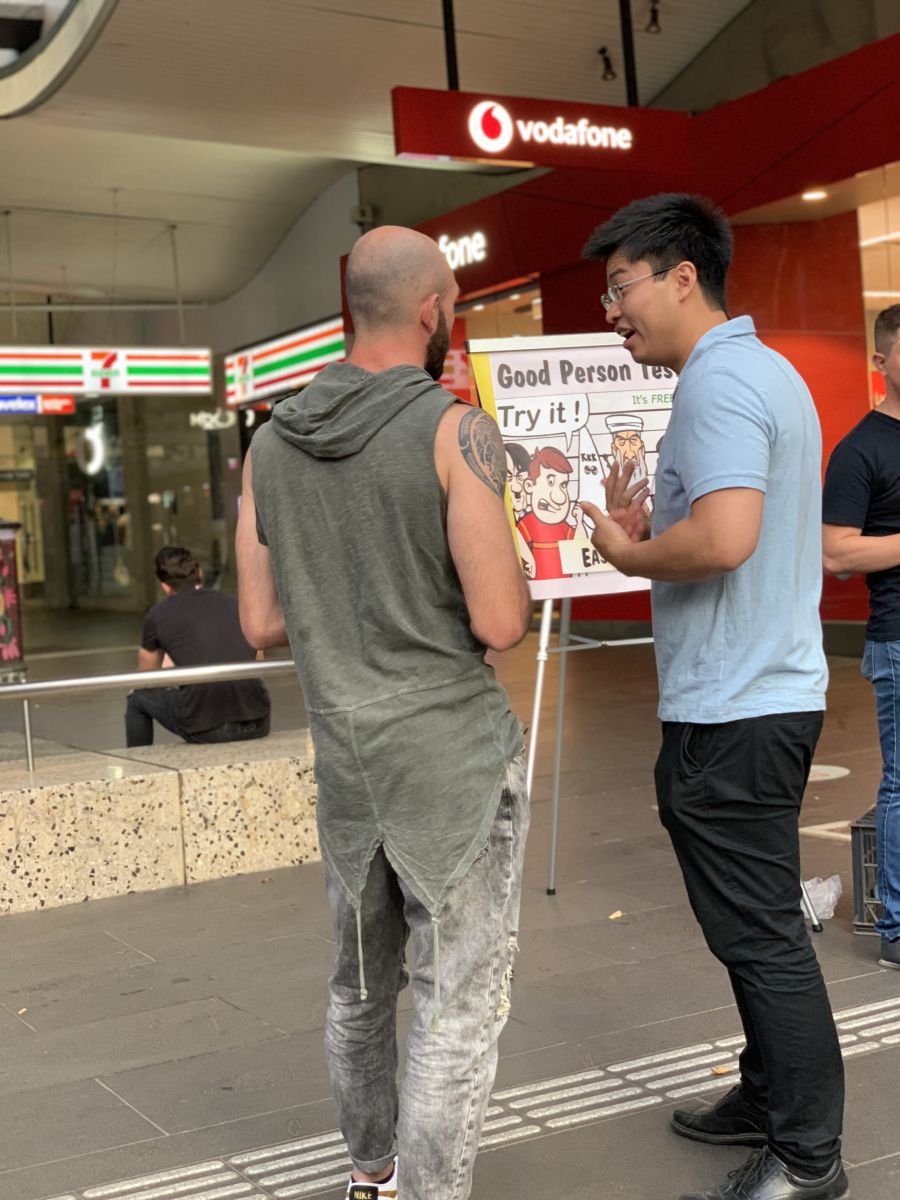 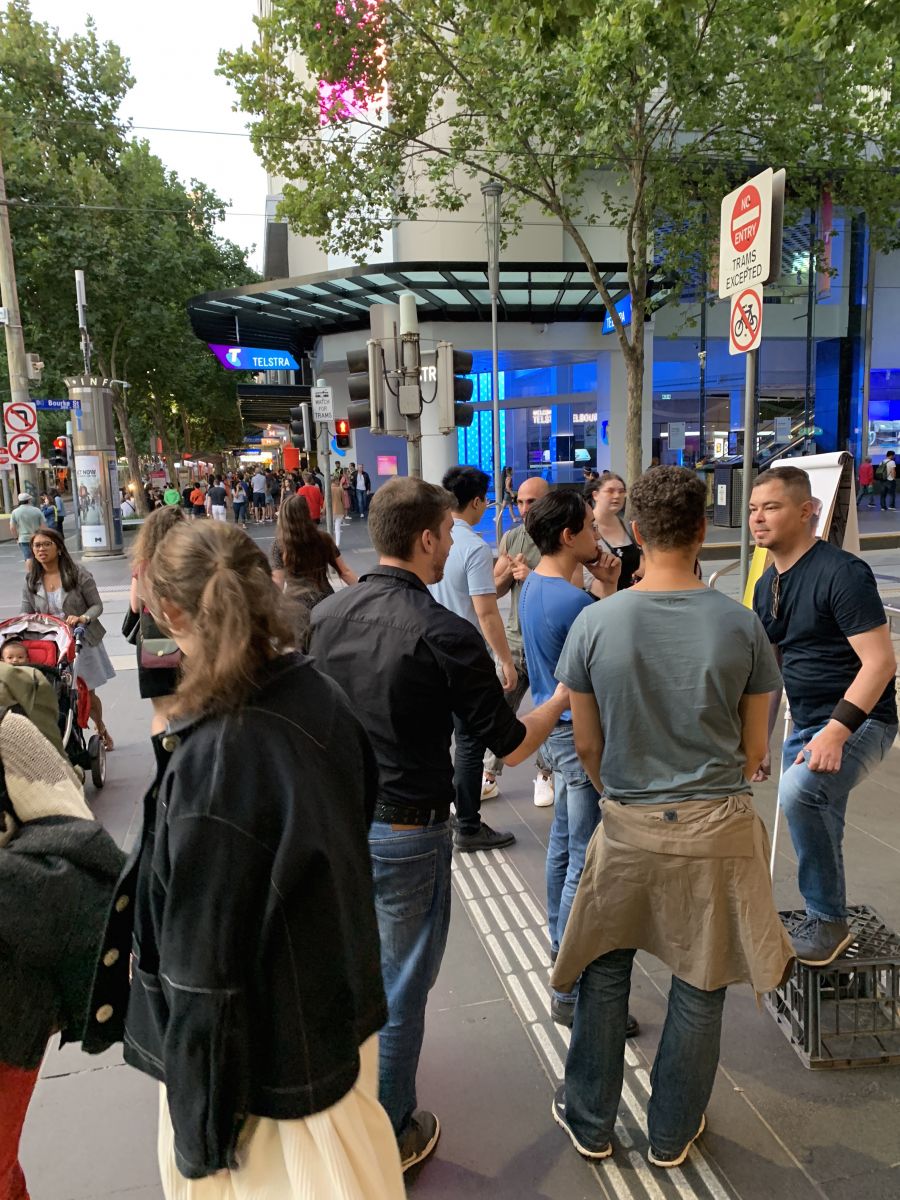