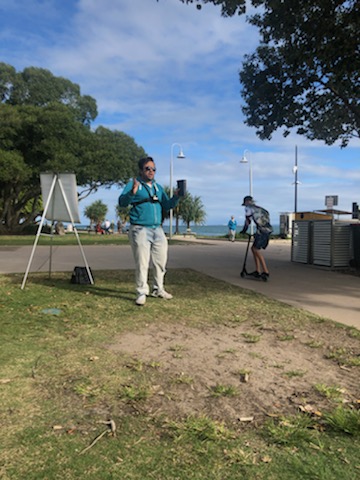 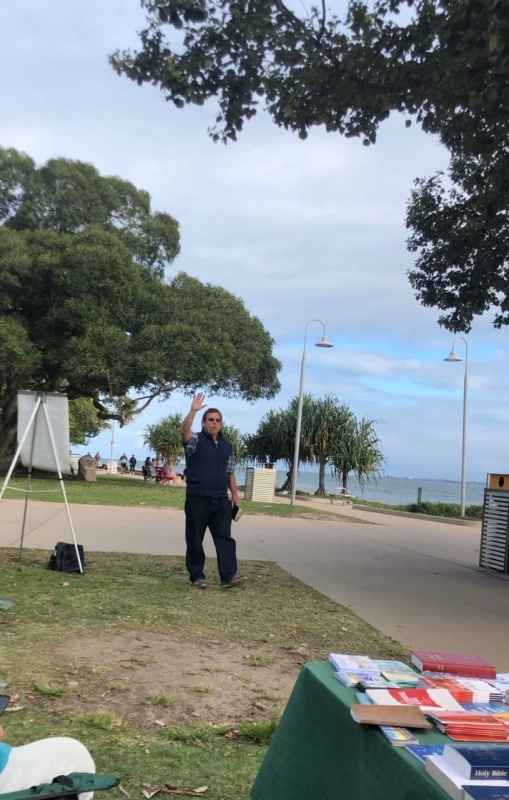 On Saturday the team was happy to be back at Bribie Island after a long break.  We met at the Bongaree Jetty for a time of discussions, distributing tracts, and for some, street preaching.  A combination of cold and corona meant that the area was pretty quiet.  Although there was much rejection and hardness amongst those who had braved the beach, a number of tracts were given out and letter boxed, the Gospel was preached, and the good news proclaimed.

When one of the men was preaching the Gospel, a woman began shouting angry verbal abuse, which we expect, knowing that God’s Word is offensive to some unbelievers.  She left to call the police, but God gave us opportunity to continue until our appointed 4pm without any police interference.  Please pray that the message she heard would sink in and turn her life around for the glory of God.

Sam and Lewis, two young men, also heard the Gospel.  They had been listening at a distance to the preaching from the sidewalk, but as they were walking away, they bumped into another team member and stopped to talk.  Sam was an atheist, Lewis completely unconcerned, but both stayed to listen, while others of their group wandered off to find a table.  Sam in particular listened carefully and asked logical questions.  He said that he didn’t want to “do good things just to get to heaven.”  The Gospel was explained, and while Lewis kept checking his watch and eyeing the rest of the group, Sam seemed to understand what was being said.  Both of them took tracts when they left, as well as Gospels of John.  “This is not a chance meeting,” they were told.  May God do a work in their hearts.

Near the end of our time there, a family approached the literature table.  The three little children helped themselves to some of the Gospel literature, and they took the book of John for “Nanna" to read to them.  Both the parents and grandparents seemed very friendly and open which was an encouragement for us.  We must now pray that the Word of God works on their hearts and brings fruit to their lives.

Please pray for a softening of hearts in our local area.  Pray that those who received the Gospel would ponder over it and be brought to faith by the grace of God.  May God do a great work here at Bribie Island.