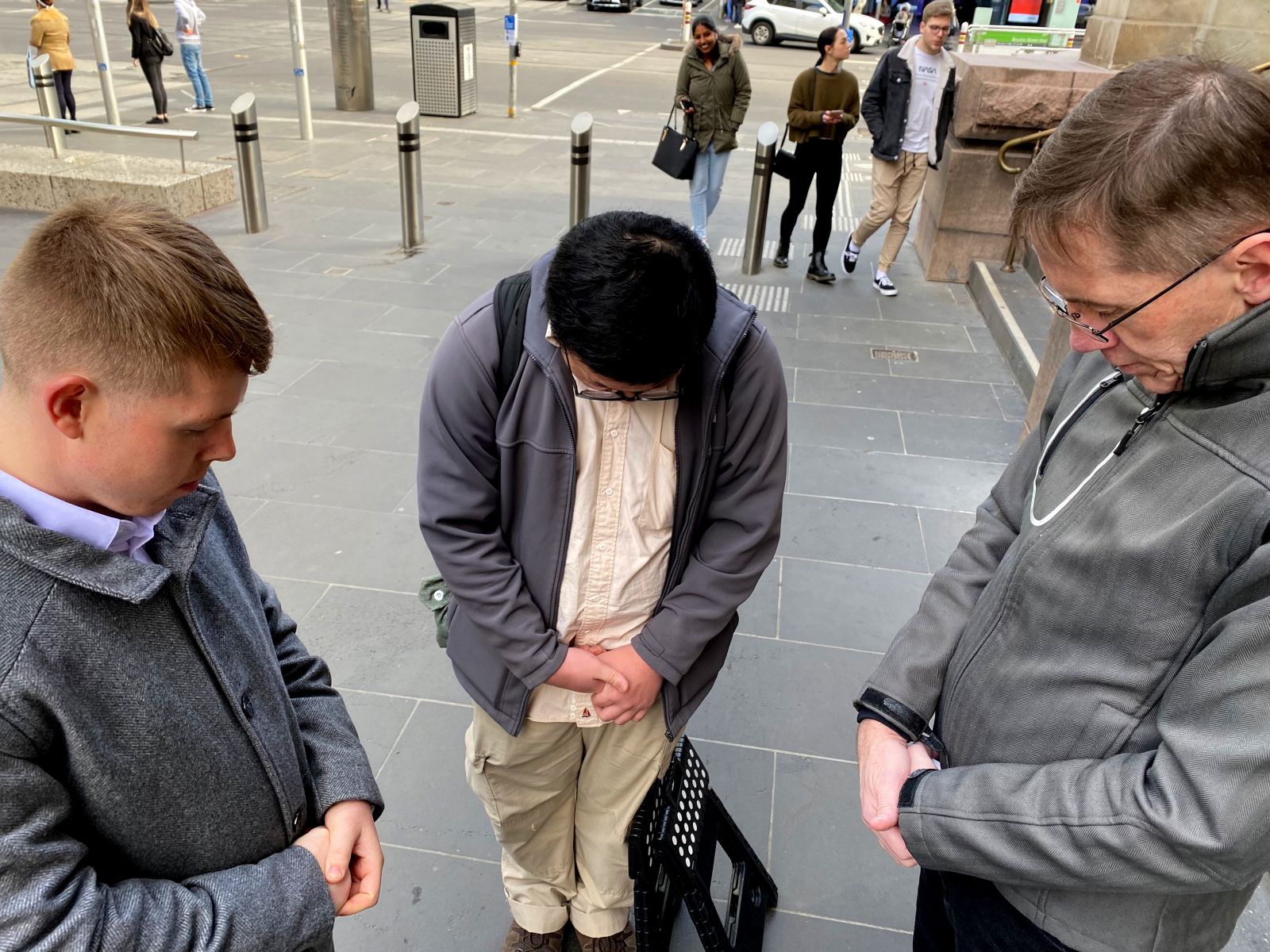 On Saturday, God has faithfully sent 6 labourers. I am always greatly encouraged by these brothers who have great zeal and passion for the gospel. I praise God for sending faithful labourers for His glory and for lost souls. As Victoria's restrictions have become stricter, we have decided to buy whiteboard and write 1.5m social distancing.

As usual, we have set up 2 flip chart and one table with gospel tracts. By God's grace we had plenty of good encounters and a person who said he will believe in Jesus Christ.

I encounter couple who graciously gave me chance to do the good persons test with them and as I began to ask them questions, people around them started to show interest and one lady was listening to the chat so I asked her if she wants to join and she said "Okay, you got me" and smiled. I asked ten commandments and as I brought up about how we deserve h*** as God's standard is perfection for us to be innocent and suddenly the lady that joined good person test as she finded interesting in the beginning said "you lost me there" and walked away (please pray for this lady) but other people stayed and I could share the gospel about Jesus being only perfect person, truly man and truly God that became sin for us, died on the cross and rose again from the death so that whoever believes in Jesus Christ will not perish and go to h*** but have forever life. 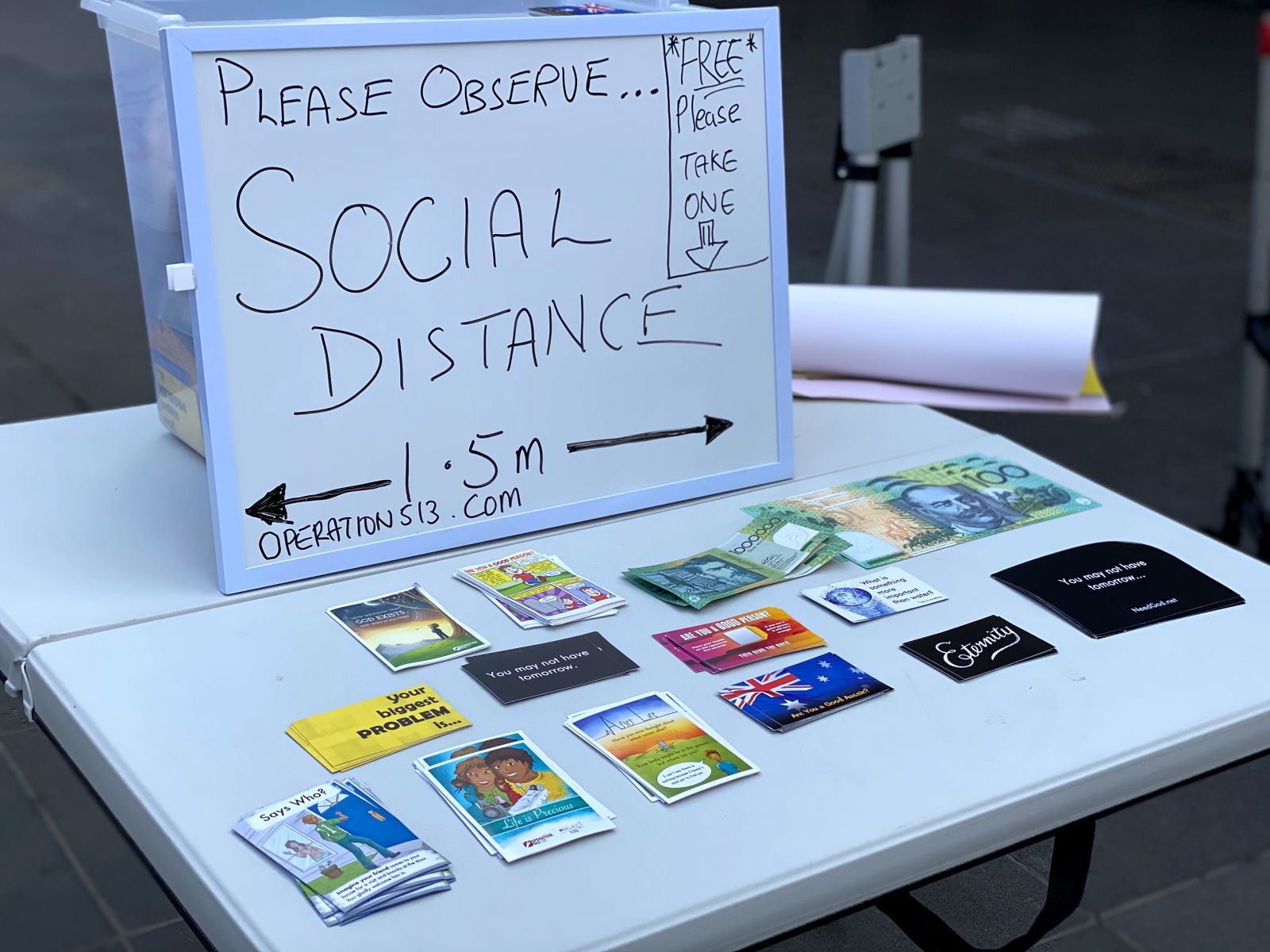 In the middle of the chat one guy questioned the authority of the scripture and I could see that he was not asking that question to heckle me or make fun of Christianity rather with real curiosity so I have explained about the large number of manuscripts of old and new testament and coherency of scripture. I finished the conversation by pleading them to believe as if they die in their sin they will go to h*** and that there is possibility of dying today. please pray with us as you read this report

I met a guy (I just cannot remember his name..) as I shared the good news of Jesus Christ, by God's amazing grace he said that he wants to believe now that Jesus Christ died and rose again. Praise God for this and I pray that what he said was genuine. I gave him the gospel tract and explained importance of being part of local church.

We did some flip chart ministry in Burke St Mall and Swanston Street. We set up 2 flip charts on opposite corners. A lot of people presented and many great opportunities for the team. A couple of interesting conversations I had are as follows...

A Greek man who said he was Greek Orthodox. We spoke for some time about the good person chart which he went through with me and failed on each question. However he stated that being good was acceptable and that he was always good enough and hardly ever broke any of the 10 commandment we had just looked at. He didn’t need Jesus to die for him because he was “good enough” with his own merits. He agreed that Jesus died for all the bad people but wouldn’t accept that he was one of them. He wouldn’t listen to reason and went away quite sad. 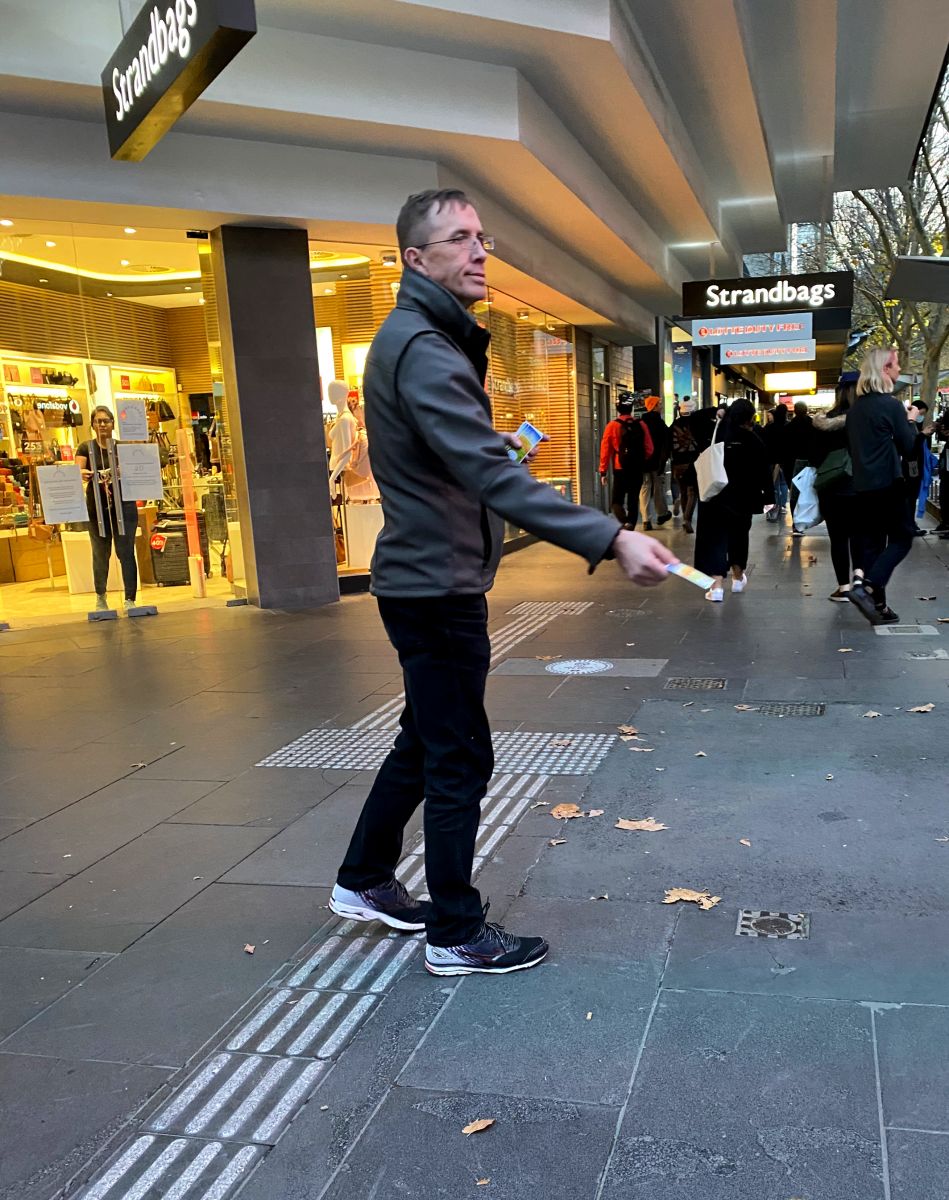 A woman named Helen came at me saying she was enjoying heaven here on earth. This sounded strange, especially during this Covid 19 pandemic, so I asked her what she meant. She explained that Jesus was already here and we were going through the New Millennium now and everything was peace and fulfilment in this wonderful new and heavenly kingdom. I was I intrigued as to what caused her to think in this way at this difficult time and with what authority. She stated that the new millennium began in 60AD and we are still in it. I explained how it’s nearly 2 thousand years since then so it can’t be the same millennium but she insisted that it didn’t mean a thousand years literally and the peace wasn’t literal and neither was anything else. It all depended on what one saw with their heart’s eyes. I told her she needs to read her Bible a lot more and ask for God’s Spirit of discernment and she will discover the difference between the spiritual and material world and that the Lord would reveal himself through His Holy Spirit in wisdom and truth. She said she never reads the Bible literally and wasn’t interested in its “so-called” truth. On this I said I differed from her and so she headed off. There were a few other conversations but these were two of the interesting ones.

The evangelism on the 27th of Saturday proved not as fiery and intense as the last but still quite blessed. Though last weeks’ evangelism has many listeners and aggressive crowds, this week the Lord has provided many who listened. The first encounter was with a young Jewish lady, she was very resistant to the Gospel, she objected at every point to the preaching of the forgiveness of Christ, and His abundant grace. She referred much to the past wrongdoings people have done to her, in which she demanded that they be punished. I stated that they will be punished by God, for God is just, but that God will not only punish those heinous crimes, but also lying, stealing...etc… I referred to her the story of Corrie Ten Boom, how after ww2, she found her former persecutor, who has found Christ and thus, forgiveness and forgave him. I told her that the point was that if the blood of Christ can cleanse even the sins of Nazis and murderers and thieves, then it can wash away the vilest of sinners. During this, though she was very resistant, a small gathering still took place, where as 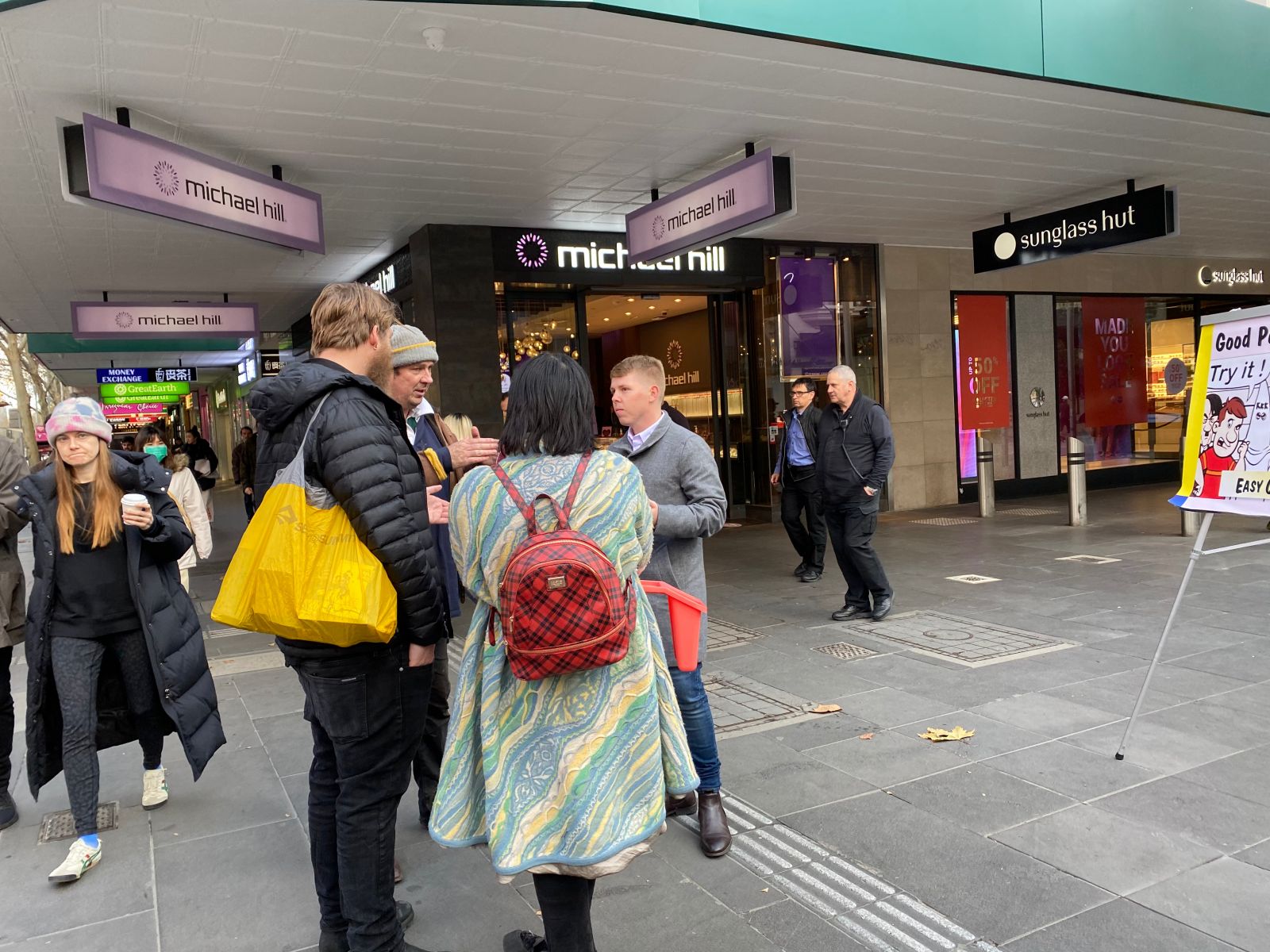 I observed several onlookers had chimed in where I could see their facial expressions as I preached Christ’s blood being able to wash away the guilty stains of guilty people. I observed one lady who was listening nodded her head and smiled slightly, I know not if she was Christian but only do hope that she had realized the depth of His atonement.

Another encounter that impressed upon my memory was that pertaining to a couple who walked passed us, who stayed to go through the test. I asked them, after taking them through the law “if God is good and you and I are not, where should God send us, heaven or h***?”. To my amazement, I watched as his face turned slightly, indicating a sense of worry or confusion as he replied “I want to go to heaven” I stated “I know you do, but the objective reality still remains, where will God send you? Of course, if God is just, then He should send guilty people to h***”. As I took them through the atonement, that Christ died for sinners and satisfied the wrath of God so that God can forgive and still be just, I watched as the lady slightly lid up her eyes. I remembered that she was wearing a facemask, but I need not see her entire face, only her eyes as they lit up when I told her that the extent of Christ’s death. She said that she was Christian but never really understood what it was all about, even now as I write this, I still do not know if she was Christian, but only pray that the Lord uses this according to His good pleasure, that if she is Christian and never understood the basis of the Gospel, she would now understand and grow in Christ, if she was never a Christian that the Lord convicts her, now that she knows the Gospel, unto salvation. I pray the man would also be regenerated and be saved. I pleaded them to turn to Him and be saved, they took the tracts at the end and went on their way.

The last encounter that impressed greatly on my heart was that of another lady, she wen 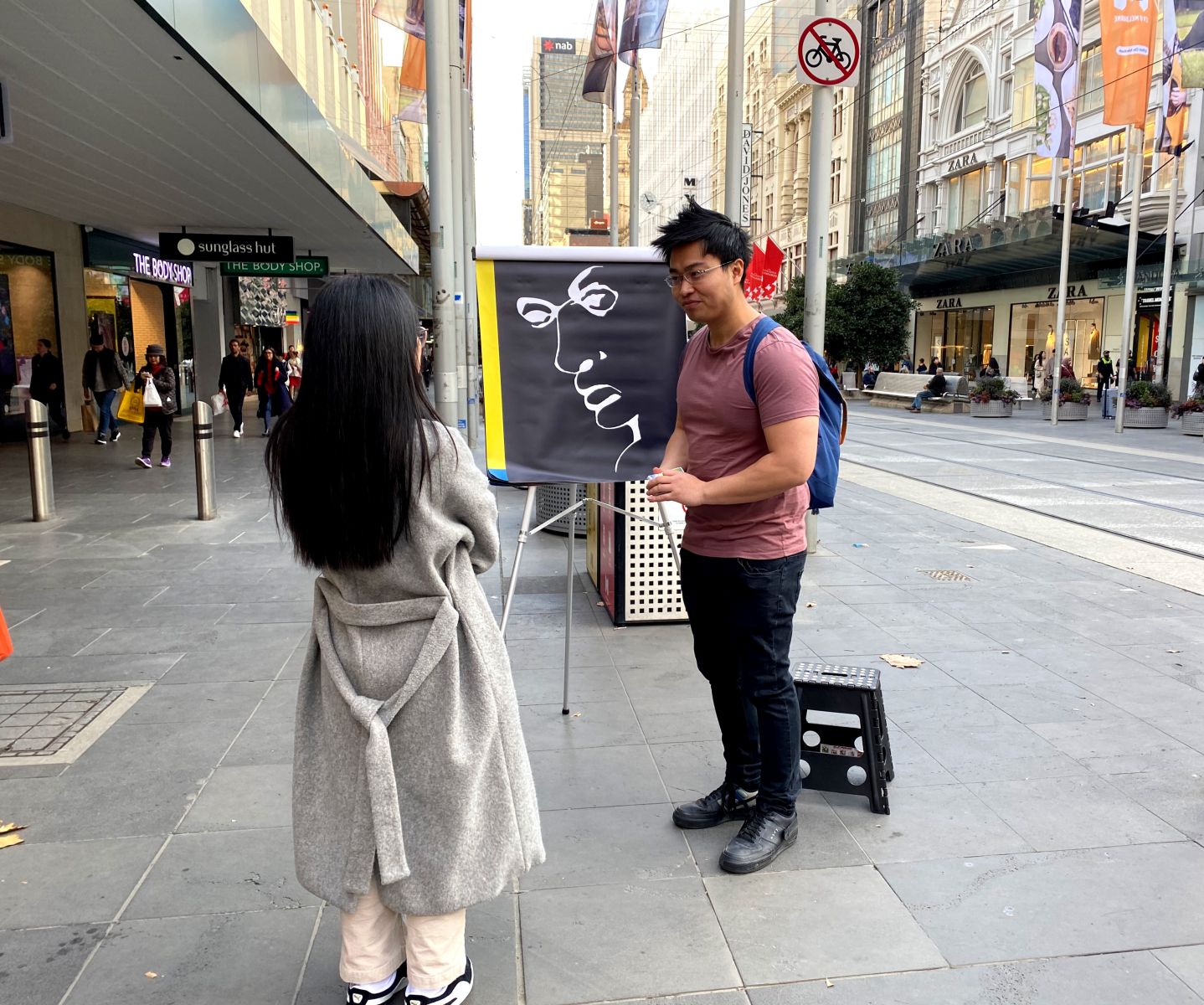 t with what appeared to be either her friend or sister, she appeared to be Vietnamese, but I took her through the Gospel in English. The law was taken through, and when the tensioned question arose “how can God forgive and not compromise His justice?” her faced was once again lit up with confusion and a sense in which I could tell that she was thinking, that she did not just sit idly by to hear the presentation, but she actually thought about it. She said that she didn’t know how God could forgive and still be just. As I took her through the Gospel, as the way in which God satisfied His own justice, her eyes once again lit up, she was also wearing a mask, but her eyes lit up as she knows how God could forgive and still be just. I will pray that this would not go in vain, that the Holy Spirit would work her heart unto salvation. I called her to repentance and accept the free gift of forgiveness and everlasting life by faith in Jesus Christ. 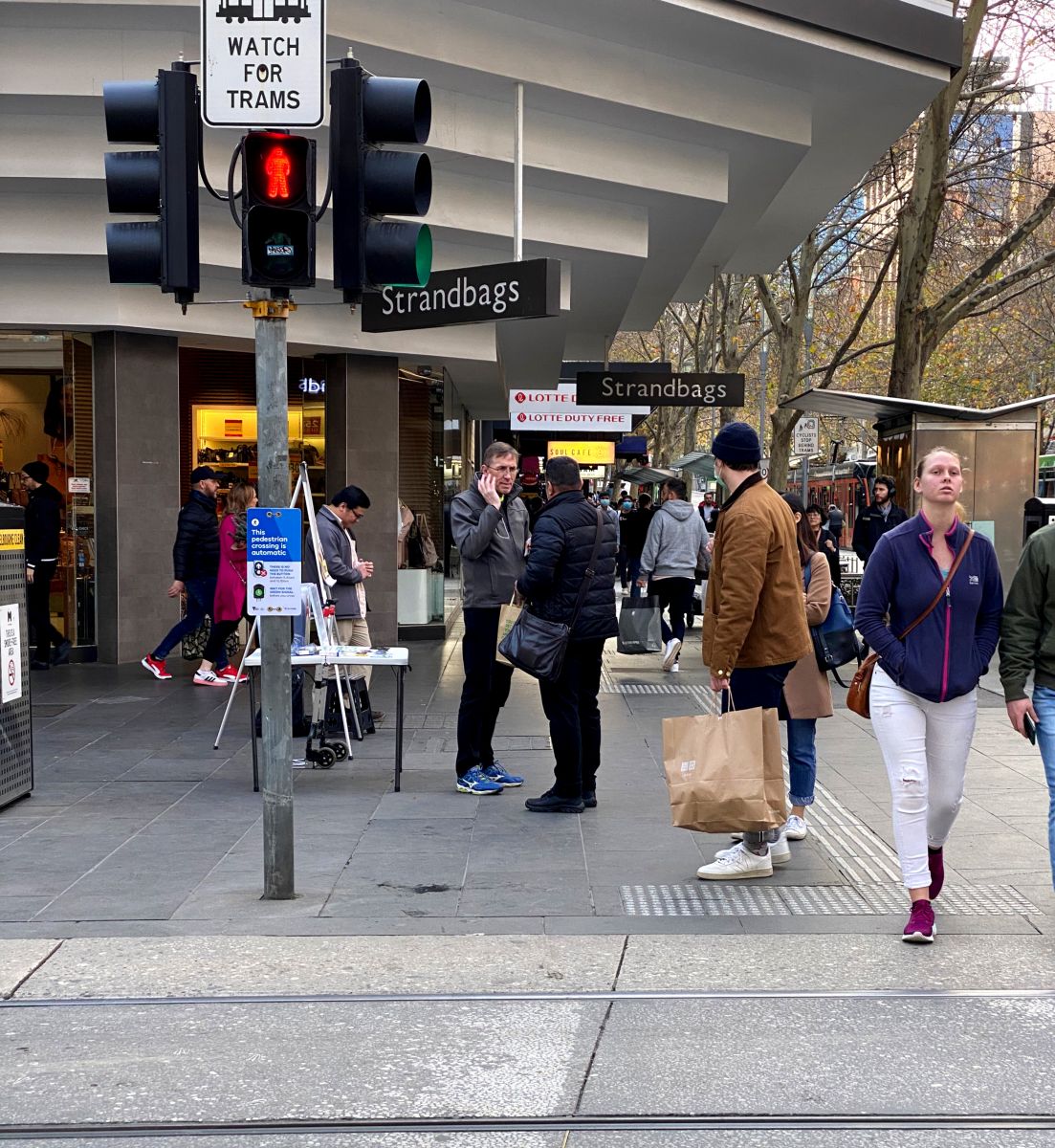