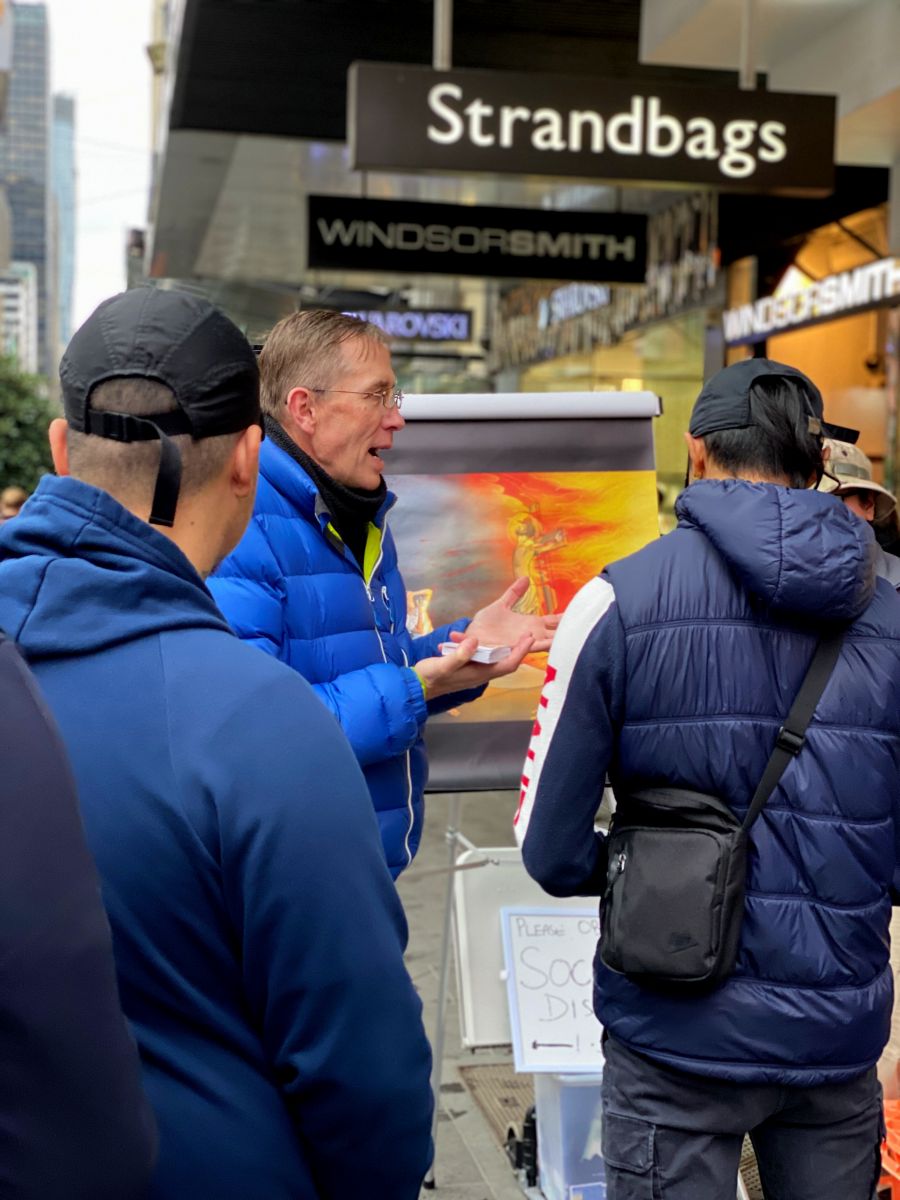 On Saturday, the weather forecast reported that there is high chance of rain fall so we have initially decided to do 1 on 1 evangelism but as I was spending time in Starbucks I started to see sunlight in the city instead of thick dark cloud. So, I decided to bring the big flip chart, praise God although there was bit of drizzling we had wonderful chats with many people with different thoughts and background.

Before we started I had privilege to share a quote in the new book called PROVIDENCE by John Piper, John Piper said "The providence of God is His purposeful sovereignty by which He will be completely successful in the achievement of hIs ultimate goal of the universe". We were greatly encouraged by reminding ourselves of GOD'S providence as God is the one who faithfully works through this unworthy vessels.

By God's grace, I had numerous interesting encounters. I met a person who was slightly drunk who claimed Himself to be catholic but when his wretchedness were exposed in the light of the law of God he started to get little angry and upset. He started to defend himself that he is not that bad person still so I had to share the gospel with him that Jesus Christ died and rose again for guilty sinners like us because we are NOT good and we are hell deserving people. I pray that when he is sober he will realise his hopeless state in his sin but at the same time see the glorious hope that is in Jesus Christ !

This evangelism showed much grace and providence by the Lord. As the flip chart was set up, we were there for about 20-40 minutes before it started to drizzle. Brother Martin packed up the tables to prevent the tracts from being wet, we actually thought about packing up the flip chart as well, but refrained from it. This was until the man from the evangelism on the 20th of June showed up to interrupt what we were doing. I addressed him accordingly but I had not wanted a big crowd, I rather just addressed him on a personal one to one basis, yet that proved not to be the plan of God. That as I addressed him, even on a one to one basis, people actually stood by to listen to the conversation and eventually the bubble bursted, he got so angry that he grabbed his backpack and pulled out a little megaphone to speak over me.

I saw this and the Lord placed within my mind a godly quickness to immediately seize the opportunity to get up on the soap box and address him. This drew a relatively large crowd, I recall around 10-20 people, but I have to recount if there is a photo. Now the weather was gloomy, it had drizzled, yet people still stood to watch, I praise God because it appeared that we were not in a favorable spot, as gloomy weather is a deterrent, but the Lord had mercy, in His providence He guides us and helps us and provided. I addressed the man, each response with the Gospel of course, until he had to go out for a nicotine hit. I looked and saw a large crowd just standing around, so I just preached to them that they have sinned yet Jesus died for sinners, to save them. This was a huge opening and was seized and the Gospel was preached with great ampleness.

During this, several members of the crowd also asked me “have you also lied, and stolen...etc…” I said “absolutely, yes, I don’t deny that at all”, they said “then why did you tell us this?” I said to them that I go there to tell them of the fact that I’m no different than them, I myself have lied, stolen and done heinous things, hence the only difference is that Jesus Christ died for my sins and that I’m saved by His blood as a free gift. Some didn’t understand so I preached again the message, thus the Gospel was preached more, one lady said “I have no idea what you are saying”, then I said “what is your life?” she was stunned in front of the crowd, then I said “your life is a vapor, you live, you work and you die, and you leave it all behind, and you will face God for your sins, and I’m saying that Jesus died to save sinners, you’re a sinner, so come to Him and be saved”.

I asked, during which, the crowd to examine themselves, test themselves if they’ve lied, stolen...etc… that if they have then God gives them what they deserve, but that Christ died for sinners so that all who come to Him will be forgiven. The Lord placed scriptures upon my mind also that I might say unto the crowd “come unto Me, you who are weary and heavy laden and I will give you rest”. Several people tried to prevent and stop us for the homosexuality issue, but I addressed them accordingly, the police showed up, some people called them because they felt offended, but the police were gracious, I managed to preach the Gospel to them as well, they did not get angry, which I appreciate.

Yet the amazing thing about all of this, was that a young asian man in the crowd had stayed and watched for the entire preaching. Afterwards he came to me to speak to me personally, I don’t know if he is saved or not, he said that he thinks that he has believed, but he feels that it is almost as if he believes and then he still feels like he lives in the world. I don’t know if he is a new Christian struggling with assurance, or if he is a false convert, but explained to him biblical repentance and faith and the fruits that accompany them. Yet the amazing thing was that he said that the day before he had slept and dreamed about Jesus and asked Jesus about repentance and he said that in his dream, Jesus told him to repent and thus he cried (though whether he cried in the dream or woke up crying I didn’t know) and right after that, the next day he runs into us and hears the preaching of the Gospel. I hear these things and I praise God for His providence, the young man’s name is William, do pray for him, that he would come to a saving faith in Jesus Christ if he is not saved, and grow in assurance if he is saved.

Overall, it was joy filled day as gospel went forth !! SOLI DEO GLORIA