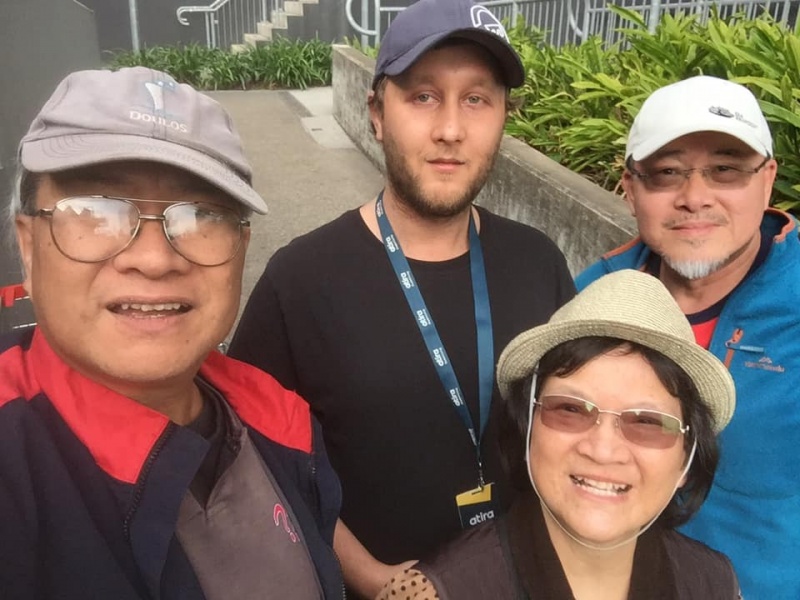 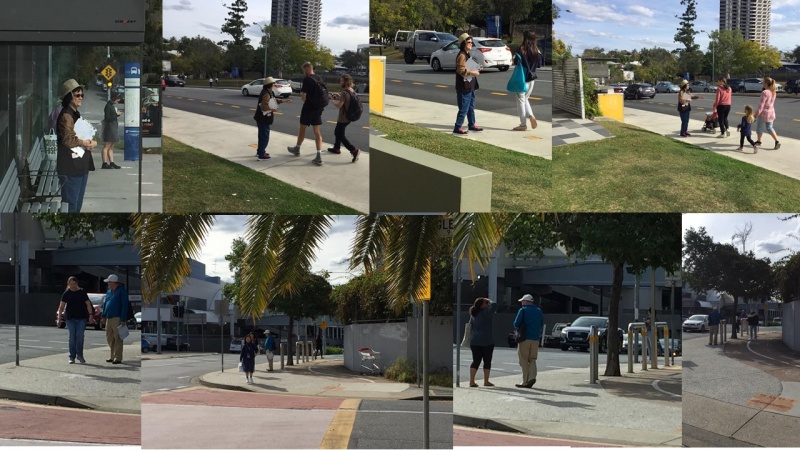 It was not yet another routine battle log. God by grace gave out some surprised divine encounters if not miracles after an initial fruitless dried period of 20 to 30 minutes. It was abnormally strange that we got 100% rejection for all the three of us as such Johnny had to resort to an extra second prayer to ask God for softening hearts and moving some elected ones to stop for a divine encounter. Believe it or not, the curse of complete rejection was lifted right away and both Johnny and Winnie started to have around 5 to 6 significant and fruit bearing conversations.

I chose to play a witnessing and supporting role on the sideline because of my cough not fully healed yet. Thus I myself only had three direct and a few more follow up chats with Johnny and Winnie as a team effort. It more so gave me a wider spiritual eye sight to see how God worked amongst us.

The work of God climaxed at the end. A Israelite Muslim man Jakob was stopped by Johnny as the last person in our 1.5 hour ministry period. He originally would have been missed out as Johnny already signaled us to quit for the day. Winnie was busy in writing her battle log note as such she failed to hear my calling for the day and started another conversation with an Aussie Lady that Johnny had just had a chat. So, Johnny could not but continue to reach out for yet another person that was Jakob. It ended up finding that he is a Jew but professing Islamic faith. Johnny was able to share the full gospel to him stressing the importance of Jesus bringing us the salvation by grace through faith. Their conversation was interrupted by a by stander who inadvertently saw me taking photo of Johnny and Jakob. So when we finally all finished and on our way back to Toowong Village for the closing prayer, Jakob waited to meet us for a clarification, God inspired me to testify to him that his conversation with Johnny was not short of a miracle as Johnny could have missed talking to him by a few seconds if Winnie did not miss my calling out to her to quit for the day. I stressed to Jakob that this was certainly a God led divine appointment and he is the elected one by God to hear the gospel without fail. We do pray that Jakob will be moved to receive Christ in His time.

Recap below are the Divine Conversation of Hung , Johnny and Winnie.

1) Robert a Fiji Man who received the tract from Winnie but did not stop. I volunteer to walk with him towards the shopping centre. It ended up finding out he is a Christian with 100% assurance of salvation.

2) While an English young couples were checking out the map after getting out from the bus , I took the chance to chat to the boy who was not sure about going to heaven as a good person. I barely had enough time to share the nutshell of the Gospel. Yet they the chat was cut short as they have to hurry for an appointment at Toowong Village.

3) Shirley an Aussie girl was polite enough to stop from listening to music on head phone but the bus cut short my sharing with only the tract being handed out to do the job as Will by God.

1) Johnny had chance to share briefly with two young Aussie girl while they were waiting at the traffic light.

2) Then came the Significant chat with a Korean lady whom Johnny quickly noticed she is a JHW believer as she denied there is hell. The conversation lasted for a long time over 20 to 30 minutes. As that lady attempted to evangelize Johnny to her faith. Johnny anyhow had done his job to share the Gospel and clarify all the doctrinal issues with her.

3) After that, Johnny talked with an Aussie girl who initially showed reluctance to stop. But Johnny still managed to share the full gospel to her who has no religious faith and has not heard gospel before. Trust the seed of Gospel should have been sowed.

4) Then Johnny got another long conversation with an local Aussie who claimed to be a Christian of Pentecostal background but is a heavy smoker. His understanding of the Bible and the full meaning of gospel and salvation is very weak. Johnny again did his job to clarify all the misconception of that man.

5) After that, an Indonesian woman passed by. Johnny followed her to the bus stop and found out at the end she is a Christian attending Stephen Tong’s Church. So her understanding of the biblical doctrine and assurance of salvation are all crystal clear. We could only praise God for this special Christian fellowship with people of other culture.

6) It was then followed by the sharing with the middle aged Aussie Woman I mentioned earlier. She is also a Christian but later when I tried to check out her assurance of salvation, she was not certain at all. My follow up conversation with her resolved this issue.

7) Finally came the sharing with Jakob that panned out to be a minor miracle showing God’s finger prints on this divine encounter.

1) 第一是伊拉克來的學生，願意信靠主。An UQ student from Iraq who is a Muslim but after sharing was willing to receive Christ.

2) 第二是 Eric, 本地 UQ 學生，曾犯罪，聽了福音後，覺得信靠就可以得永生，罪得赦免，願意信靠主，返 UQ 教會，尋求更多真理。Eric is a local Aussie UQ student admitting having committed many sins and was rejoiced to learn that his sin could be forgiven by accepting Christ. He was willing to attend church to learn about more Biblical Truth.

3) 第三是Lily, 本地天主教徒，她説大家都是信神，沒有分别。我説基督教是三位一體的神。不是信馬利亞，靠神父。耶稣基督為救贖我們的罪，被釘上十字架上。只要我們信衪，我們的罪便得赦免，便得永生。這是免费禮物。她説會尋求更多真理，明白多的。Lily was a local Aussie student of Catholic background who has not assurance of salvation. She promised to pursuit truth for better understanding.

4) 第四是Ella, 得救的基督徒，明白救恩，罪得赦免，每周都参加聚會，每天都禱告。我给她福音單張送给她的朋友。Ella is a fair dinkum Christian with full understanding of salvation. She got some tract from me for her friends.

5) 第五是澳洲女士，基督徒，Johnny 與她談話先，後到我與她談，跟着關牧師也到來。我們三人都分别舆她傾談。關牧師詳细講述得救確據，相信她肯定明白救恩。願神带领今天聽到福音的人士。The 5th was a middle aged Aussie lady who had a chat with Johnny but was not aware by me. She claimed to be a Christian, but when Rev Kwan joined the chat, it was found out that the lady did not have full assurance of salvation which was duly clarified by Rev Kwan. 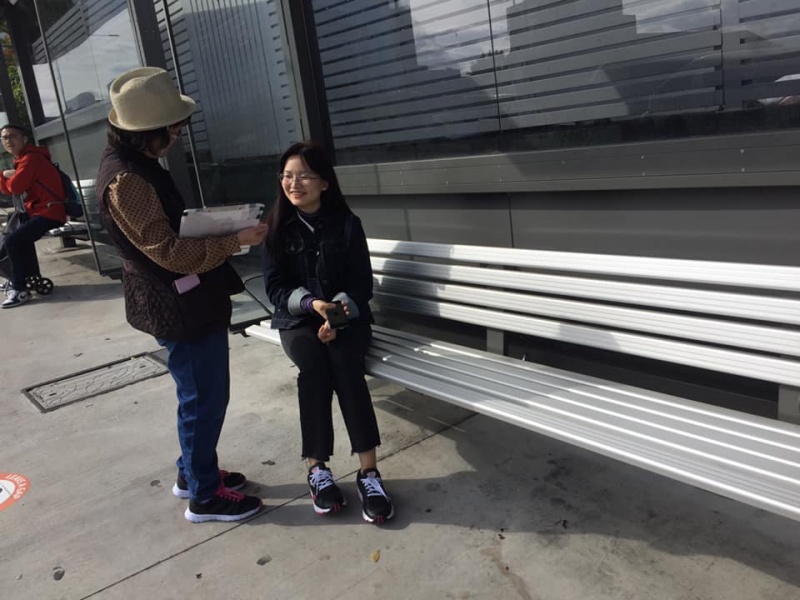 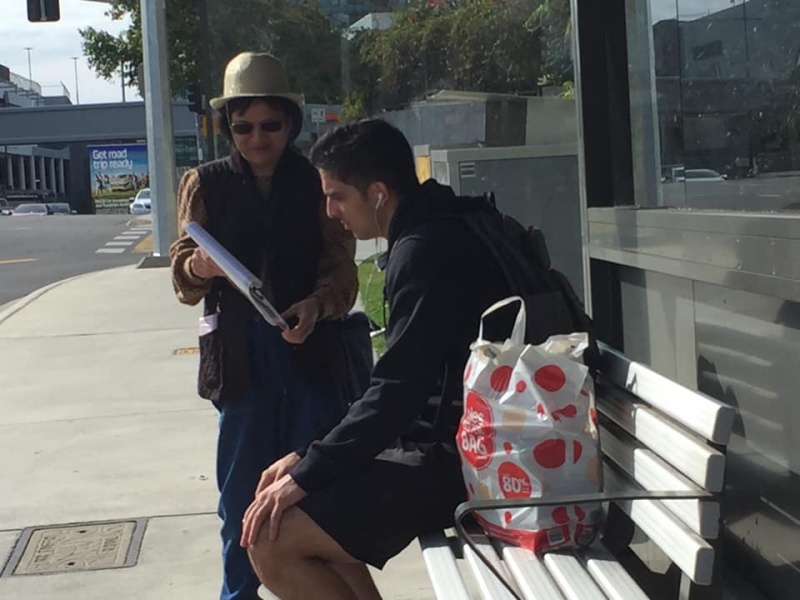 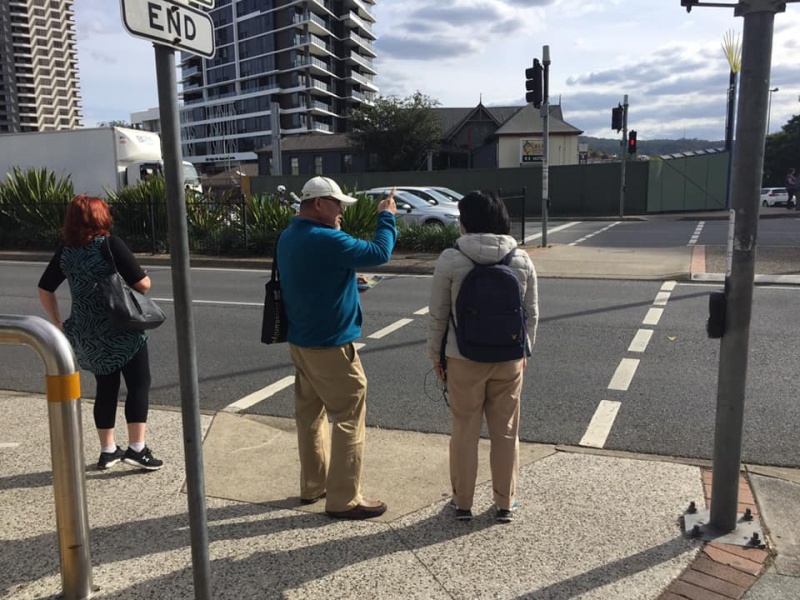 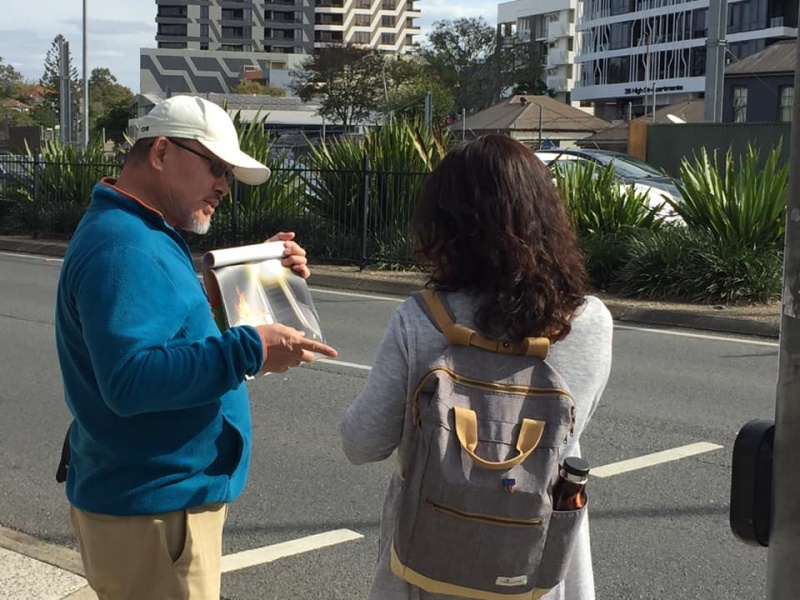 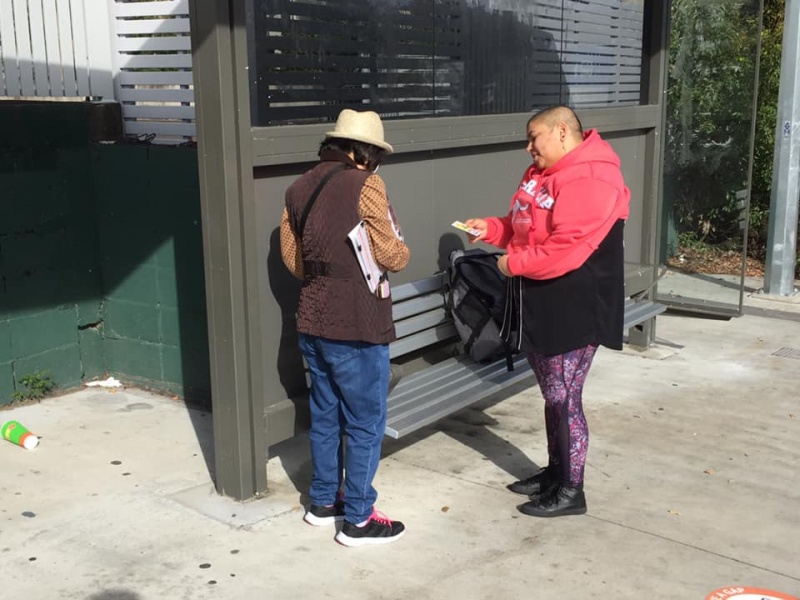 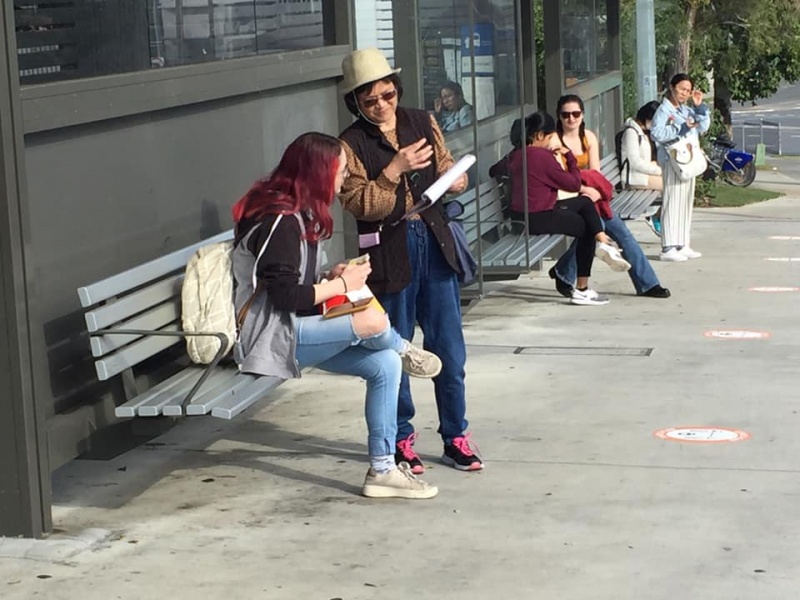 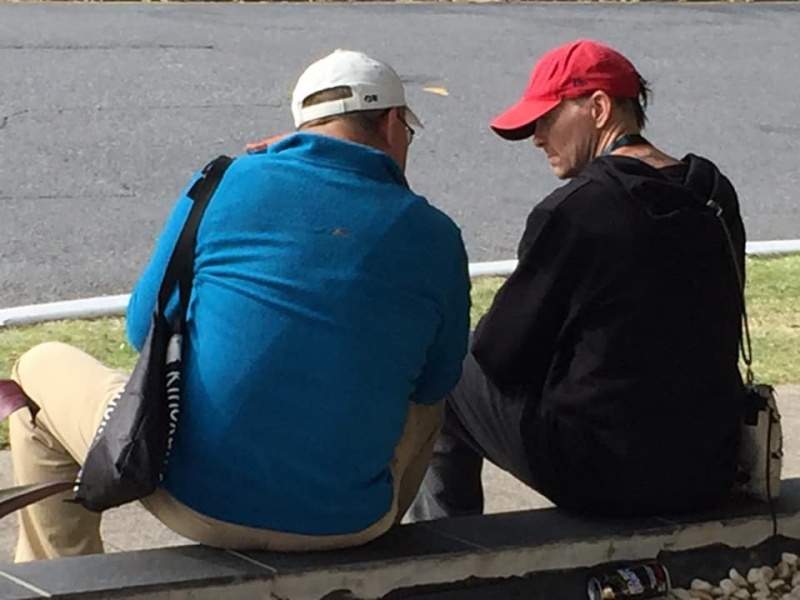 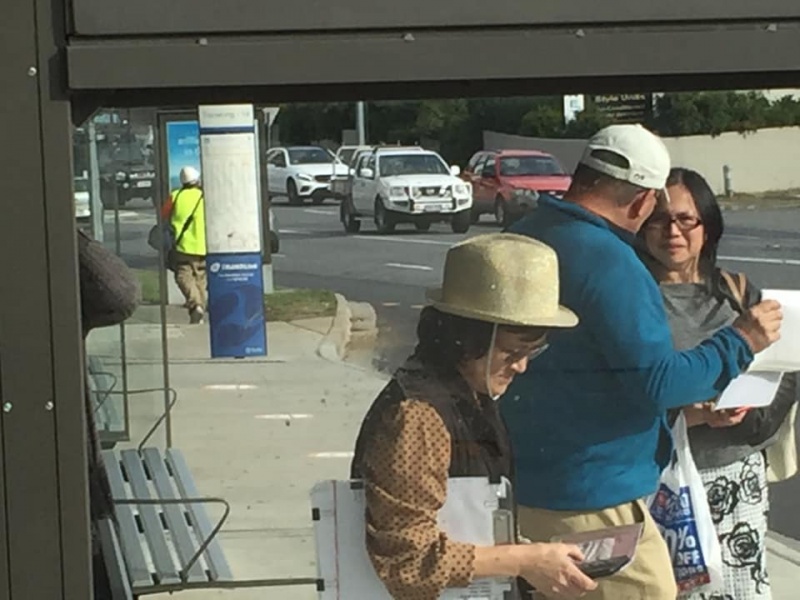 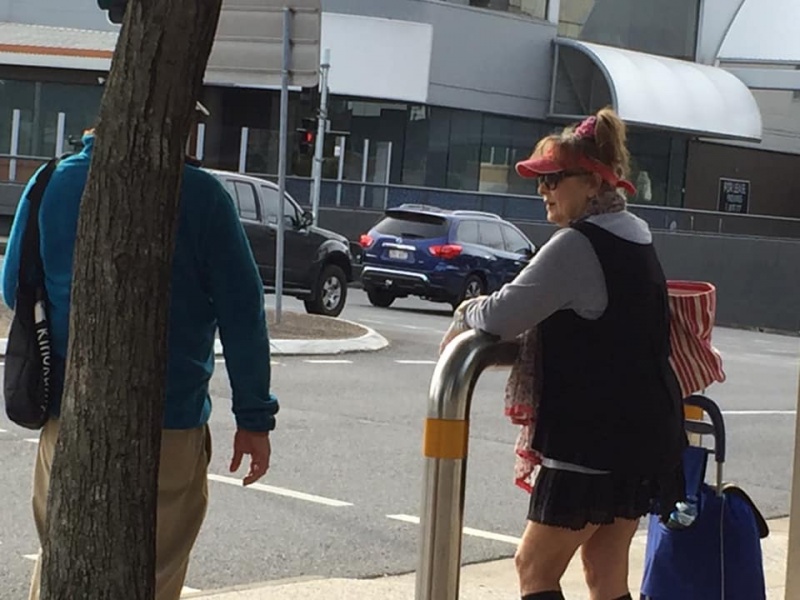 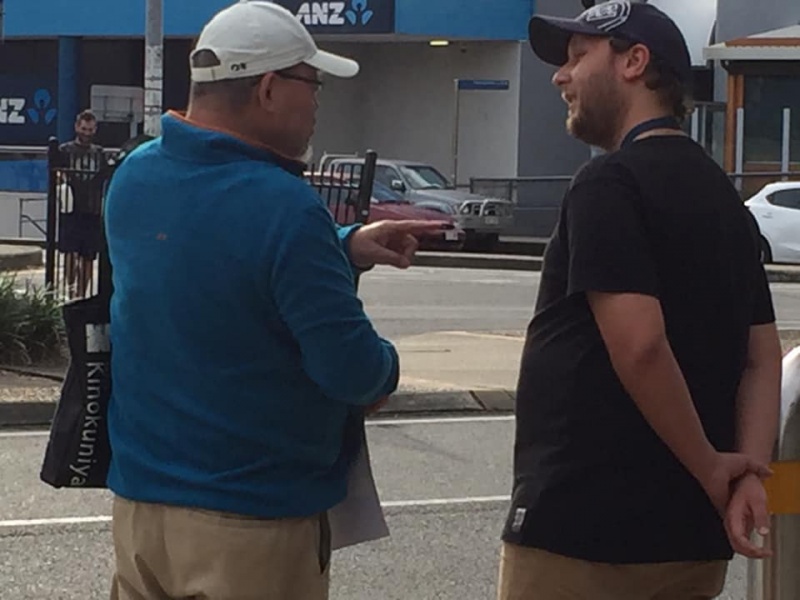