Newquay Evangelism: Atheism and the Gospel

It was an absolutely gorgeous summer’s day in Newquay; as a result the high street was jammed full of people who were out enjoying the sun. Upon arrival we found a nice spot for today’s outreach; as George and I set up the open-air board and literature table, Nigel and Ian began to hand out tracts. It was encouraging to see people take the printed page in order to read of salvation in Christ alone.

Once the open-air board was set up George began to preach. As he spoke a young woman walked past and yelled out, “I am gay. God hates me!” George replied by pointing her to the love of Christ, but the woman kept walking. What appeared to be a ‘drive-by’ comment would actually be a hook that drew this young lady back to the discussion later on.

George continued to preach for several minutes and then the young woman returned with her friend. She began to heckle, but she was one of those hecklers who would say her comment then let the preacher respond. George did an excellent job in reasoning with her and pointing her to Christ. By the end of the open-air she seemed to have softened considerably.

Of course heckling begets heckling; now that a young woman started the ball rolling the big burly men decided it was their time to jump in. My role was to engage these hecklers one to one as George continued to reason with the young lady. The first man I spoke to claimed to work in the science field, but it was clear he didn’t have an understanding of basic scientific principles. His main objections centred around the question of evolution and also the philosophical question of “Where did God come from?” I answered those questions then brought it around to the biblical message of salvation; whenever we got to the issue of sin and the gospel the man would engage in mockery.

His claim was that sin didn’t exist and that the world is good; keep in mind that he said this while wearing all the safety equipment to protect him from COVID-19. I used his face-covering as an illustration showing that the world is corrupted due to sin; but he he kept on rejecting the message. Finally, I encouraged him to simply go home and watch the news, then as he watches the reports about murder, violence, war and chaos sit back and say, “This world is good; there is no sin here.” The point was made, but his response was to scoff and walk away. 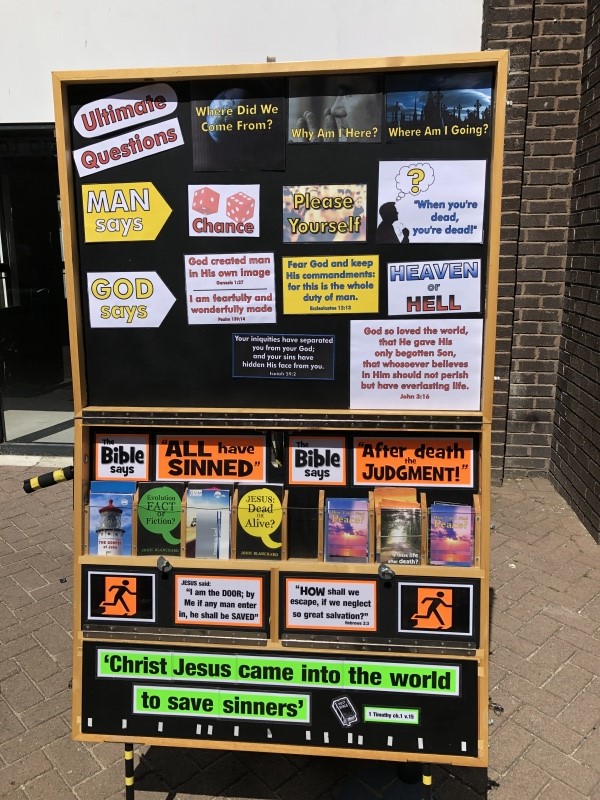 The next heckler I spoke to could have almost been reading from the same playbook, he too claimed to work in science and his main objections centred around evolution and where did God come from. I said to this man, “To ask, ‘where does God come from’ would be like me saying, ‘the Sun gives light, but who lights the sun?’” The man laughed at this and said, “The sun just is!” I smiled and replied, “And God just is. He is outside of time, space and matter; He is the uncaused cause of all things.”

The man then began to engage in the infinite regress fallacy, which I was able to answer; so finally he said, “Prove to me that God exists!” I pointed to one of the buildings which lined the high street and asked, “How do you know that building had a builder?” The man answered, “Because it is there. It is tangible.” I followed up by pointing to a painting in a shop window, “How do you know that painting had a painter?” The man replied again by saying, “Because it is there. It is tangible.”

I then asked him if it would be idiotic to say that tangible things, such as the building and painter, had no painter or builder?” He agreed it would be; so I asked, “You are tangible, as is the world and all created things. How do we know that you and all things have a Creator?” The man paused as he saw the trap that he was in - slowly he replied, “We just happened.”

My point had been made so he was quick to change topics; he began to argue that he knew for sure that the Bible was in error since it is full of contradictions; I asked for just one contradiction but he couldn’t produce it. Finally I said to him, “Jesus tells me why you are an atheist. You love your sin, and you hate the light. You won’t acknowledge God, even though you know He is real, because the moment you do you have to accept the fact that you are accountable to Him.” At this the man mocked and walked away saying, “This is getting too freaky.”

Truly the Psalmist spoke the truth when he said, “The fool has said in his heart, ‘There is no God.’ They are corrupt, They have done abominable works, There is none who does good.” (Psalm 14:1)

By this stage George had finished preaching so the hecklers disappeared back into the crowds of people. After letting the crowd move and change, I decided it was time for me to preach. Today I thought it would be good to use my flip-chart as a tool to assist in the open-air.

As I began to speak a few people began to gather to listen; I particularly enjoyed seeing a man leaning out of a pub window in order to hear the gospel. I used the flip-chart to explain that none of us are good people, and that we all need the Saviour. I had a few people make comments, but unlike George I didn’t have any good hecklers.

I am so thankful that the Lord allowed the gospel to go out clearly today in Newquay via tracts, one to one witnessing and open-air preaching. My prayer is that the Father would draw many to Jesus through these outreaches. 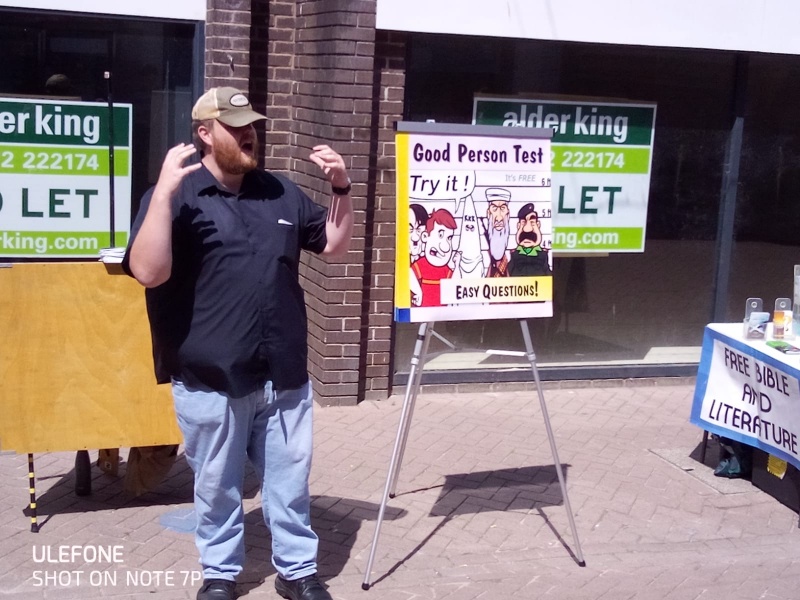