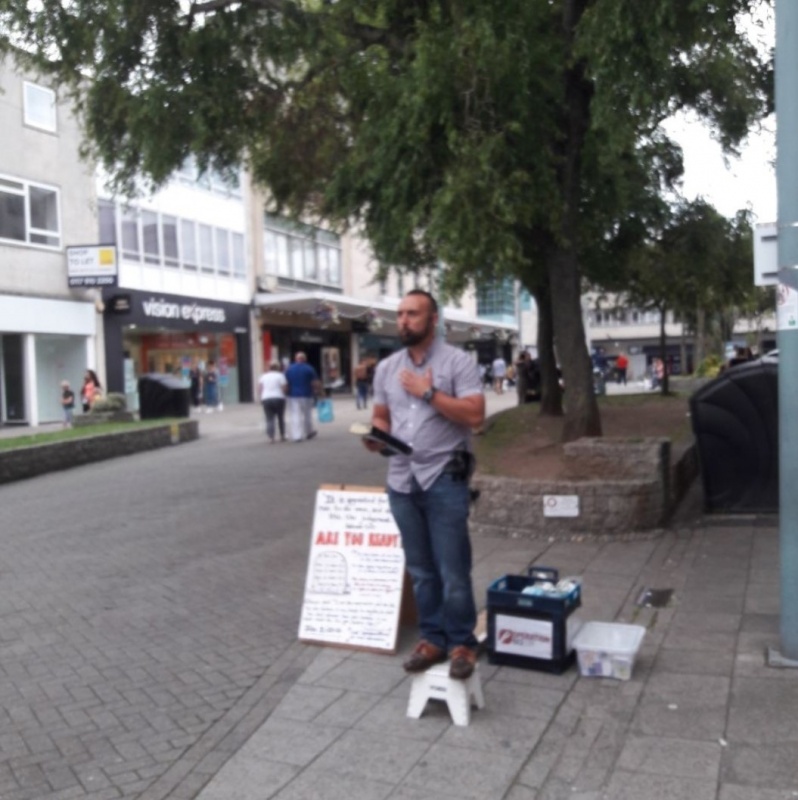 On Saturday I met one of our team members Laurie in the City Centre again to preach and hand out tracts as was another glorious day. While walking up to our spot I passed 5 older teenagers sitting talking on a wall, and asked if they fancied doing a quick intelligence test in a few minutes if they thought they were smart enough?! They laughed and joked about who was the smartest, and thankfully after setting up the stuff they walked up to answer the questions.

It turns out they attended the same school I had over 23 years ago and knew some of the Teachers that had taught me that were still there! I said that the intelligence test dealt with their brain and intellect, but the good person test dealt with morality. I asked them if they had a conscience and if they ever listened to it? We had a very good discussion and they stayed and listened for around 20 minutes which was great, taking tracts and becoming quite somber when listening to what the gospel message entailed, especially seeing the picture of Jesus taking the wrath of God on the cross in the place of sinners, and how they could be forgiven too.

I went to the toilet and when I came back, Laurie was in discussion with a Deliveroo driver from the McDonalds we are normally right outside. He was a Muslim and Laurie asked if he had any assurance that he was going to Heaven as a Muslim? He said he didn't but again hoped that Allah forgave due to confessing sins and doing good. Laurie spoke with him about why a good judge can't let someone off the hook for just saying sorry or trying to outweigh the bad with good, and explained why Jesus was the only person who could pay for his sins in full as he was 100% man and 100% God. The man just believed Jesus was a prophet etc, and said he would never believe anything different about Jesus, but took some tracts to read which was good before he zoomed off for another delivery.

After handing out some more tracts, Ed from our team came along, and so patiently listened to me preach about the fear of the Corona virus, losing jobs, money etc that all of society had, and the masks that people were wearing to try and cover up their mouth to protect them. I tried to link this to man trying to cover up his sins with good works, and how all other religions fail to do this, as seen with Hindu's repeatedly washing themselves in the dirty river Ganges every year which they think makes them clean, is what our good works are like to God. I also tried to explain that stapling on apples to a dead apple true will not convince anyone that the tree is alive, and that a bad tree will always produce bad fruit, which is why although people try and do 'good things' it is always tainted with sin because we have a heart born in sin and so will always produce bad fruit.

I showed that in Adam, we are all born in sin, and we needed to be transplanted into Christ, to have a new heart with new desires and start again, instead of covering up, and that Christ offered them that fresh start and cleansing from sin today!

A few people passed by and stopped to listen, one man that sells the Big Issue walked past and commented that if God existed why did his brother die. I said it was because of sin that all of us will die, and the man exclaimed that his brother had never sinned and was a good person, and didn't like my response that we have all sinned in various ways. He walked off cussing and swearing. Later 2 PARC officers that deal with City Centre incidents before the Police arrive, stopped to listen to me preach (with a small amp on) and radioed to their superiors of what I was doing. Although I presumed it was about a complaint/ too loud, they apparently said to Ed that if I mentioned Covid 19 and if a member of the public complained then I would have to stop preaching, but fortunately no one complained and I finished without any problems.

A youngish couple had been sat on a bench listening for a while, and Laurie went across to speak with them and share. They were from Romania and listened intently as Laurie shared the gospel with them and gave some tracts. Also earlier on a man that looked like Robert Downie Junior/ Iron Man look alike sat down and listened to the preaching and had long chat with Laurie and I afterwards. He was convinced the masks were pointless and that this was all a hoax from the government and a way of controlling people. He had a Buddhist/ New Age background of sorts, and at times agreed with what we all shared, and other times didn't, but he took a Bible and some tracts that we offered him and he was very grateful and gave us a hug! He said he had seen us here before so hopefully we will bump into him again.

It was a good day, and after a bit of a slow start was very encouraging, and we prayed for the people we had spoken to that day before going for coffee and fellowship. We hope to go back to Exeter and down to Newquay soon to meet up with Josh and his team again, and were very thankful that God gave us people that were open to listen to the gospel message and we just pray they see Gods goodness in the gospel that would lead them to repentance.